David Krut Projects is please to announce the completion of the fourth large scale Woodcut That which I do not remember in the ‘Triumphs and Laments Woodcuts’ series.

In early 2016 William Kentridge was at work on a monumental frieze to be installed along the banks of Rome’s Tiber River in April of the same year. The 550 meter work would be stenciled onto the wall of the river from Ponte Sisto to Ponte Mazzini. It would be called Triumphs and Laments and would consist of scenes from the cultural and political history of Rome from drawings that Kentridge had been preparing in his studio in Johannesburg for a number of years.

In January 2016 Kentridge also began discussions with a long-time collaborator, Master Printer Jillian Ross of David Krut Workshop (DKW), about using these drawings as the basis for a series of large woodcut prints. Ross and her assistants Sbongiseni Khulu and Chad Cordeiro began extensive tests on a grouping of three figures from the frieze as this would be their first woodcut project with Kentridge. Over the course of 2016, the printing team worked on creating and editioning the first two woodcuts in the series, Mantegna and The Flood; in January 2017, work commenced on the third image in the series, Lampedusa (see insert).

Work began on the fourth woodcut in March 2017, titled That which I do not remember. Whereas previous images chosen as references for this series were either adapted or drawn from moments in Roman history, this is the only original image by Kentridge portrayed along the wall of the Tiber River. It is a black mass with the Italian phrase “quello che non ricordo” which translates as “that which I do not remember.” Kentridge states that this work is not only “about a personal loss of memory, [but also] about the things that society wants us to forget, a sort of  ‘fill in what you want’ for what we do not want to remember.” The finished print is 2.1 x 2 m and is printed from 13 woodblocks. It is comprised of 29 sheets adhered by 56 aluminum pins.

The initial arduous process of recreating the Kentridge drawing in wood presented the printing team at DKW with a unique set of technical challenges in the first print of the series. Ross wanted to experiment with multiple wood types to achieve a variety in woodgrain and printed mark. Before settling on the size of the work, the printers tested a wide range of papers and timbers. Wood expert Alan Epstein assisted them by building woodblocks from multiple timbers, using thick veneers from the middle sections of the tree and reinforcing the blocks to prevent warping.

Ross advised her team of carvers to experiment as much as possible with different tools and mark making ‘to allow for potentially strange and surprising results to emerge in order to help fully appreciate the possibilities of the material.’

The scale of the series had been carefully deliberated over in the first woodcut, Mantegna. Given that the reference images of the frieze along the Tiber River are ten metres high, the DKW team decided to push the boundaries of the woodcut medium and work as large as possible for the entire series. Kentridge thus produced a drawing for Mantegna of two square metres from which the printers would work. For That which I do not remember Kentridge produced a drawing to scale of roughly two metres square. Since the initial drawing was too large for the printing press to accommodate the size, it was decided that the entire series of prints would have to be an assemblage of paper sheets that would fit together like a puzzle.

Similar to the second and third woodcuts, The Flood and Lampedusa, Kentridge’s drawing of That which I do not remember was made on accountant’s ledger paper.  The sheets were overlapped and adhered together to form the base of the drawing; Kentridge further drew onto these with India ink, charcoal, and red pencil. Given that this was to be the continuation of a series, there are similarities found in Kentridge’s approach to creating his drawings; however, he provides new challenges for the DKW team with each new print. For That which I do not remember the challenges were how to break the flatness of the black mass with minimal carving as well as how to allow for the woodgrains chosen for the woodblocks to speak for themselves.

Traditionally, woodcuts are printed on thin Japanese paper upon which the grain of the wood can be exposed with relative ease. Kentridge’s initial drawing of the series was done on Hahnemühle—a thick paper traditionally used to print etchings—that proved too soft and malleable for an assembled print.

Three hundred gram Somerset Velvet, Soft White paper was selected for its rigidity and overlaying possibilities. Decisions of how the paper would overlap, whether the prints would be printed to the edge, and how they would relate to the previous images were all carefully considered in creating each print of the series. Once this was decided, the question then became how to create the woodblocks to suit each image. 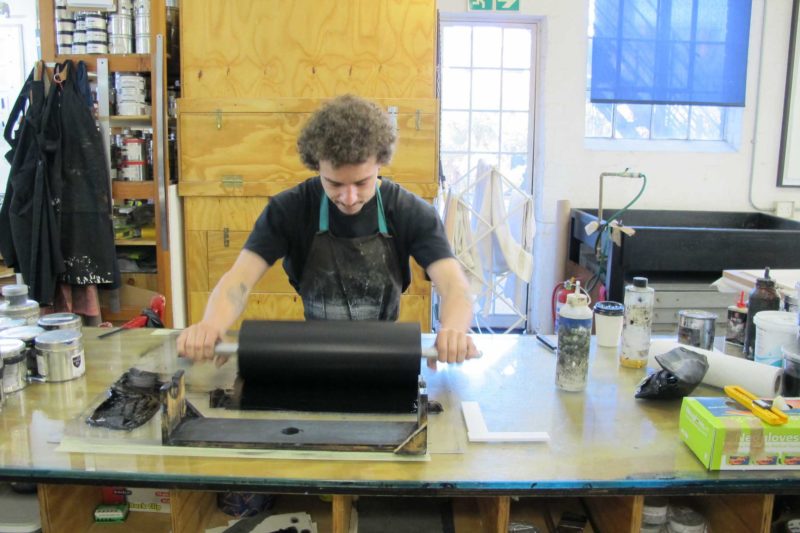 Many types of wood were chosen for their grain effects as well as their density. Soft woods produced dark sections in printed form and allowed for easier carving, while more heavily-grained hard woods allowed for expressive gesture in both the carved mark and the printed sections. An integral design element is found in the angles of both the blocks and the paper. With That which I do not remember, Kentridge provided the DKW team with a sketch that outlined the timber direction he would like used (see page 1). Each timber the DKW team chose was placed to create and punctuate movement within the black mass. To do this, both very large and strangely-shaped woodblocks were created. Working closely with Kentridge, the printers discussed and elaborated multiple printing options. The blocks were created section by section, week by week, to allow for an understanding of the printed result.

The woods selected for That which I do not remember were Panga Panga, Ash, Poplar, Maple, and African Walnut. Panga Panga and Ash are both heavily-grained, dense woods whilst Poplar, Maple, and African Walnut are lesser-grained woods. The denser-grained woods were chosen to allow for a blacker finish, and each type of wood was placed in an area to suit the specifics of the image. Additional lines were created by the placement and the grains of the timbers, the woodblock edges, and the hard and soft paper edges. Because Maple and Poplar are softer timbers, this highlighted contrast provided for a range of carving possibilities and allowed moments of soft, subtle blacks.

Using the guidelines that Kentridge provided, the carvers set about recreating the artist’s vision for the woodcut. Carvers were asked to rotate the blocks between them every three minutes when carving to prevent a particular carver’s mark becoming dominant, and they were instructed to follow the angles provided by Kentridge in drawn form or the angles found in the woodblocks themselves.

There are 29 sheets of paper in the final That which I do not remember print. All were printed from five types of wood timbers. The DKW team worked to ensure no technical restrictions existed to limit the artist’s working process as some sheets were cut at sharp angles, others torn. For this print Kentridge tore sections from the corners of some of the printed sheets to place them elsewhere and went so far as to tear one print in half to change its placement slightly. Layering these torn sheets became more elaborate. Pieces were attached to the work by Kentridge in the last stages of production and allowed for overlaps of image and movement. Torn pieces from one of the blocks used in Mantegna and one of the blocks used in Lampedusa were repeated here.

Pins were used for the final assembly of the work and to ensure that each sheet rests correctly on top of the next. Guidelines were provided on a map made on acetate and in an instruction  manual.

The final result makes reference to the reverse graffiti technique used in Triumphs and Laments. In the frieze the erased biological patina from the natural stone wall eventually comes through into the image, and in the print the natural grain of each wood timber is an important part of the work.

That which I do not remember was produced over seven months from 27 March to 31 October 2017. The collaborators were Master Printer Jillian Ross; carvers and printers Sbongiseni Khulu and Chad Cordeiro, with assistance from John Woodward; and wood expert Alan Epstein.

In 2017 That which I do not remember will be exhibited for the first time on William Kentridge’s solo exhibition, That Which We Do Not Remember, at the Goodman Gallery in Cape Town.

The other two works made in the series: