In early 2016 William Kentridge was at work on a monumental frieze to be installed along the banks of Rome’s Tiber River in April of the same year. The 550 meter work would be stenciled onto the wall of the river from Ponte Sisto to Ponte Mazzini. It would be called Triumphs and Laments and would consist of scenes from the cultural and political history of Rome from drawings that Kentridge had been preparing in his studio in Johannesburg for a number of years.

In January 2016 Kentridge also began discussions with a long-time collaborator, Master Printer Jillian Ross of David Krut Workshop (DKW), about using these drawings as the basis for a series of large woodcut prints. Ross and her assistants Sbongiseni Khulu and Chad Cordeiro began extensive tests on a grouping of three figures from the frieze as this would be their first woodcut project with Kentridge, titled Mantegna.

The image chosen for Mantegna is based on a group of nine paintings entitled the Triumphs of Caesar (1484–1492) by Andrea Mantegna (1431–1506). The sixth panel of the Mantegna series, Corselet Bearers, would form the main point of reference for the first woodcut in the Kentridge series.

Work began on the second woodcut in the series in July 2016, titled The Flood. Whereas the drawing for Mantegna was based on a series of paintings, the image of The Flood draws its inspiration from a photograph found online of Romans seeking refuge from the devastating effects of the Tiber River flood that ravaged Rome in 1937.

Work began on the third woodcut in January 2017, titled Lampedusa. The image Kentridge chose as reference for this work was a photograph of a group of Eritrean widows taken during a memorial service held in Levinsky Park, Tel Aviv in 2013. The service was in memory of the victims of a shipwreck off the island of Lampedusa on October 3 of that same year. Lampedusa focuses on one widow with her face hidden.

Each print is made from multiple blocks of wood, prepared from a variety of woodgrains, and printed on several sheets of paper that, when assembled, fit together like pieces of a puzzle. Some paper sheets are cut at sharp angles, while others are torn. Sheets that the artist attached to the work in the last stages of production allow for overlaps of the image and give a sense of movement throughout the work. Pins are used for the final assembly of the print and to ensure that each sheet rests correctly on top of the next.

Each print comes unassembled. In order to put these works together, the following contents are included: 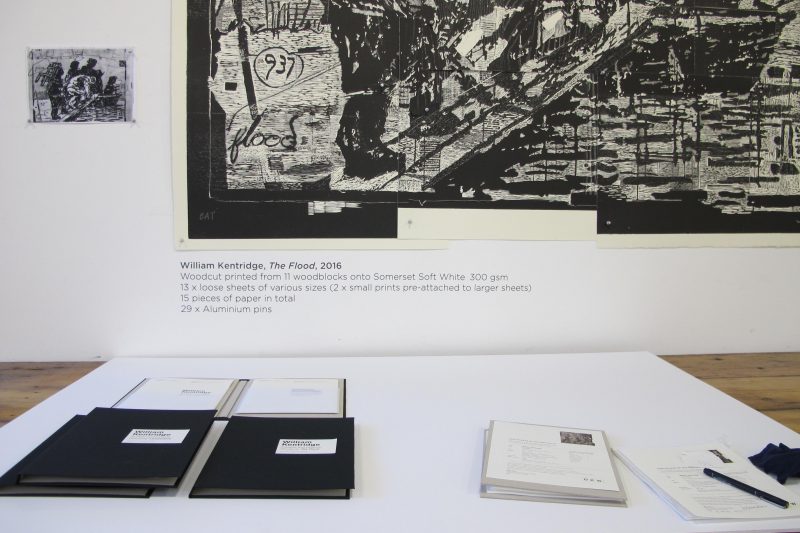 ‘The Making of Triumphs and Laments Woodcuts’ will be exhibited from 6th  of July at 142A Gallery, Jan Smuts Avenue, Parkwood, Johannesburg.

Gallery Hours: Tuesday to Friday 9am – 5pm | Saturday 9am to 4pm