Deborah Bell’s initial ideas are often conceived from her visual notebooks, where the spontaneity of her quick, private drawings seem to capture the figures in a gestural moment. In the making of her plates, Bell’s ideas develop and evolve with her working physically, pushing and pulling the images through scratches, gouged marks and burnished tones – much like the sculptor she is.

“Sometimes I will take a small insignificant detail from a large painting or make quick sketches of different artefacts in a museum case along with their shadows. These all get crammed into the notebooks and often a relationship is set up between the images drawn on a single page which then become the source for a new work. I see these notebooks as my dictionary; each image is like a word that I can juxtapose to create a story, a poem. I realise that I do have a certain code of honour. I would not borrow an image from a contemporary… that would feel like imitation. However, works such as Velasquez’ ‘Las Meninas’, which have become icons and stand for themselves as objects in history, are for me just another source for inspiration.” – Deborah Bell, 2017

“Working in this way suggests an evolution of ideas that takes into account someone else’s genius. I look at Picasso looking at Rembrandt, looking at African masks, looking at Velasquez. At no time was he trying to imitate them. They were just his new raw material. During my last trip in Paris, I realised that I went to museums with the attitude of a thief. Once there, my eyes are constantly scanning – looking for the main chance as it were. I am not interested in the history, culture, or even the intended meaning of the works. I am looking for some object and painting that offers something I can use, something that has some meaning for me. And the quick visual notes that I make don’t even look like the original; they change through their drawing.” – Deborah Bell, 2017 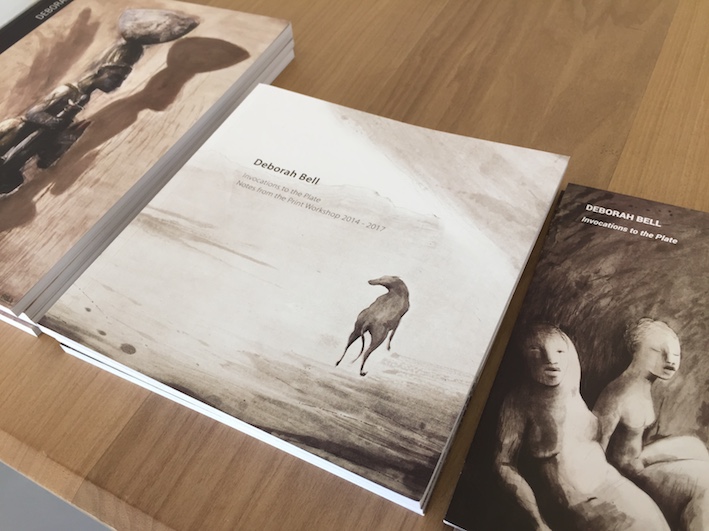 A book was published in 2018 to accompany her exhibition Invocations to the Plate. The book is available in our bookstores and also online.

Deborah Bell Invocations to the Plate: Notes from the Print Workshop 2014-2017

A Conversation with Phil Sanders