In 2018, the Kampala Art Biennale (KAB) has taken on a new format for its third edition. Titled “THE STUDIO”, the biennale will be orientated around the notion of knowledge exchange and the relationship between a master and apprentice. The practise of a Master artist sharing their skills with young apprentices has long been a tradition through the world, within the 2018 KAB, the practise is brought into the limelight. KAB saw it as an opportunity to celebrate and encourage the tradition among artists. KAB 2018 curator Simon Njami decided to invite seven internationally renowned artists to open their studios, knowledge and their expertise in Kampala to young Ugandan, African and international artists. Ethiopian based artist Aida Muluneh was the first of those artists, mentoring a new generation of photographers.

For Muluneh, this was not her first workshop by any means. Education has played an important role in her artistic practise. Muluneh sees art and photography as a way that she can uplift and create positive change in her, and education is the best place to start. In the KAB’s programme, she worked with five apprentices from Uganda, South Africa and Madagascar. During the programme each apprentice had the opportunity to share with Muluneh their photographic practise and their future photographic projects. She played the role of advisor by giving input into their photographic work and teaching valuable skills through presentations and allowing them to gain practical learning experience by assisting her in her professional shoots in Uganda.

For the apprentices, Muluneh placed a strong focus on three key elements in photography. First the technical aspects, ranging from setting up a camera, light equipment and working within a studio and with a model. She explained that without knowing and having proficiency in all technical aspects of photography, it hinders the photographer’s ability to progress. Secondly was the ability for a photographer and artists to tell a story. This extends to Muluneh’s encouragement of the participants to find their own voices, to find their own unique way of creating through which they are able to tell a story in their work. The ability to tell a story is one of the most important aspects of a photograph as it is what the viewers may or may not respond to. Thirdly, Muluneh emphasised that the photographers need to be producing work constantly. It is through this continuous production of work that photographers are able to find their own voice, refine the ability to tell a story and develop their technical skills. Muluneh offers the advice that they should at least shoot a frame a day, as a single frame may lead to future possibilities.

The KAB programme formed part of a larger project as Muluneh, in addition to the KAB mentorship program, also visited Uganda to work on a new body of work and looking at heritage sites within Africa. Muluneh focused on two main locations, Nyero Rock Painting site near Kumi and an abandaned warehouse next to the Design Hub Kampala. Before arriving in Kampala, Muluneh had the Nyero Rock Painting Site in mind as it is one of the few pre-colonial heritage sites near Kampala. The Nyero Rock Painting sites date back to 1250 AD where today a small self-sustaining farming community still resides. The rock paintings are largely geometric in nature representing the sun and moon, the forest surrounding the hunter-gatherers at the time and the people themselves. While photographing on site, she realized that the site held more significance than what she first anticipated, as the rock paintings astrological subject formed connections to ideas she has been exploring in previous work.

Muluneh has both a systematic and organic methodology when working on a shoot. She starts by mapping out the shot in a sketchbook, exploring costumes, make-up, choreography and composition. Once on site, Muluneh references the pre-planned sketches and begins to compose an image with the lighting, camera and model. One of the areas where Muluneh’s organic methodology comes into effect is when shooting in unfamiliar locations. She always expects the unexpected, anticipating where things can go wrong and uses creative solutions to create her iconic images. Through this, locations and their history become deeply embedded in the meaning behind her photographic work. Muluneh’s organic methodology comes into effect when working with rather than against the environment at the Nyero Rock Painting site. This involved Muluneh changing her approach and sent the model up the rock face to take advantage of the natural light and composition. It’s with the openness to adapt that has made Muluneh so efficient in a shoot. It was this this new composition upon a rock face that Muluneh drew a close to the first shoot location.

Another aspect at play while on set is Muluneh’s connection with the model. One of the characteristics she looks for in a model, is a natural confidence. That confident energy that a model brings to a shoot carries through in the final photograph. While on set, While on set, Muluneh and the model have a conversation that brings Muluneh’s concept and sketches to life, telling that all important story. The story comes through in the photograph as a whole but is emphasised by the model’s poses and eyes. Directing and working with a model was one of the lessons Muluneh gave the apprentices. The ability to successfully direct a model and have that “conversation” that Muluneh refers to is an important element translating that story in the photograph.

During the workshops Muluneh and the apprentices were based at the Design Hub Kampala, which is a unique creative design space in the old industrial area of Kampala. Here various creatives from fashion designers, architects and small start-up businesses are operating. On the second day of the workshop, Muluneh took the apprentices out to photograph and explore the Design Hub Kampala where they came across an abandoned warehouse. There are many spaces like these in the old industrial area, and this particular warehouse became the impromptu second shoot location. The afternoon before the shoot, Muluneh explained her sketches and concepts to the apprentices so that they could begin preparing the sets for the shoot. After the briefing, the apprentices were off to get the necessary materials and props for the following days shoot. This was their opportunity to apply some of the skills they learned from being on set with Muluneh at the Nyero Rock Painting site.

For the second shoot, Muluneh collaborated with a young local Ugandan fashion designer Daphne Nakabugo to add Ugandan accent pieces to the artists pre-existing blue and red costumes, which were were used for both the first and second shoot locations. This involved adding high triangular shoulder structures to the dresses, an element quintessential to traditional female Ugandan attire. It was important for Muluneh to add these elements of Ugandan tradition since it was where she was photographing; it becomes a celebration of that tradition. Once again showing the locations and their history become deeply embedded in her work. 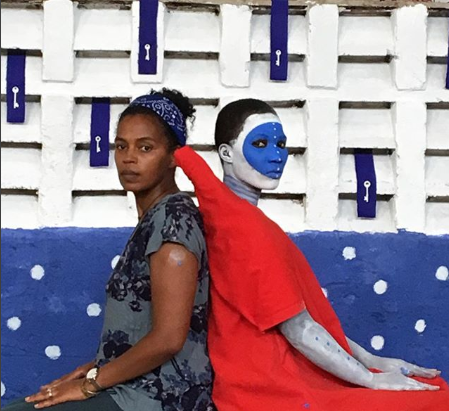 The seven day workshop fully embraced the Master and apprentice ethos that the 2018 KAB rooted itself in. Muluneh, through her one on one session with the apprentices and by having them assist her in shoots, was able to teach the apprentice what it means to her to be a photographer. With the aim of wanting these emerging photographers to succeed, Muluneh passed on some of the important lessons by giving them technical advice and demonstrating the hours of dedication, passion and hard work it takes to be a successful photographer. The apprentices were left with an experience like no other, where Muluneh gave them the skills, knowledge and push they needed to progress to become storytellers that are continuously creating.

To find out more about the KAB have a listen to a podcast with Kampala Art Biennial Director Daudi Karungi.