With the completion of three large scale woodcuts Mantegna, The Flood and Lampedusa, Kentridge provided the David Krut Workshop team with the next image, and challenge, as the series continues.

As with the first three prints the process begins with a drawing. The scale of the series had been carefully deliberated over in the first woodcut, Mantegna. Given that the reference images of the frieze along the Tiber River are ten metres high, Master printer Jillian Ross and the DKW team decided to push the boundaries of the woodcut medium and work as large as possible for the entire series. Kentridge thus produced a drawing for Mantegna of two square metres from which the printers would work.

Since the initial drawing was too large for the printing press to accommodate the size, it was decided that the entire series of prints would have to be an assemblage of paper sheets that would fit together like a puzzle. The drawing for this fourth image is roughly 2 meters squared.

Similar to the second and third woodcut, The Flood and Lampedusa, Kentridge’s drawing was made on accountant’s ledger paper with fine text as part of the background. The sheets of ledger paper were overlapped and adhered together to form the base of the drawing; Kentridge further drew onto these with India ink, charcoal and red pencil.

The initial arduous process of recreating the Kentridge drawing in wood presented the printing team at DKW with a unique set of technical challenges in the first print of the series. Ross wanted to experiment with multiple wood types to achieve a variety in woodgrain and printed mark. Before settling on the size of the work, the printers tested a wide range of papers and timbers. Wood expert Alan Epstein assisted them by building woodblocks from multiple timbers, using thick veneers from the middle sections of the tree and reinforcing the blocks to prevent warping.

Ross advised her team of carvers to experiment as much as possible with different tools and mark making ‘to allow for potentially strange and surprising results to emerge in order to help fully appreciate the possibilities of the material.’

Many types of wood were chosen for their grain effects as well as their density. Soft woods produced dark sections in printed form and allowed for easier carving, while more heavily-grained hard woods allowed for expressive gesture in both the carved mark and the printed sections. An integral design element is found in the angles of both the blocks and the paper as well as in the gestural features of the figures. Working closely with Kentridge, the printers discussed and elaborated multiple printing options. The blocks were created section by section, week by week, to allow for an understanding of the printed result.

The woods selected for the latest print are Panga Panga, Poplar, Maple, and African Walnut. Panga Panga is a heavily-grained, dense wood whilst Poplar, Maple, and African Walnut are lesser-grained woods. Panga Panga chipped and splintered when it was carved in a direction opposite to that of the grain. Because Maple is a softer timber, it provided for a range of carving possibilities and allowed moments of soft, subtle blacks. The denser-grained woods were chosen to allow for a blacker finish, and each wood was placed in an area to suit the specifics of the image.

Having identified the woods needed to produce the desired effect, woodblocks were made to render the naturally occurring angles found in the image and within the woodblock itself. These angles are found in the face, foot, and elbow of the widow enhancing the idea that the figure is walking away from the viewer. 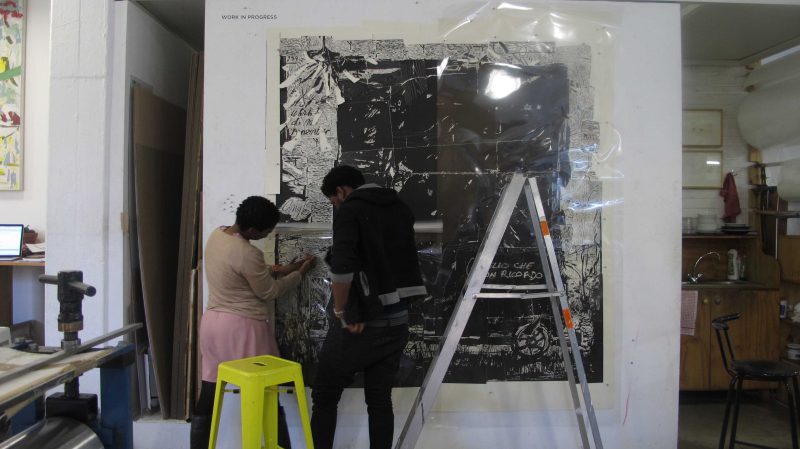 The fourth image is still a work in progess and is nearing its final state. It will be completed and released in the coming months.

An exhibition of The Making of Triumphs and Laments Woodcuts is currently on show at David Krut projects, 142A Jan Smuts, Johannesburg. Show ends 30 August 2017.

Read more about the first three prints in the series here:

The Making of Triumphs and Laments Woodcuts