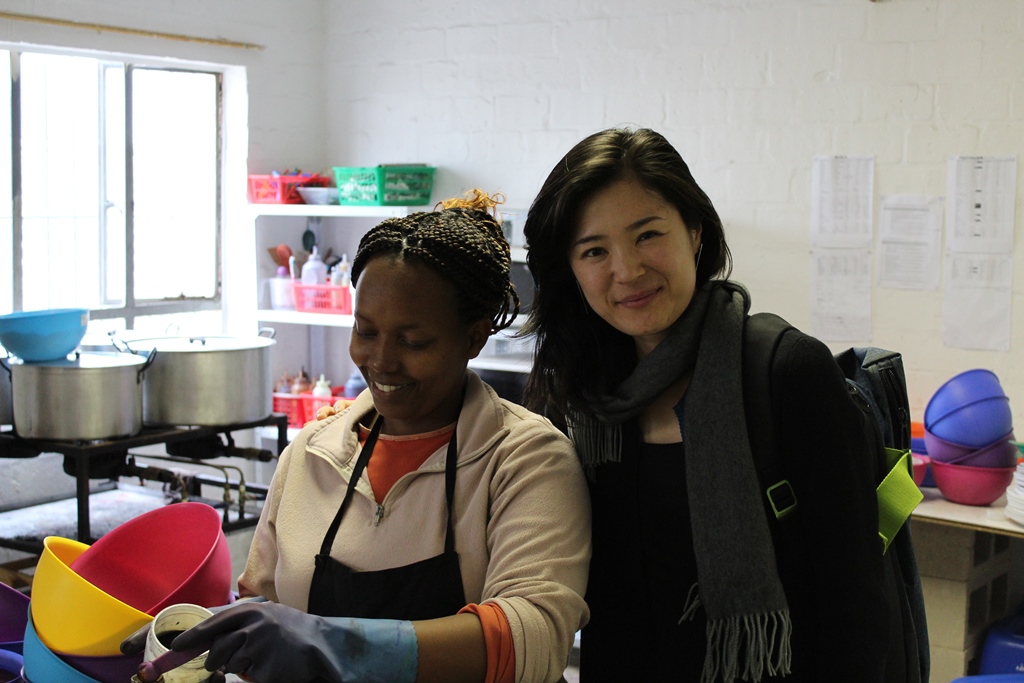 Asuka and Francine, who is busy dyeing a selection of wool.

On Friday 5 May 2017 Asuka Nirasawa, our current artist-in-residency at David Krut projects Cape Town (DKCT) visited the studio of the designer, Bridget Henderson. Cowgirl Blues is based in the creative suburb of Woodstock and is described as a ‘dye house and design studio’.

The reason for the visit was for Henderson and Nirasawa to discuss their use of fabric and material in their creative practices and pursuits. Bridget utilises wool and mohair in her designs that includes a range of products such as throes, shawls, skeins and scarves. She has exhibited work in Japan at various design expos.

This visit enabled Nirasawa to see how Henderson’s team works in creating new products that includes the spinning and dyeing of wool and mohair. Henderson works with a team of six creatives. The production of fabric begins with the soaking of fabric in vinegar on a pot. The designer is then able to include items in the fabric such as leaves and bark, rolled and tied with string. These items leave the fabric with a negative imprint.

During their discussion Henderson learnt more about what Nirasawa’s practice entails and why she has decided to use fabric in her work. Much of this influence began when Nirasawa was working at the Bag Factory in Johannesburg in 2016. She started sourcing a range of fabrics and materials from the Oriental plaza, which she then continued to work into. This included the addition of dots onto the surface of the fabric. Nirasawa began to see a similarity in the circular textile patterns to that of cells viewed in vivid detail under a microscope. Another crossover is the connection of fabrics being made in Asia and imported to Africa. This links into the South African textile industry that employs many South African designers.