On entering the AOM workshop, architect-come-fine-artist Lorenzo Nassimbeni is already in work mode, pacing with a mug and a pen while eyeballing his prints, which are in their early stages. It is Nassimbeni’s third time in the workshop and he is raring to go.

The artist is working on two parallel bodies of prints – three large, six small. “As an architect”, he says, “I am interested in the printmaking process for its similarities and its differences to processes used in architecture. For designing a building in architecture the drafting process is intensive from beginning to end. Producing a print of a selection of buildings follows a similarly layered process, together with concerns around line, tone, methods for bringing areas forward and pushing parts back.”

Nassimbeni begins by speaking about the larger prints, pictured – in progress – below:

These prints are an abstract depiction of a recent journey that the artist took through Hillbrow. He traversed the area by foot, specifically documenting buildings that were built in the 1970s and 1980s on his iPhone.

Back in the studio, Nassimbeni traced his photographs directly from his phone, drafting the structures in an architecturally precise manner. 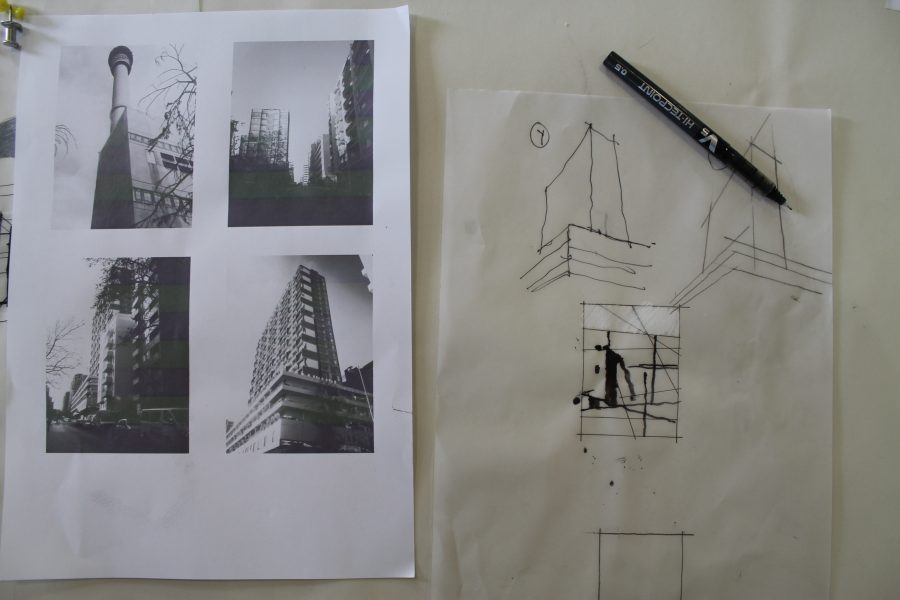 After that, Nassimbeni scanned the tracings onto his computer and began a digital layering process, which he explains below:

“When tracing the buildings, I drew clean lines to reference the pristine state of these structures and the standards of living in the area in the past. Once scanned into Photoshop, these carefully drafted lines serve as the first layer of my print. I then re-traced the same buildings in free-hand, scanned it in and digitally magnified the lines so they became thick, rough and grainy. After that, I layered the thick lines onto the original crisp ones. This second layer of line is referencing the Hillbrow we see today.”

The artist’s quality of line carries metaphorical meaning relating to the effects of time on a densely populated area. His line work operates on two levels – geometric and socio-economic.

Nassimbeni: “I want to explore the physical dimensions of Hillbrow as it once was in relation to how it is today. The demographic has changed considerably over a short period of time along with its state of wealth. I targeted buildings that were brand new in the late twentieth century but have become dilapidated.”

Nassimbeni currently lives in Johannesburg, but was born and raised in Cape Town where he developed a fascination with the realities of South Africa’s narrative of social change as it is reflected in dilapidated architectures and geographical spaces.

Of late, he has homed in on Johannesburg in his art. Nassimbeni takes as his visual starting point that the city grew from a small triangular chunk of land called “uitvalgrond”, meaning “surplus ground”. This was land deemed useless for farming and was sectioned off to build a city, which expanded considerably from 1886 when gold was discovered.

Before considering this context in his current prints, Nassimbeni made a sculpture, titled Josie, which is currently on display at Arts on Main.

For both the sculpture and the prints, processes of tracing, scanning and digitally enlarging lines were undertaken. For the artist, this complex approach to line is necessary in order to give an honest and visceral portrayal of an area like Hillbrow.

Nassimbeni’s current prints are part of a wider project of his, called Falling in… As implied in the title, the series is a visualisation of the artist’s attempt to orientate himself in a new city, “freeing falling”, as it were, into its fraught but fascinating dynamics.

To read more about the project, please click: http://www.designindaba.com/articles/creative-work/lorenzo-nassimbenis-drawings-capture-essence-cities

The process: Aquatinting the larger plates

For making the prints, the printing team work across a number of plates.

Then the plate goes in an aquatint box where it is layered in rosin. Following this, printer Kim-Lee Loggenberg burns the rosin onto the plate before putting it in acid.

Later on, Kim-Lee degreases the plate:

Nassimbeni’s parallel project is a series of six very small (10 x 7.5cm) prints in which he pays homage to the printing process itself, specifically in relation to the larger prints. He has diligently documented the process with his phone.

Nassimbeni reiterates that these mini plates are “process-driven, ex-ray-lake studies that map the process of the bigger works.”

Nassimbeni: “As I’ve never done sugar lift before, I am paying homage to the technique by documenting each stage of the process and using my photographs as context for more drawing. I guess you could call these conceptual sketches. My approach is somewhat architectural insofar as I am doing concept sketches of buildings, but with the final outcome being a print rather than a physical structure”.

Here is a sneak peek one of the six proofs:

As always in the workshop, it has been an overall collaborative effort. After each proofing, Nassimbeni discusses methods for activating areas and shapes by bringing parts forward and making particular line correlations recede into the background.

The team gather round to celebrate the final proofs for two of the large prints:

To read more about Lorenzo Nassimbeni and to see more examples of his work, please refer to our profiling page: http://davidkrutprojects.com/artists/lorenzo-nassimbeni