Permanent Culture, Stephen Hobbs’ first solo exhibition in Cape Town since 2009, opened at David Krut Projects in the Montebello Design Centre in Newlands on 20 February 2015 and will run until 25 April 2015.

Permanent Culture represents an elaborate multi-media revelry in the optical and psychological effects of camouflage and the historical role the arts have played in creating deception in the battlefield. Equally, the exhibition is an artistic analysis of the isolated nature of the gallery and suburban surrounds relative to the socio-political transformation of the Cape in the past 400 years. For more information about the exhibition click here 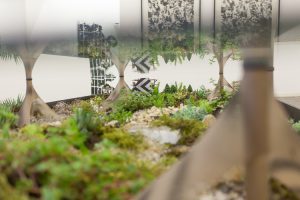 © Photographs below taken by Stephen Hobbs: