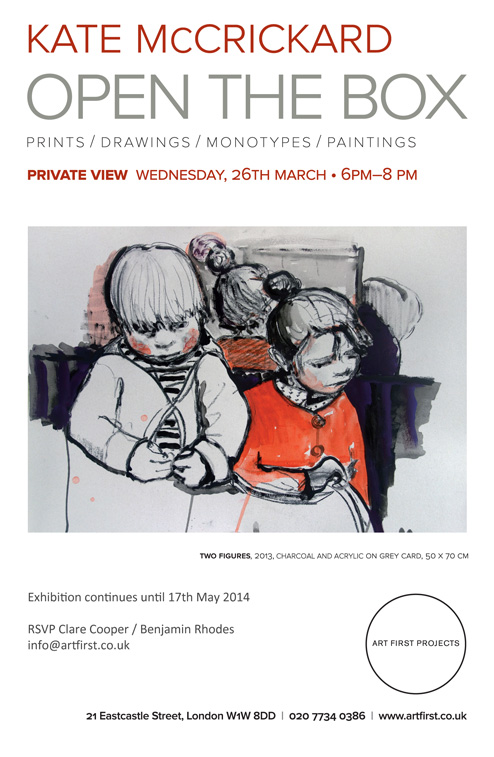 Open the Box offers an engaging body of work in which family life, with its focus on the creative antics of young children, has become the principal subject. Humour abounds in the rich, spontaneously worked surfaces and in the speedy line of drawings, monotypes and etchings, where the artist’s observant eye follows the constant activity of her small subjects. She captures their winning, un-selfconscious expressions in a series of lively, intense vignettes. The secret spaces that young children are drawn to: dens, playhouses, tunnels under the sheets, the space behind the couch, inform the compositions. These claustrophobic places that we peep into and that they peep out of are the starting point for many of the works in Open the Box.

Figurative images with no predetermined narrative are wrested from the close domestic arena. They are drawn from every day life and snatched from covert viewing points. The child’s body is also drawn as an expressive solitary figure performing activities in a series of offset drawings – old themes – dancing, drawing, pulling a thorn from a foot, licking an oversize spoon. Peripheral figures from this intimate space hover: the auntie, papa, grandmère and the family cat. A baby appears creating a new, private space.

Each medium is chosen for its appropriateness to the image: soft ground etchings look to the soft graphite line of drawing; quick drypoint prints follow the swift thoughts and compositions of the sketch book. The monotype leads to and bridges the gap between drawing and painting. Print is evidently at the centre of McCrickard’s production:

“All the masters that I admire in the history of art made prints as more than just an addendum to their painting,” she says. If the sometimes old-fashioned clothing and haircuts of the children initially invite comparison with the etchings of Mary Cassatt, further investigation reveals that McCrickard’s work is anything but conventional. She concedes that part of Paris’s artistic legacy has seeped into her work.

“As soon as you represent figures in interiors it is inevitable that French 19th Century paintings of children at home come to mind. The child as subject was not a deliberate choice, but I realised it wasn’t twee to depict kids in domestic settings through looking at those who had done it before to great effect.”

A fin de siècle element is present not only in McCrickard’s themes but in the abundantly detailed compositions that allow her to explore pattern, colour and mark-making in the manner of Vuillard and Matisse. French motifs are clearly visible, for example, in the series of prints she calls “postcard monotypes”. To a British audience Joan Eardley’s tough but memorable portrayals of poor children from the Gorbals in Glasgow are just as much a part of the tradition McCrickard refers to.

The paintings have more distilled qualities, given their slower medium. Colour abandons the restrained palette and the magical play of light and dark in the works on paper, bursting into bright greens, blues, cadmium reds, purples. Applied with loose brushwork across the expanded scale of the canvas, Lollipop, Red Couch and Papa, for example, take us into a new world of bright colour; a direct reflection perhaps, of the immediacy of the childrens’ own experience.

For more information about the exhibition please visit Art First.