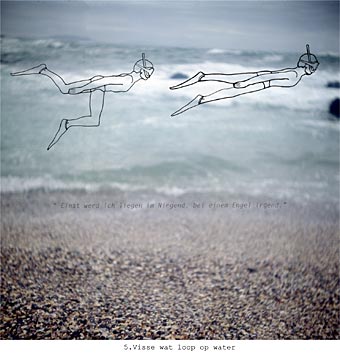 The colour of the sea when driving back home at the end of a day in February is undefined. It needs a new word but there is no word for a colour like that at about eight o’clock on a warm summer’s evening. Perhaps it is the colour of whale songs or the colour of fish memories or the colour of  a million tides collected over centuries. Imagine the voices rising and sinking to the hues of Auro Metal Saurus (nice name for a rock band), Munsell, Cool black, International Klein Blue. The colour is saturated with all the wonder of all the creatures living and dead in its depths and on its surface: crabs, amphipods, fanworms, Sargassum fish, ribbon weed…

Months later the dictionary is stained. A one legged man floats towards the rocks, the shark disappears, still hungry.

This text was produced by Botha as a contribution to Cross-Currents, a group exhibition in which her work is included, showing at David Krut Projects Cape Town, 31 July – 25 August 2012. Cross-Currents presents a selection of works that draw on ideas of the sea, literally – as in, how do we relate to the sea and how have we related to it over time – and metaphorically – what does the sea stand for and how do we extrapolate the psychological implications of the idioms that we’ve developed around the ocean.