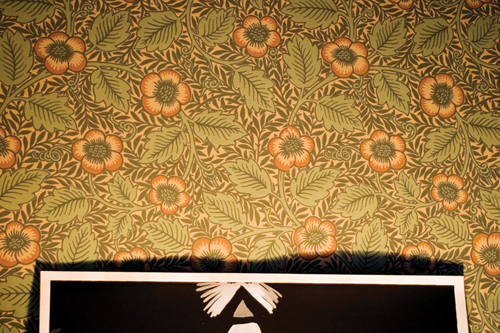 Suzanne McClelland’s newest project isolates language that exists in situations of conflict, both internal and external, intimate and explosive, and presents an installation of messages in a range of materials. Paper forms the bulk of the exhibition…printed matter, photographs and drawings. Video and painting are utilized in collaborative works.

As someone who grew up with pervasive media images of the combat during the Vietnam War, McClelland is conscious of the detachment between American life and the ways that conflicts taking place around the world are revealed and mediated. Forms used to describe internal division, schisms and separation resonate throughout this exhibition.

This current installation explores interior space and found language drawing on a previous work. In her painted installation right, exhibited at the Whitney Museum Phillip Morris (now Altria) in 1992, the work was made out of building materials and house paint. It was a deconstruction of a room and of the word right. In this current exhibition the weight of the room is dissolved and distilled to a bulletin board and then used as a way of creating a structure for reading.

The poet, George Garrett provided a collection of works, Found Poems from a Lost Time for the artist to respond to. These poems are anecdotes and fragments lifted from letters written by two men on either side of the American civil war: Toomer Porter, an Episcopal minister and chaplain in the Confederate army, and Colonel Oliver Hazard Palmer, a lawyer who became the commanding officer of the 108th New York volunteers. Garrett writes in the first person, rereading conflict with the distance of time.

McClelland takes that distance further, rewrites the poems of the letters, producing 13 visual portfolios drawn directly from each of the 12 poems plus a title portfolio. She isolates language from the 12 poems to assemble the portfolios. Framing with the camera is used as another device that warily records the material. Words reverberate with poignancy: perpetuate and maintain, short rations, Advance, shot away, doomed, left behind, sermon, vain regrets, mistake, shed. Cropping and cutting-out adds a sense of removal and obfuscation, illegibility. Cast light falls across forms, picking out the fragility of the paper edges. A range of black surfaces form the ground, where letters rise up in white paint like tombstones, or fade into the darkness, drawn in delicate crayon. The language of the poems is claustrophobic and intimate despite the violent subject, and McClelland captures this by returning to a silent southeastern corner of a nineteenth century house. All the photographs were shot in this corner tracking the sunlight as it moves across throughout the day.

The exhibition includes two video works driven by sound. TEAR, made with Garrett Bradley, splices together real shots of South African elephants together with soft shots of the cartoon elephants, Dumbo and his mother. RELOAD, made with Kari Gray, shows us the vocabulary of a five year old boy, who, when asked a question about tools for healing, digresses into a list of weapons fit for a well-stocked arsenal, revealing the way abstract thinking is part of early childhood, and shows up in the relationship between speech and action. Included in this body of work is a velvet painting, SOFT PARTITION, made with Drew Vogelman; MAINTAIN/PERPETUATE, a silkscreen on velour; and a pair of etchings STRAY/STAY made in South Africa. A small edition book published by David Krut Projects and designed by Laura Gencarella and Kate McCrickard accompanies the exhibition.