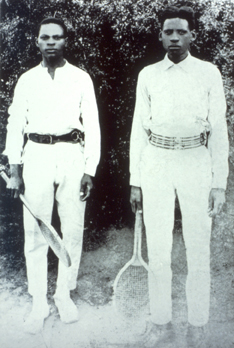 Santu Mofokeng is one of South Africa’s leading photographers. He began his career as a street photographer in Soweto and through the 80s he worked on the documentary coverage of the anti-Apartheid struggle. At the end of the decade, Mofokeng decided to leave the field of overtly political photojournalism and to engage in the representation of everyday-life in the South African township. With subjects as visually diverse as religious rituals, images of black identities or desolate landscapes, Mofokeng constantly subverts the comfort zones of racial and cultural memory, questions the politics of representation and the objectifying gaze of the photographer.

The Black Photo Album/Look At Me: 1890-1950 is a series of digitally reworked 19th century, colonial portraits of Black South African families. “These are images that urban black working and middle-class families had commissioned, requested or tacitly sanctioned. They have been left behind by dead relatives, where they sometimes hang on obscure parlour walls in the townships. In some families they are coveted as treasures, displacing totems in discursive narratives about identity, lineage and personality. (…) When we look at them we believe them, for they tell us a little about how these people imagined themselves. We see these images in the terms determined by the subjects themselves, for they have made them their own.” (Santu Mofokeng)

The ongoing body of work, Chasing Shadows, explores the relationships between landscape, memory and religion. The images on view were made on Good Friday 1996 and show a religious ritual performed at the Motouleng cave portal by affiliates of the Zionist Apostolic faith. As Mofokeng writes, “many people who come here to worship believe that the spirits of ancestors repose in the deep belly of this cave. (…) This project steered me to places where reality blended in freely with unreality. While the images record the rituals, fetishes and settings, I am not certain the film captured the essence of the consciousness I saw displayed. Perhaps, I was looking for something that refuses to be photographed. Perhaps I was only chasing shadows.” (Santu Mofokeng)

David Krut Projects presented the first US solo exhibition of Santu Mofokeng in celebration of the 10th anniversary of South African democracy.