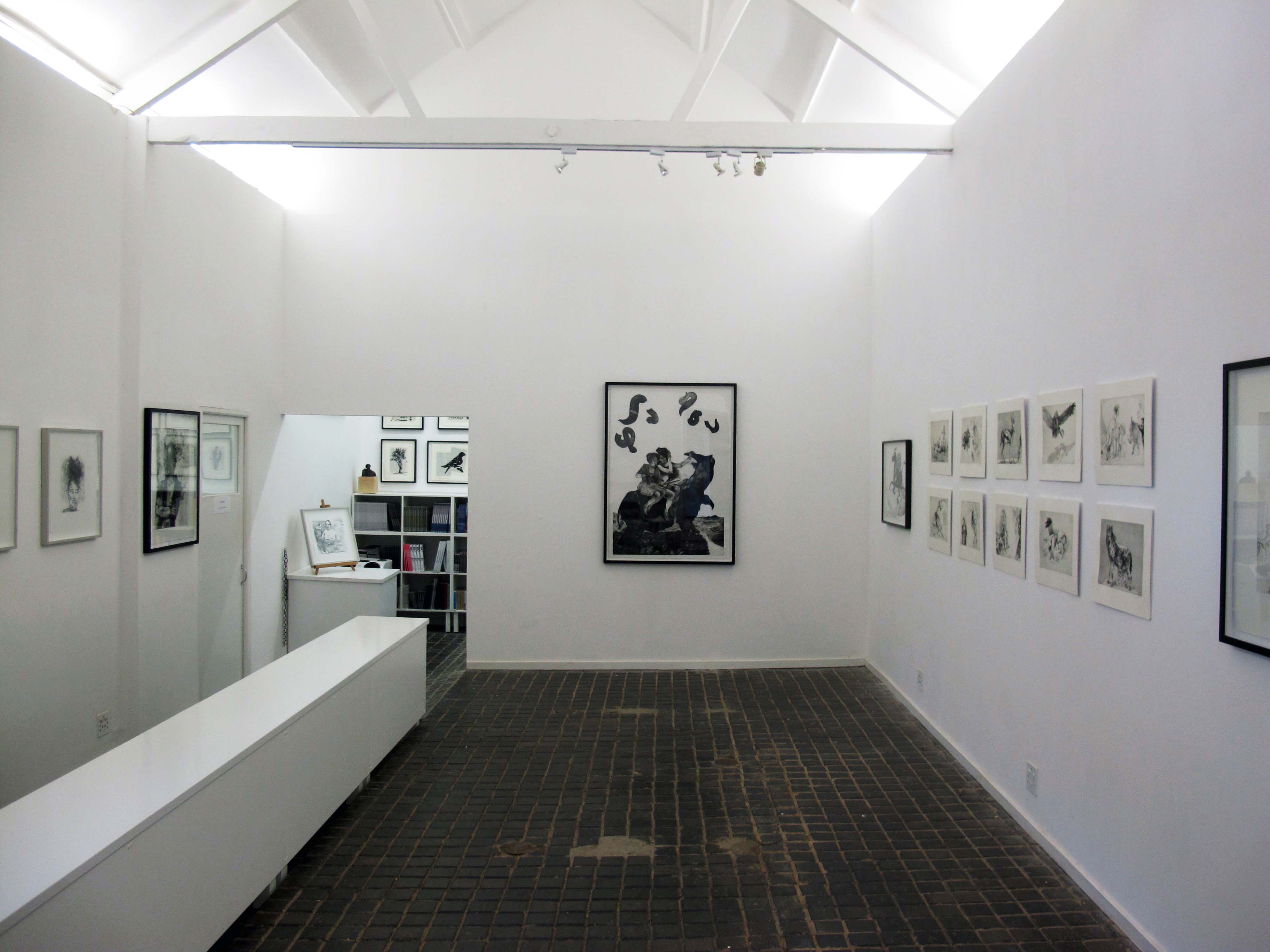 David Krut Projects is pleased to present an exhibition of prints by extraordinary printmaker, Diane Victor – the first solo show of her work in Cape Town since 2008. The exhibition comprises works created between 2008 and 2013, as well as a very early work from 1986. The keen selection brings viewers up to date with the artist’s production, as well as reiterating her mastery of the medium that has long served her unrelenting critical interrogation of everyday atrocities and the abuse of power.

Victor’s enduring affair with printmaking began in the mid-1980s at the University of the Witwatersrand where she read for her fine art degree. Although her first love was drawing, the university required students to pick one of three specialisations, the options being painting, sculpture and printmaking, with the latter providing the most potential for her rigorous and detailed line work.[1] The mode of production – gouging drypoint needles, biting acid – mimics her acerbic treatment of difficult subject matter. The use of shaped plates allows Victor to suspend images in the centre of a composition, calling them out and leaving them to float unmoored in the whiteness of the page. Sophisticated blind embossing allows for subtle but persistent detail, like whispered mitigating information. Watercolour monotype provides an equivalent in printmaking of smoke and ash in drawing, able to communicate fragility, transience and loss. When her subject is heavy and visceral, her prints are dense, with gothic overtures and impressive tonal range. For loftier, hypothetical explorations Victor works in delicate drypoint lines, with all excess ink wiped from the plate before printing.

For Victor, making art ‘provides a way of working through troublesome images that lodge themselves persistently in her memory.’ The process is cathartic. The visual equivalent of psychoanalytic ‘talking cure’, Victor draws her subject matter from far and wide, pulling information from the media and personal encounters, transforming them into rich and heavily populated compositions, full-blown narratives employing her grotesque and characteristic iconography. In this exhibition, one sees Victor still pre-occupied with ‘the big “catholic” sins – greed, lust, envy and excess.’[2] Victor responds to instances of these in politics, tackling corruption, fraud and extortion on a grand scale within dominant social institutions. Simultaneously, she exposes the perpetuation of these crimes in everyday lives. As much as her technique is relevant to her subject matter, the pressure of the press and the bleeding of the ink into paper are also metaphorical of the persistence of injustice and Victor’s need to process and express her responses through visual language.

Whether her politics and platforms are public or personal, her imagery is the stuff of nightmares. However, the seriousness of her subject matter is kept in check by her sense of humour, revealed through parody, sharp satire and ironic self-effacement – a belief that ‘if you take yourself too seriously as an artist you are in very big trouble.’[3]

To view installation images of the exhibition click here.

Diane Victor and DKW first collaborated in early 2008 on three large etchings – Bluebeard’s Wife, Lot’s Wife and After Eden. In 2009, Victor originated and editioned a series of drypoints at DKW, called Birth of a Nation. These works were exhibited at David Krut Projects, New York, as well as a selection featuring at an exhibition at Grinnell College, Iowa in early 2011.

Victor was the subject of TAXI-013 (2008) from the David Krut Publishing TAXI Art Book series of monographs. This publication was followed in January 2012 by Burning the Candle at Both Ends, published to co-incide with Victor’s two-part exhibition, Ashes to Ashes and Smoke to Dust, which was held in collaboration by David Krut Projects and the University of Johannesburg Art Gallery.

Victor has completed two residencies in the United States with David Krut Projects, New York. During the first residency in 2011 Victor created a series of watercolour monotypes in collaboration with master printer Phil Sanders at the Robert Blackburn Printmaking Workshop (RBPW). She returned to America in 2012, during which time DKW facilitated further collaboration between Victor and Johee Kim at RBPW. During this period Victor created the works Let Sleeping Crocs Lie, The Grand Magician, The Sower, Johnny and the Bunny Boy, One Night, and Ash which were first exhibited by David Krut Projects at the 2012 Johannesburg Art Fair, and were later editioned by Jillian Ross and Mlungisi Kongisa from DKW.

In late 2012 and early 2013 Victor completed a residency in China. The work created in China includes the large etching, The Rhino Who Looks at the Sky. Following David Krut Projects’ participation in Multiplied 2013, the suite of Birth of a Nation was purchased by the Victoria and Albert Museum, London.

[2] Bronwyn Law-Viljoen in ‘The Shadow Arrives First’, p.94 of Burning the Candle at Both Ends. David Krut Publishing, 2012.