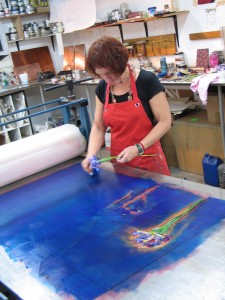 Floating and Falling, an exhibition of monotypes and mixed-media oil paintings, is Bronwen Findlay’s first solo show in Johannesburg since her major painting exhibition at the Standard Bank Gallery in 2006 and a show of prints at Artist Proof Studio in 2007.

Floating and Falling refers to the elements that tumble every which way, unencumbered by gravity or perspective, in Findlay’s paintings. Findlay has no qualms about labels such as “sentimental” or “kitsch” and happily incorporates doilies, flowers, flowered prints and everyday things into her work. This recycling of found objects enables Findlay to posit something new about the mundane and to give old things new life.

Findlay has always reveled in rich shades and bright, contrasting colours, but the recent addition of metallic sheens lends a new note to her work. While areas of golden dots and copper hues are reminiscent of Gustav Klimt, Findlay compares her process, in its intensity and repetition, to lace-making or other, traditionally feminine, forms of domestic craft.

The vibrancy in Findlay’s work comes not only from the rich hues on canvas and paper, but also from her frequent breaking of the strict confines of the canvas. In Curtain, for example, Findlay glues a tattered curtain to the canvas and then lays down a series of bright colours, livening up the bleached roses of yesteryear in golden yellows and flushed pinks.

Findlay’s primary interest lies in the materiality of paint, so that subject matter is often subordinated to the viscous liquid, becoming embedded in it, often destroyed by it. This is nowhere more clear than in Belongings, where teaspoons and other objects are lodged in the thick pink surface of paint.

In the monotypes created at DKW for this exhibition, Findlay has translated this richness of texture onto paper, using ink like paint for some prints and fixing objects to the surface of others. Jillian Ross, Findlay’s collaborator at DKW, ran many of the monotypes through the press three or four times to give the works their density, sometimes attaching small objects to the paper for the last run.

Bronwen brought a basket of objects into the studio for inspiration and experimentation. In one print, a piece of thread creates a swirling pattern, and in another the squashed petals and stem of a flower lend texture to the surface. She kept applying the ink very heavily to the bed of the press, which meant that I was using a variety of pressures for printing. It also meant that we were able to get a range of marks. Sometimes it looked as though we had applied a crayon to the print and at other times, when we printed with less pressure, the texture of the paper shone through.

Findlay has made unique monotypes and prints at DKW before (her first major exhibition of prints, A Blanket Story, comprised work created in the workshop in 2005), but in Floating and Falling, she demonstrates a new confidence in the medium. Working in layers of colour – blues, fuschias, greens, metallic gold and silver – and using a variety of inking techniques, from heavy painting to application with various rollers, Findlay has sought not to mimic her canvases but to reinterpret them.

Bronwen Findlay’s Floating and Falling opens at noon on Saturday 24 May 2008 at David Krut Projects in Johannesburg.