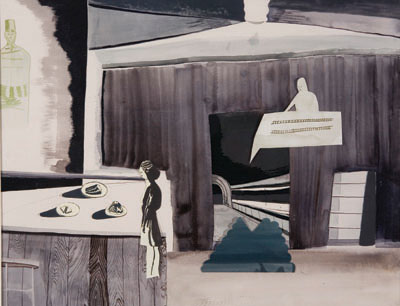 The world I paint has no future. It is a self-contained place without apparent movement. Yet on closer scrutiny, movement of a sort can be perceived. A receding pull from the past, to the past. This pull stems from the exploration of the old roads, an attempt to discover among these paths that which has been forgotten or overlooked. Strangely, when discovered, the relics that inspire my world carry with them qualities that resonate with the uncertainty we usually associate with the future; their unfamiliarity stems from their connection with a now distant world.

David Krut Projects is proud to announce a solo exhibition of unique watercolours and prints by Andrzej Nowicki. Nowicki is a recent Masters graduate from the Michaelis School of Fine Arts (University of Cape Town) and a recipient of the Irma Stern Scholarship from 2005 to 2007. He relocates this year as a practising artist to New York. Born in Poland, he moved to South Africa with his family at the age of eight. Although he has lived in South Africa for nearly twenty years, it is intriguing how closely comparable his work is, in palette and subject matter, to Post Socialist, East German painting. Nowicki makes the reminiscent sepia-tinged landscapes and strangely detached figures his own, by weaving them into nostalgic and biographical narratives. The result is both alienating and beautiful.The exhibition will include watercolours with a new series of prints recently created in collaboration with the printmakers at David Krut Print Workshop.