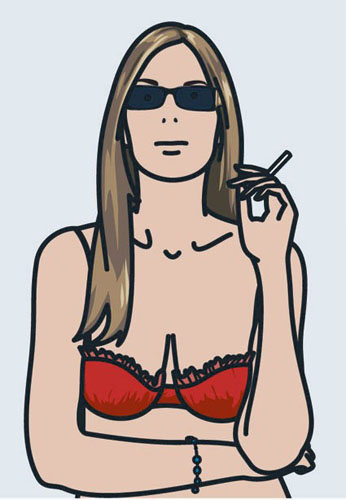 In the first exhibition on British artist Julian Opie in South Africa, David Krut Projects will show several portraits from three of Opie’s most recent series of prints: ‘Ruth Smoking’, ‘Ruth with Cigarette’ and ‘This is Shahnoza’. These large, striking works show Opie’s clarity of line and colour – his use of primary colours and of bold black strokes – to startling effect. They also demonstrate Opie’s facility with different surfaces so that images produced as Lambda prints leap from the frame and screenprints on paper have all the desired tactility of their medium.

Opie’s portraits have occupied a central place in his work since the late nineties, appearing in a variety of formats and media, but always in the strongly minimalist form that has made his works iconic. And while his markmaking has been honed to an instantly recognisable style and technology has allowed easy dissemination of his images, the portraits do not lose their uncanny intimacy and their strong connection to his individual sitters.

Opie has remarked that he “[tries] to make objects that are both a drawing of some specific object but also a symbol. The two things are kind of meshed together. If they became more symbolic there would be no reason for doing more than one, and they would perhaps lose a sense of relationship to the experienced world.” This idea of the symbolic value of an image is surprisingly old-fashioned for an artist who is sometimes described as the most prominent heir to the Pop artists of the sixties. That an image should be, at the same time, a representation of an object or person in the real world and a symbol – perhaps of a set of values or of a particular aesthetic ideal – has the paradoxical effect of cementing Opie’s relationship to Pop art and distinguishing him from its many emulators.
– Bronwyn Law-Viljoen, Managing Editor, David Krut Publishing