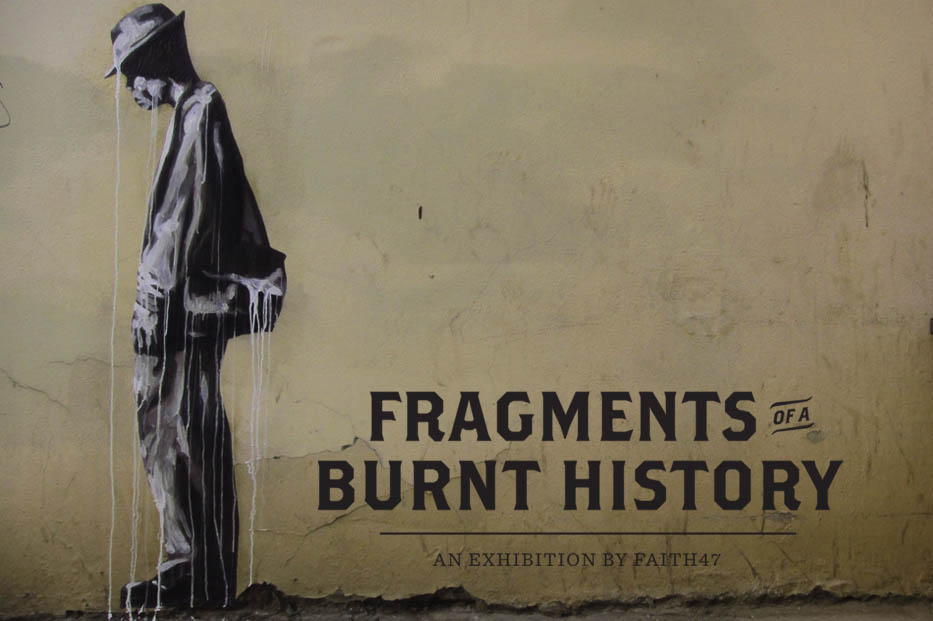 Faith47’s Fragments of a Burnt History, showing at David Krut Projects Parkwood from 8 November 2012 to mid-January 2013, is comprised of an installation of found objects and artwork created in the artist’s studio, as well as a new series of monotypes produced in collaboration with the David Krut Print Workshop. Faith47, based in Cape Town, is a recognisedstreet artistwhose work can be found in cities all over the world. She has an established international gallery career, with exhibitions in Europe, America and Australia, but Fragments of a Burnt History is her first solo exhibition in South Africa, indicating a culture of cross-over from street to studio that is already well underway abroad.

The street and the studio are essentially two very different environments. In moving a practice directly from street to studio, what is lost is the context that inspired its creation in the first place and formed an integral part of its existence – the reality of the inner-city, the work of other artists and street poets, the humdrum of traffic, rubble, decay and, perhaps most importantly, traces of the people that interact with the city and the work. While her roots lie in street art and her inspiration in urban environments, in her on-going and dynamic transitional process from street to studio, Faith47 has retained the heart of her street work. Although necessarily accessed in altogether different contexts, the grit of the inner-city has been incorporated into the studio work.

The body of work presented in this exhibition is, appropriately, drawn from the artist’s experience of her own country, particularly the city of Johannesburg. Although the work is not a direct interpretation of the city, her experience is of Johannesburg as a representative African city, the streets full of the energy of transformation and endless possibility, but also the evidence of the harsh realities of day to day life. In her street painting in Johannesburg over the years, Faith47 has concentrated on the process of making the work, and the spaces she can explore in order to find appropriate locations for her paintings. She describes having painted for hours ‘in empty buildings that felt like spiritual experiences, exploring holy chambers of neglected architecture…finding something so beautiful in what society disregards, and bringing to life that which people usually throw away or ignore.’* As a result of this approach, she has accumulated masses of reference material – phrases scrawled on the walls of abandoned buildings, illustrations under bridges, political slogans on structures in city centres and on roadsides.

These textures of the streets are incorporated into her studio work, which becomes a combination of her signature graphic style and marks left behind by people who were in those locations before her. Faith47 is deeply connected to these environments through her interactions with them – in her street work she is a commentator who, alongside others, draws attention to alternate realities on the streets. In her studio work she acts as a medium, bringing the voices of those commentators into a different context, for consumption by a different audience. She has also incorporated fragments of signage found on the streets into the work on this show. Many of them are words and symbols that a local of any South African city would recognise immediately – from warnings on residential gates, to pasted advertisements for herbals doctors and flyers for low-interest cash loans. In her appropriation of them alongside her own visual images, she unravels and complicates their meanings, delivering a real sense of the streets – ‘busy, busting, full of detail and signage and mismatched symbols and memories piled on top of each other.’

The installation of the exhibition adds to this sense of full-to-bursting bustle. One wall of the gallery is entirely filled with found wood, objects and artworks, closely packed together. The installation, although made up of many different pieces, appears as one work, jam-packed with complex detail. The chaos of the installation is at first overwhelming, much like busy city streets themselves, but it is by no means impenetrable. Once one has moved beyond the jolt of the initial commotion one is able to get lost in the details, finding overlapping stories and meanings in the juxtaposition of elements within the whole.

Her sensitivity to the environments through which she moves (and to which her gallery audience most often does not have access) allows her to present observations and critiques of the realities of existence on the streets without sensationalising the very real positions of the anonymous characters that emerge in her work. Fragments of a Burnt History presents many elements of living in South Africa thatcarry with them long lists of weighty connotations – of establishment, security, spirituality and the fragility of political and ideological devices of control, often disconnected from the people they are designed to govern – the people on the streets. The installation of work communicates the emotion that Faith47 experiences in the streets, which tell her ‘a real, hard and beautifully sad story.’ The nostalgic architecture of the city is present in the work, and the sense that the ‘history of the city is etched deep into its streets’ – the works are fragments of this history, containing signs of the dynamic transition that has been, at times, reeling and painful, but has also been honest, allowing itself to be offered up for comment and consumption. The voices of the people that occupy this symbolic South African city, incorporated into Faith47’s own voice, allow her work to function as a penetrative look into the psyche of the spaces that we communally inherit.

*All quotes taken from correspondence with the artist. 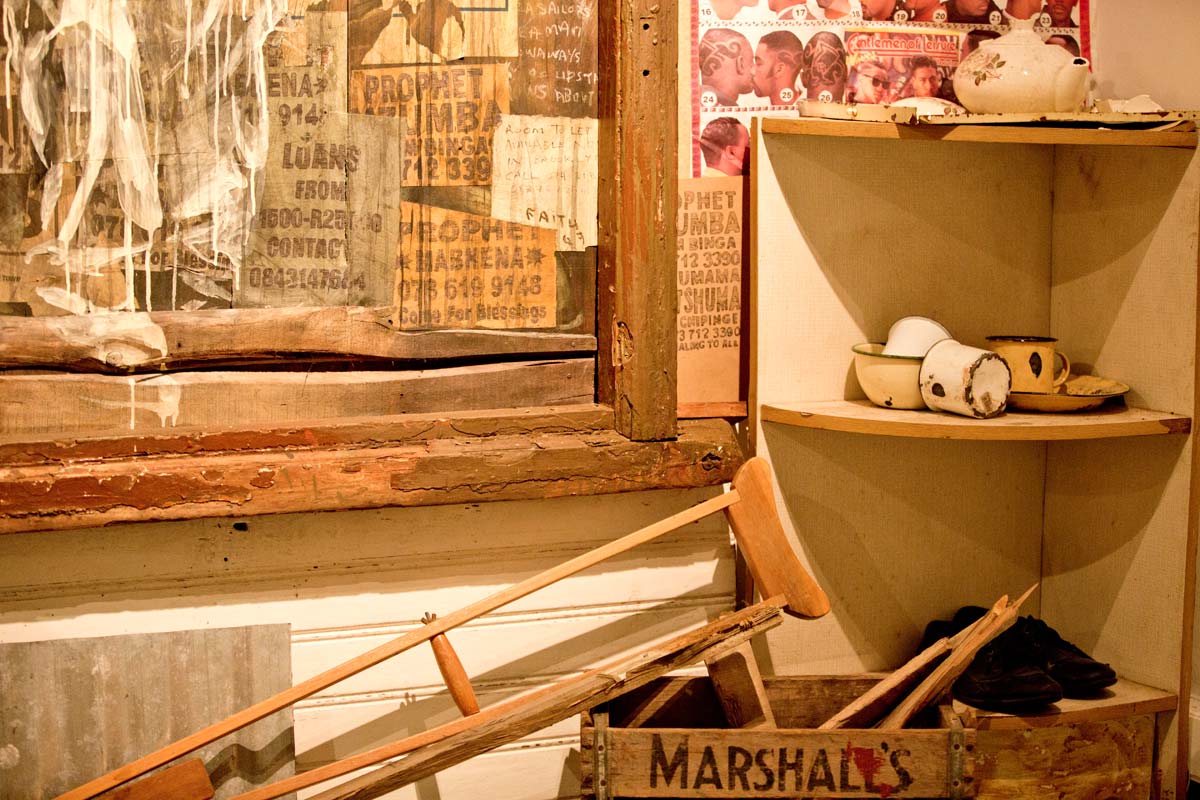 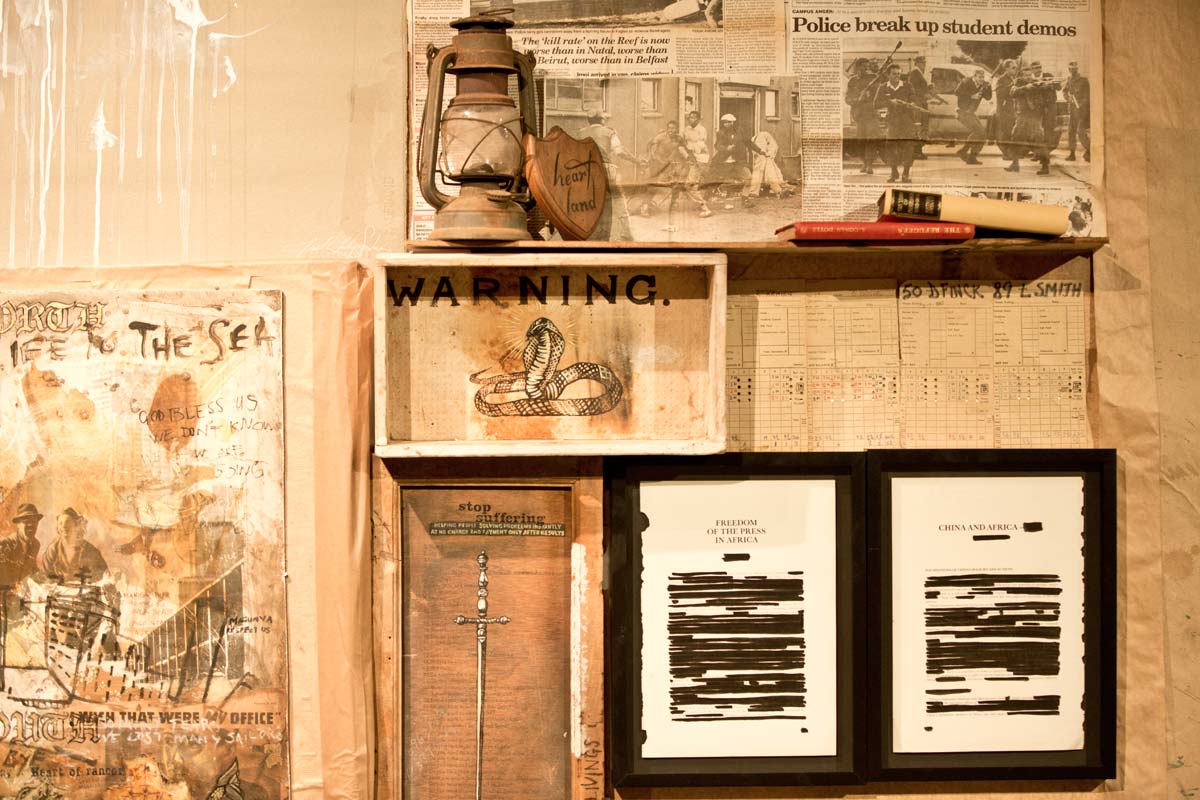 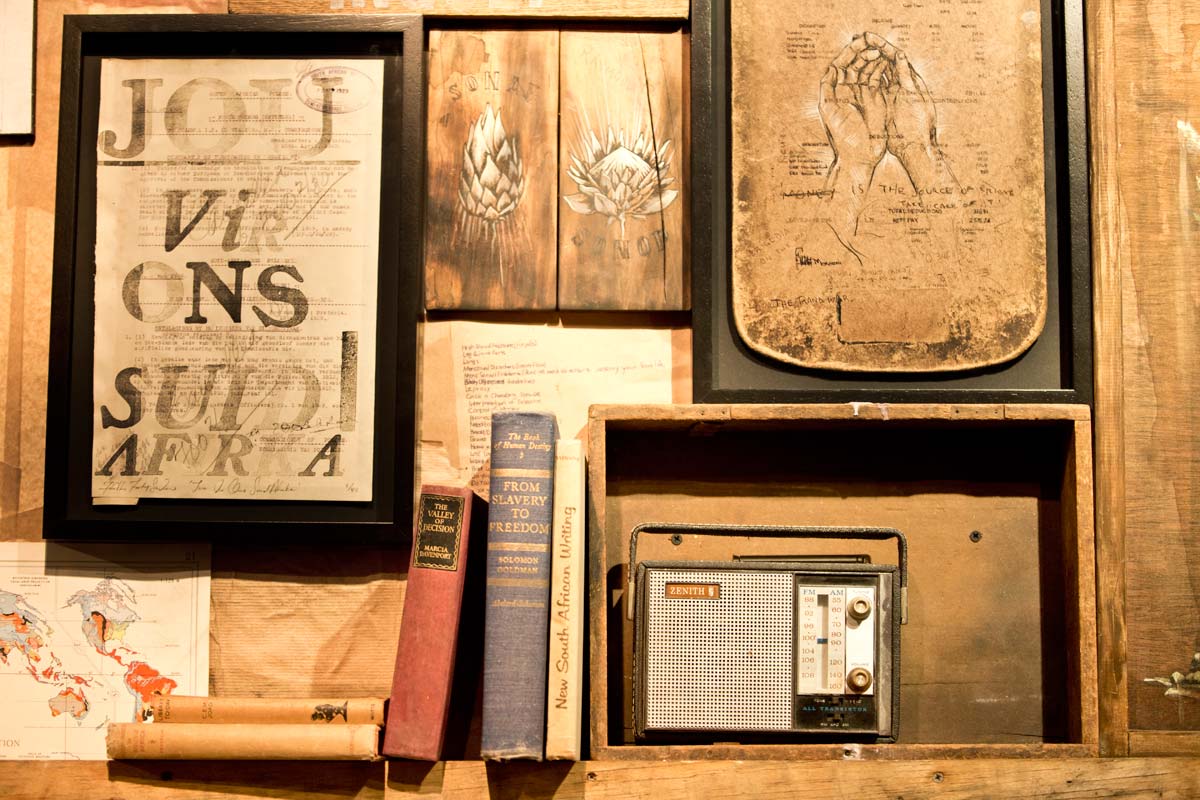 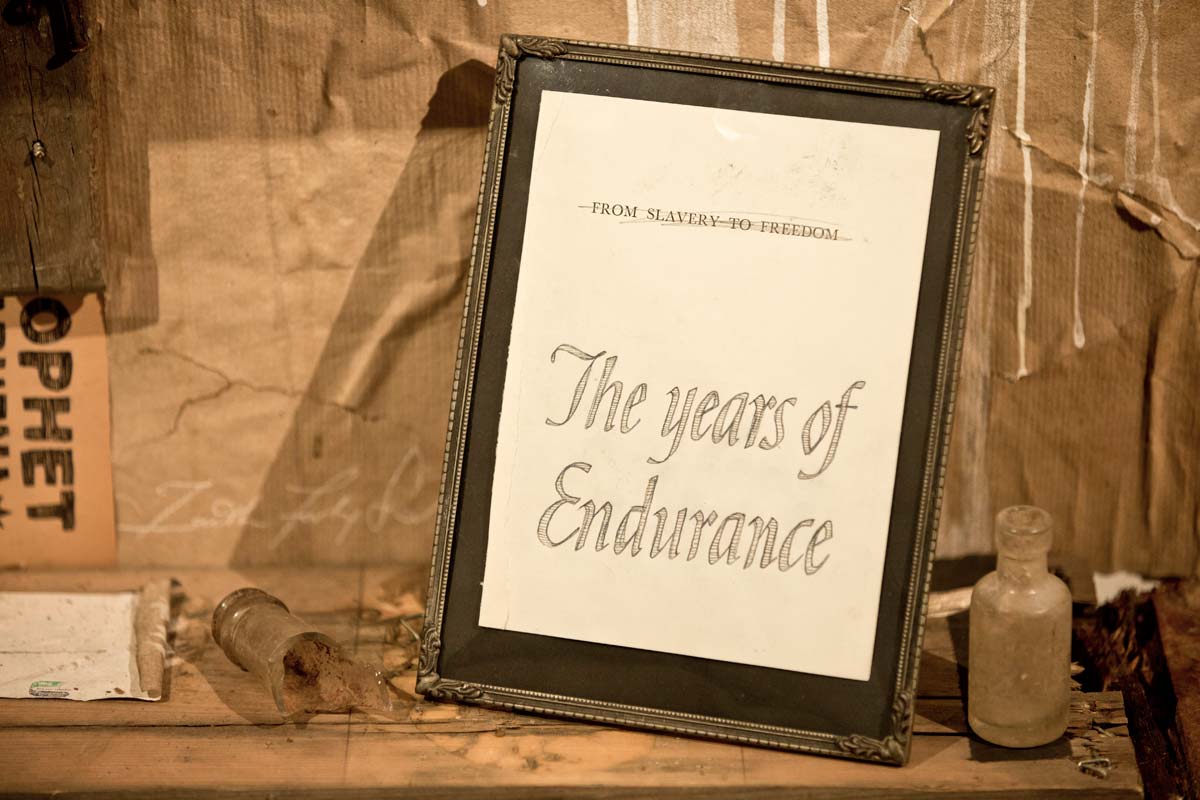 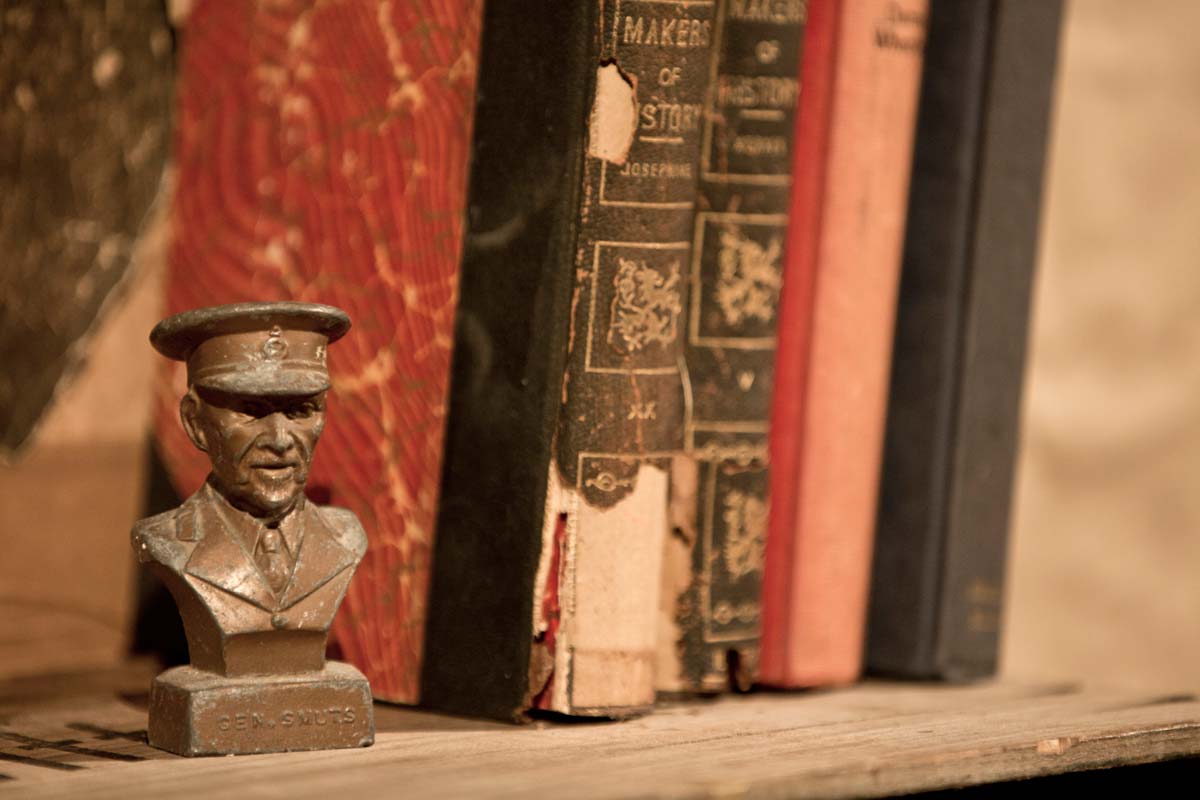 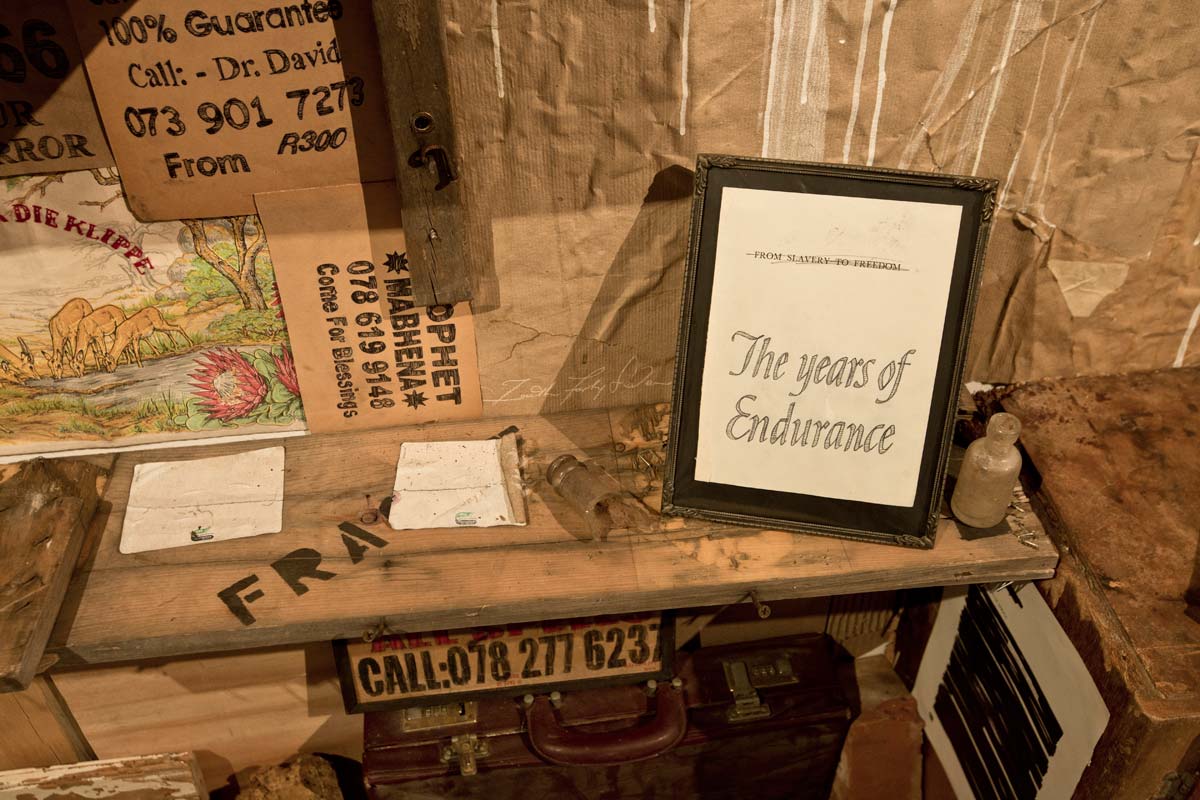 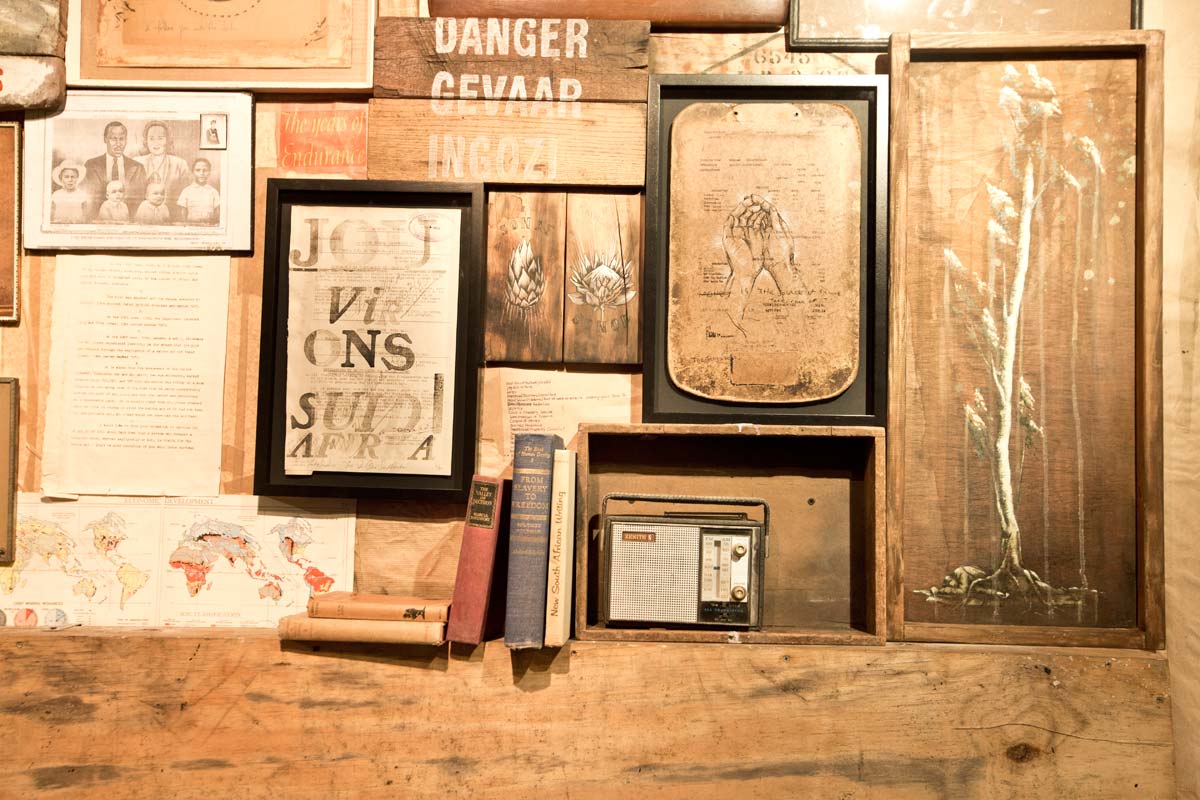 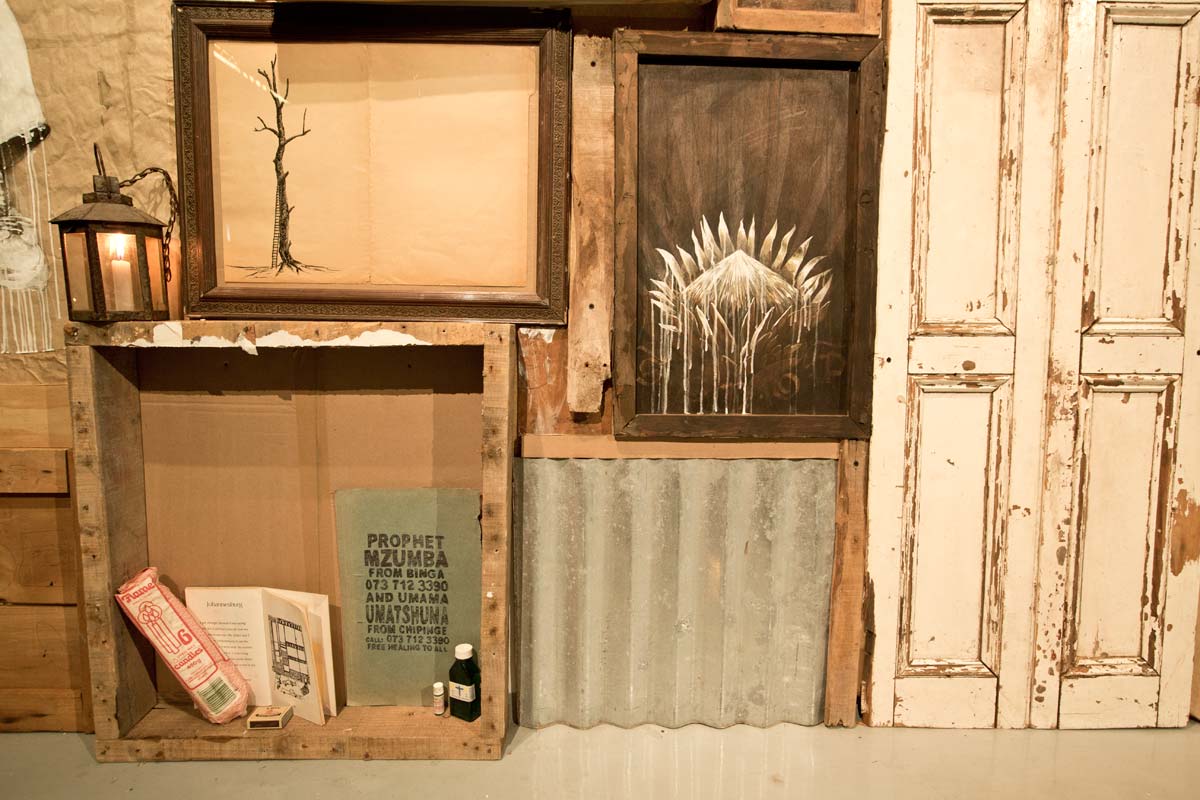