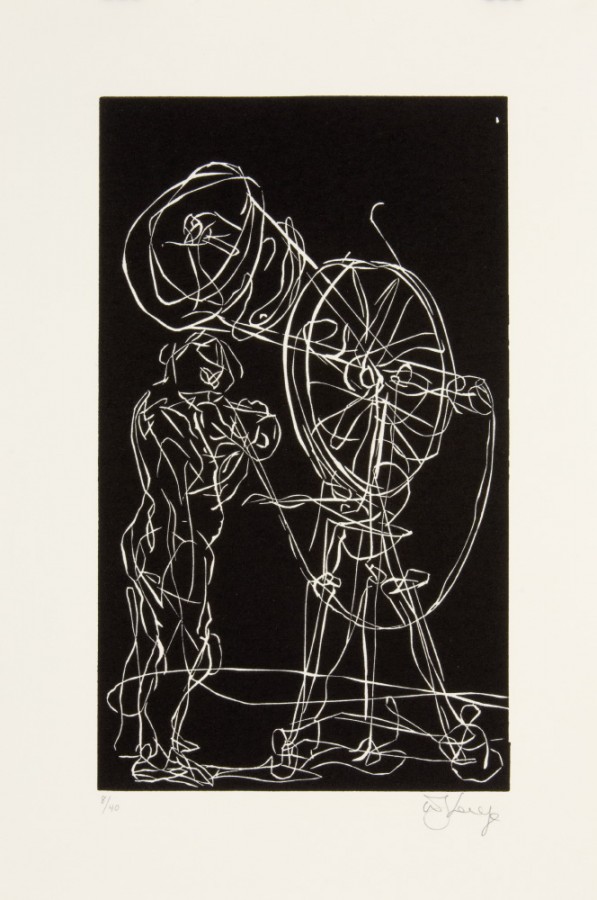 Solo for Bicycle is one of a small series of six linocuts – the others being Splash, Portrait, Rumours, Hadeda and Floral Dress – created at the David Krut Workshop in 2010. Despite the scarcity of linocuts in Kentridge’s oeuvre up until this point, one of the first prints he made in 1976 after finishing high school was a linocut: an image of his grandfather in a deck chair wearing a three-piece suit while on holiday in Muizenberg, just outside Cape Town. Although the extent of the facilities available to Kentridge at the time was limited to “lino, cartridge paper and the back of a spoon”, he has cited the image as one of the sources for the character, Soho Eckstein, who first appeared in Kentridge’s 1989 film, Johannesburg: 2nd Greatest City After Paris and is the main protagonist in the Drawings for Projection cycle of nine films made between 1989 and 2003.

Solo for Bicycle is based on a series of megaphone sculptures that Kentridge was creating in late 2010 for his interactive performance/installation called The Refusal of Time, which was developed in collaboration with Peter Galison, Physics Professor at Harvard University, and was presented at Documenta 13 in 2012. In The Refusal of Time, in which science meets art, our continually shifting grasp of the concept of time is interrogated. The project combines performance with pre-filmed projections, live sounds with pre-recorded sounds, performers, props, costumes, an opera singer, choir and incorporates the audience, who is encouraged to interact with different parts of the set.