Gary Schneider, Rose 1989 (2001) a photogravure with chine colle in an edition of 25 plus five artist’s proofs and two printer’s proofs. 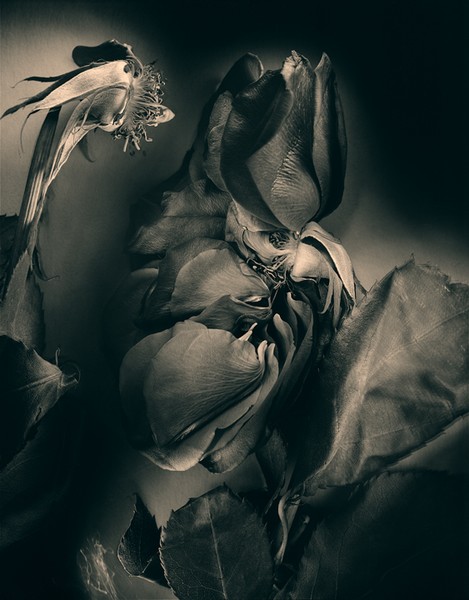 Schneider is apparently enjoying the effects achieved with ink rather that with silver emulsion. He instantly saw the potential for textural depth, as achieved in Rose, and turned to a pair of photos from his Genetic Self-Portrait series, showing his own eyes in intense close-up. Pupils contract and irises swim about – perhaps a bit too much for a gelatin silver print. Here the photogravure plate was printed over a transparent burnt-orange surface roll, which gives the irises a translucency that works extremely well with the inky anchoring of the gravure. The irises seem intensely trained on some impossible object, certainly not the viewer – there is more of a gaze between the living and the zombie roses in Rose 1989. These two photogravures are an auspicious beginning for what is evidently going to be a series of ambitious projects by Schneider in the medium. Price: $3,000. Both published by David Krut Fine Art, New York.