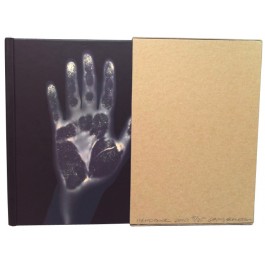 HandBook is a print-on-demand artist book. It is the culmination of seventeen years of Schneider’s commitment to making portraits of hands without the use of a camera. In this form, HandBook traces a unique thread that connects the literal hand of the subject and that of the artist to a book object produced via the apex of contemporary digital printing technologies. For Schneider— who in a former incarnation was known as a master of chemical darkroom printing—this adaptation of digital printing technologies earmarks a profound and telling shift in the contemporary arts and publishing arenas. This special limited-edition artist book is the culmination of one of the first collaborations between Aperture, a photographer (Schneider), and a print-on-demand press (Blurb).