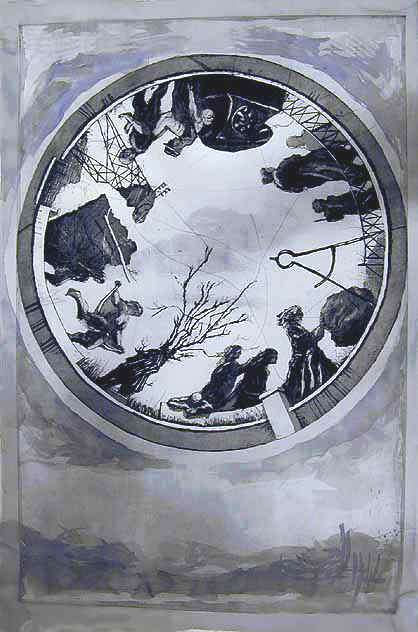 Kentridge: “In doing these prints, I was interested in the way in which projections can give large scale to images – becoming a kind of heir to the fresco tradition in the way that they cover a huge wall with an image. I was thinking about projections as a way of seeing the world, a contemporary and ephemeral vision equivalent to the view of the world encoded in fresco painting in past centuries. When I did a projection onto the ceiling of the city hall in Amsterdam in 1999, which was in fact a barrel vault and not a dome, I took as a starting point for the project the famous Goya frescoes in San Antonio de la Florida, Madrid. In this project I worked with figures moving around the ceiling, an endless procession. The figures were made from pieces of torn paper, in similar fashion to the leporello print, Portage. The images were projected on top of the Baroque painting of the ceiling. The two atlas processions – the large and small versions – both came out of this project, using maps as the ground onto which the figures were ‘projected’. In the smaller version, actual pages from an atlas were chine colled onto the paper; in the larger ones the map was reproduced large onto a polymer plate and printed in relief. The initial proofs, which had coloured aquatint to try approximate the colours of the maps, were a dismal failure, so the maps were printed in monochrome, with hand colouring in watercolour added later. The figures on the inside of the dome and those outside of the dome represent two different responses to thinking about the curvature of the horizon, which in the conventions of painting and photography we see as flattened, making anamorphic distortions of the world to fit it to a rectangular grid.”