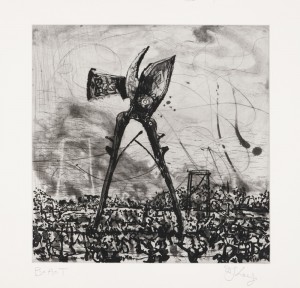 William Kentridge, probably the country’s best-known artist, last week spent a few days visiting vineyards in the Swartland and some obscure valleys and far up the West Coast in the Olifants River region. With him and me were winemaker Eben Sadie and L’Ormarins viticulturist Rosa Kruger. The purpose? To show William the old vineyards from which Eben has this year made (in tiny quantities) wines for a collection of six extraordinary wines he is planning on releasing next year.

One of the six will not, in fact, be a new label or from this larger area: the Stellenbosch chenin called Mrs Kirsten’s Old Vines that Sadie has already made a few vintages of. The others are mostly from vineyards that Rosa Kruger “discovered” – with splendid old bushvines, aged from 50 to a hundred-plus years. (I wrote about an earlier visit to some of these in a blog earlier this year, and more recently in an article for World of Fine Wine) [unfortunately this link no longer leads to the article]. Most are white wines: a chenin blended from three old vineyards on the Skurfberg, a mountain in the Olifants River region, a field-blend of red and white semillon from another Skurfberg vineyard, another but wider-ranging field blend from an even older and more remote vineyard in the extreme north of the Swartland lost amongst plantations of roobois tea and wheat, and a sweet wine from hanepoot planted on the edge of the same vineyard around 1900. (This is the vineyard I focus on in the Fine Wine article, which also tells the strange story of the rare red semillon grape). In the photo above: Eben, William, Skurfberg vines and some unusually dull weather.

The sole red wine in the collection is – of course, given the past-recuperating nature of Eben’s project – from cinsaut, which was for many decades, until the mass plantings of chenin in the 1960s and 1970s, the Cape’s most planted grape. This cinsaut vineyard is on the magnificent L’Ormarins-owned farm near Riebeek Kasteel in the southern Swartland (from which I have no doubt some stupendous wines should be emerging some time).

In what should prove to be a wonderful collaboration of two great but varied South African talents, William is to provide drawings to be used on labels for the six wines. In our tour of the vineyards the artist also learned some viticultural skills – in the pic alongside, Rosa Kruger is showing him the principles of suckering, removing unwanted early-season growth in the remote old vineyard on the farm ‘t Voetpad.

It was a great day – weatherwise an unusual one for these arid parts, as we saw many dark skies and experienced, in the coolness, lots of rain-flurries. We not only looked at the vines, but also tasted the wines they’d produced last season. To our great disappointment, we’d learnt that the wittily retro little restaurant that Eben, Rosa and I had discovered on an earlier visit, Die Afrokaan in the hamlet of Grafwater, had shut down. But we had a fine picnic on its stoep (in the pic below), and sampled the wines that Eben had drawn from their barrels the day before.

Of the wines there will be more to say in future. They are promising to be wonderful, these wines made from mostly unsung old vines whose fruit had hitherto gone into nameless co-operative blends. Hopefully – and this is one of the central points of Eben’s project with these wines, and of L’Ornarins’s willingness to send its viticulturist to explore for them – hopefully there will be lessons learnt about the treasure house of older vines that still – just – exist in South Africa, but are being pulled up at an alarming rate because they are not economical when their grapes are used for inexpensive, anonymous wines.

Eben does not make claims about quality lightly – but he genuinely thinks that the Skurfberg semillon blend he has made (it is still to complete its fermentation, nine months after picking! nature rules in this project) is perhaps the best white wine that he has ever made – this is the maker of Palladius speaking. And the others? They also promise to be both profound and fine. Undoubtedly the Kentridge labels should be a fitting accompaniment. We’ll see the unity of the wine and the art round about the middle of next year, with any luck. There’s unlikely to be more than 600 or so packs of the six wines, and I can’t imagine they’ll be cheap. But it will all amount to an unparallelled tribute to the Cape’s vinous past, as well as testimony to the excitement of its present renaissance.