A speech by Bronwyn Law-Viljoen at Lynda Ballen’s opening for DE DIVITIIS. 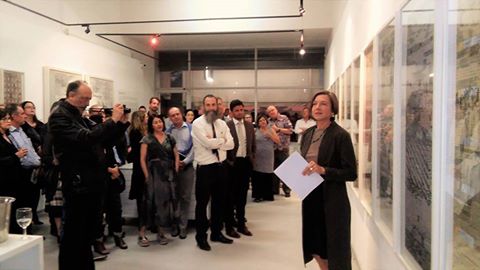 Embedded in the names of a bright yellow pigment is a small history that encompasses painting, alchemy and poisoning. Auripigment—from auris, the Latin word for ‘gold’; also known as Arsenikon—the ancient Greek word that combines a Persian word, zarnikh for gold or yellow, with the neuter form of the Greek word arsenikos, for ‘male’ or ‘virile’.

Pliny the Elder mentions this pigment in his encyclopaedia on natural history, published in the first century AD. He says that ‘it is found on the surface of the earth and is a gold colour, easily broken up like selenite.’

The pigment is distributed across the globe, starting in Asia around 3100 BCE, from whence it is imported through Turkey to Venice to make its appearance in Renaissance painting. It is also found on Egyptian papyruses from the thirteenth century BC. It is finally supplanted by Cadmium Yellow.

Another, the bright blue ultramarine, derives its name from the Latin ultramarinus meaning, ‘beyond the sea’, so named not because of its intense blue colour but because it made its appearance in Europe from ‘beyond the sea’. It is first made by crushing Lapis Lazuli into a fairly weak blue powder, but Persian craftsmen discover a way to extract the intense colouring agent and it is this version that Arab traders bring to Europe in the fourteenth century. The colour, when mixed with oil, is permanent and non toxic, but because of its source, very expensive. It too is supplanted by a synthetic version of the colour.

Then there is Sienna, yellow-brown in its raw state and orange-red when burnt. It is first mined in southern Tuscany, in an area controlled by the Sienese. The writer Giorgio Vasari calls it terra rossa but it is also terra gialla, or terra di Siena and it is used all through the Renaissance, the standard brown of artists from Caravaggio to Rembrandt.

A more ancient brown is ochre, found in the cave paintings of Lascaux, Chauvet and, closer to home, Blombos in the southern Cape. Also known by its Greek name haematite, from the word haema, for blood, it makes its appearance 164 000 years ago, and surfaces in chalk mines in Poland and Hungary, which suggests its use in the pottery crafts of the Upper Rhine 5000 years ago.

And so it goes: the green of malachite, barytas white, umber and burnt umber (first found in Umbria, although the finest form of the pigment comes from Cyprus), and jet black, derived from a material whose name points to its origin: lignite, while inorganic, is originally wood compressed under extreme pressure to form a stone that has been used in crafts and jewellery since the Neolithic period.

All of these strands of a long and varied history of colour-making are embedded in this extraordinary body of work that Lynda Ballen has called De Divitiis. I am struck, in particular, by the varied references to trade, movement and commerce, present in the history of earth pigments of course, but also in those of textile and paper making to which these works allude.

The work comes into being by virtue of these metaphorical and actual layers, generated over months of labour. It begins with the soggy mass of paper pulp that is infused with the fine powders of pigments so that each sheet acquires a subtle hue of pink, green, brown, yellow or blue. This is laid out and coaxed into scroll-like forms held together by string, then washed with gouache and marked with ink drawings whose ruled lines, dense cross hatchings, and flourishes give us the shades and volumes of landscapes that are at once strange and familiar.

It would seem to me, reading these works, that the labour of making and the attempt to master a technique are what generate their most important meanings. To make from scratch, the materials of one’s art is a kind of mad search for origins. It means, in other words, starting again: to make paper as the Chinese and the Indians made paper, to use the pigments that our forebears on this continent applied to rock images, to source the yellow that glows out of Rembrandt’s self-portrait of 1658, to travel imaginatively to the ochre pits of the Northern Territory of Australia in order to discover how an aboriginal artist generates a figure from the earthy colours of pulverised rock.

Despite the sheer labour of these works—their astonishing physical, three-dimensional presence—and their connection to the deep histories of art and weaving, trade and travel, alchemy and printmaking, they achieve a remarkable lightness and newness.

And certainly Ballen is by instinct and training a formalist, enticed by modernist versions of Renaissance theories on diminishing-point perspective, by the gestural flourishes of the ancient arts of Asian calligraphy, and even by the renderings of landscape familiar in our own art-historical canon.

But the work does not remain in either of these two modes: in technique and making on the one hand, and in formalist composition on the other. Rather, one senses of a search for something new, for some new way of making landscape. And this is achieved in Ballen’s ability to combine the elements of various traditions, but to reach out of these traditions so that the work does not feel heavy or overburdened.

So for example in the two works that she has called Aeonian (the title making reference to aeons) she has applied the earth pigment ochre in one of its lightest, most delicate shades of peachy-pink, on top, in the left-hand image of the diptych, of a mix of colours predominated by terra verte and, in the right hand image, of a mix predominated by ultramarine. The impression one has of a monochrome image of soft colour and delicate shading, is quickly displaced by a secondary realisation of a rich, layered colour and texture. We are not looking only at green and blue, with windows of pink ochre. Rather we are confronted by a simultaneous sparkle and wash of colour. At the same time, the craggy overhangs of rock, the bulging of cloud formations, and the movement visible in the foliage in the bottom of the image window belie the impression of gentleness, of a quiet contemplation of landscape as sublime object. Ballen’s encounter with rock and tree and threatening cloud yields an image that is dense with anticipation. At the same time, the bold striations across the bottom of the work suggest to me the wall drawings of Sol Lewitt, or the pattern paintings of Lee Krasner, or the fantastic grid drawings and paintings of Agnes Martin.

In all of these Ballen is searching for her own points of reference, in the distant and the near past. She is interested in taxonomies, in networks, in technique, but she deploys these in service of an deep engagement with her own, particular, local history.