The series is a continuation of Hindley’s previous visit to DKW when he made two drypoint plates, resulting in richly detailed etchings, titled Formation and The Distant Clouds:

Formation and The Distant Clouds recently featured on the small works show at David Krut Projects (DKP) Parkwood, Inch x Inch (2016). The rest of the series will be shown by DKP at the Johannesburg Art Fair 9-11 September 2016.

With the help of DKW printer Kim-Lee Loggenberg, Hindley conceptualized his etching series as a grid of 9 separate works, printed with different colour variations.

The series forms part of a larger project, titled Ruin Lust, which incorporates paintings by Hindley in addition to watercolour monotypes, which he made with DKW a few months ago. These works can also be viewed on Hindley’s artist page.

Hindley explains:  “I am putting a modern spin on the concept of ‘ruin lust’ by representing contemporary  images of destruction drawn from media reports. This is a different approach to the art made in the 17th  century which depicts picturesque ruins. I’m expanding the limits of the term by focusing on the moment of destruction, which precedes the ruin. In my drypoints, monotypes and paintings I reflect the violent present in which we live and tap into our primal attraction towards ruins”. 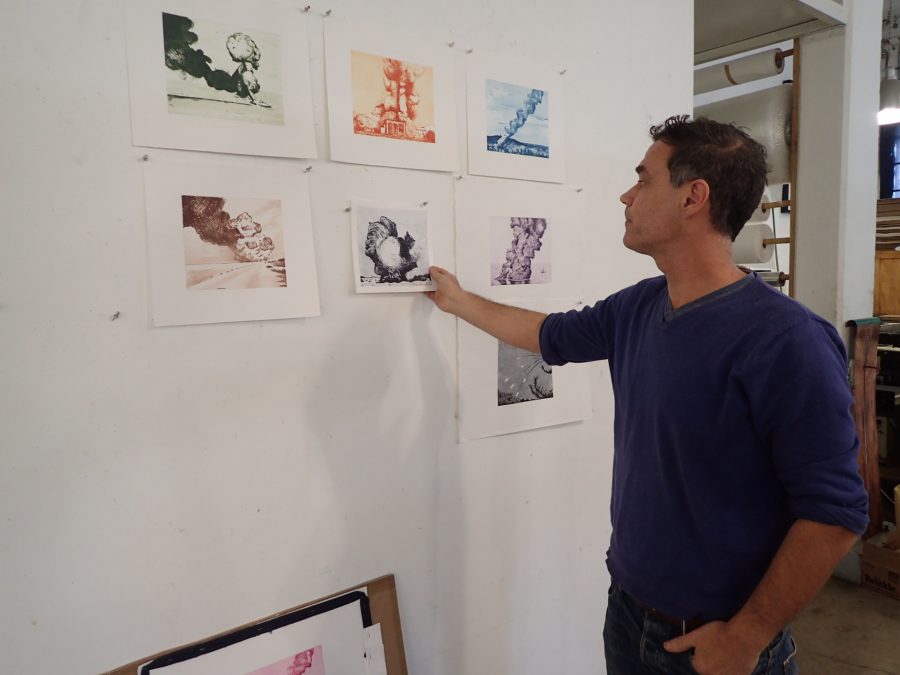 Hindley is attracted to bright colours which have been somewhat “dirtied or dulled”, as he puts it. As a result, Kim-Lee mixed raw umber with bold colours, such as violet, cyan, orange, sap green and magenta to create the desired tone for each print.

As well as experiment with colour, Hindley welcomed the opportunity to develop his burnishing skills. He explored mark-making techniques and enjoyed the process of re-working his plates to achieve strong contrasts in each image.

Hindley’s time in the workshop has creatively fed his painting: “by developing mark-making with drypoint, my approach to painting has changed. I am now making drypoint-style oil paintings, which ultimately means incorporating a decisive quality of line for which you need to have conviction, bravery and a looseness to your approach. In a sense, it is a return to drawing, to the original mark”.

To view one of Hindley’s exciting grid configurations for his etching series, please click:

To see the full range of drypoints and watercolour monotypes produced by Hindley at DKW, please visit his artist page.

To read more about the concept underpinning this etching series, take a look at the blog post Explosive beauty / Beautiful explosions.

Hindley’s drypoints will be exhibited by DKP at the Joburg Art Fair this coming September.