In this video, ART AFRICA met up with Wilma Cruise at her beautiful studio in Noordhoek, Western Cape, to discuss her upcoming projects and the interface between humans and animals and existential conditions of muteness in her work – silent, internal battles in the search for meaning.
Wilma Cruise is a celebrated South African sculptor and visual artist. Working mainly with fired clay on a life-size scale she has held over twenty solo exhibitions, curated numerous others and completed a number of public artworks, including the national monument to the women of South Africa at the Union Buildings in Pretoria.
Advice from a Caterpillar at David Krut Projects in Johannesburg in 2015  saw the launch of a new series of prints by Cruise, as well as the opportunity to view some of her recent bronze sculptures at David Krut Bookstore, 151 Jan Smuts Avenue, Parkwood, Johannebsurg.
Wilma Cruise is a South African sculptor and visual artist spent some time at the David Krut Workshop at Art on Main in Maboneng, Johannesburg.  Her previous collaboration with DKW printers in 2008 yielded a solo exhibition called SPLIT LON.NY.JHB. 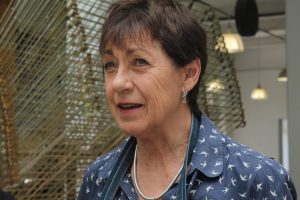