Interview with Deborah Bell at the David Krut Print Workshop, Arts on Main

Artist Deborah Bell took some time out from signing her new editions to chat to us about her new etchings. Bell stresses that the imagery, symbolism and meaning in her work often only becomes clear to her over time. She does not set out with particular symbols in mind, with the intention of conveying a certain message.  She is often surprised when she looks back at her work to see that certain images recur without her having consciously realised it, and their meaning and importance to her personally are something that emerge and evolve at their own pace. 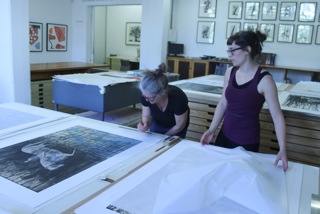 Bell working on new plates and signing her new editions at the DK workshop.

For Bell her Annunciation series is not about the Christian story of the annunciation, but rather about personal transformation. The angel, a recurring theme in Bell’s work, beckons towards change.  In Annunciation I and II Bell uses the symbol of a high-heeled shoe, denoting ties to the human world, suggesting that the figure in the work is not quite ready for a personal journey of transformation.

All three Annunciation works feature a lion – another image that has appeared frequently in Bell’s work.  It was after spending time at Jack Shirreff’s 107 Workshop in the UK in 2000 that the significance of the lion began to assert itself to Bell.  A series of connected, yet coincidental, events (described in detail on page 16 of Deborah Bell’s Alchemy) during this stay emphasised the image of the red lion and led to her works Red Lion I and II. While attending a solo show of her work, The Journey Home, in London after her time with Shirreff, Bell was surprised to see that she had in fact been using lion imagery in her work as far back as 1991 (Little Morals).  However, the lion had evolved from being depicted as wounded and vulnerable (based on Sumerian reliefs of a lion hunt in the British Museum), to strong and sometimes winged.

Lions have commonly been used throughout history to represent courage, power and transformation. For Bell, her early lions represented a wounded self, whereas her later lion imagery represented a more fully actualised self (e.g. Couer rage, 2010).   In Annunciation, the angel figure is calling towards this ideal.

Just as Bell was surprised when she noticed how far back her use of lion imagery dated, she was again recently reminded of an early version of Annunciation she had done back in 1995 (collage on paper). A family friend sent her an email with a photograph of this early work hanging in the Smithsonian Museum of African Art (donated by a private sponsor to the museum in 2008). 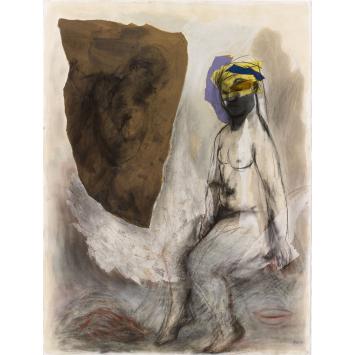 Bell made a series of sketches in her notebooks – her primary source material for her etchings – from her visit to the Museu Picasso in Barcelona which houses a series of 58 paintings done by Pablo Picasso in 1957, reinterpreting and recreating Las Meninas. The image of the young Spanish Infanta, Margarat Theresa, a symbol of youth and innocence for Bell, appears in several of her prints and paintings.

Bell shows one of her sketchbooks she uses for her etchings.

Mirror Matter I and II

Mirror Matter I and II are based on sketches made at a museum in Barcelona of shadows made by damaged wooden crucifixes (Bell could not recollect the exact work). The shadows were then inverted (mirrored) so that white figures appear on a black background. Mirror Matter I  has the Latin words Noli me Tangere written underneath, meaning “touch me not”, and refers to the words spoken by Jesus to Mary Magdalene when she recognised him after his resurrection. The words are written backwards, requiring a mirror to read them. Mirror Matter II shows the figures of Orpheus and Eurydice and explores the themes associated with them in Greek mythology (Orpheus attempting to retrieve his wife Eurydice from the underworld). Both works  explore themes of death, the underworld and the state beyond life.

Parsifal  is the name of a mid-19th century opera by German composer Richard Wagner based on the 13th century epic poem by Wolfram von Eschenbach about Arthurian knight, Percival (spelt “Parzival” by von Eschenbach) and his quest for the Holy Grail. Bell previously explored this imagery in multi-media works under the title Renunciation (2012).  Bell worked on the Parsifal prints under the guidance of US based master printer Phil Sanders while he was spending time at the David Krut Print Workshop at Arts on Main earlier this year (2014).  Sanders encouraged Bell to rework her earlier paintings into colour etchings.  The knight Percival is depicted by Bell as a youth, not quite yet a man, again symbolising innocence, as with the Spanish Infanta in Reveal.