by Simon Lee, courtesy of http://www.guardian.co.tt/entertainment/2013-11-19/award-critical-spaceman 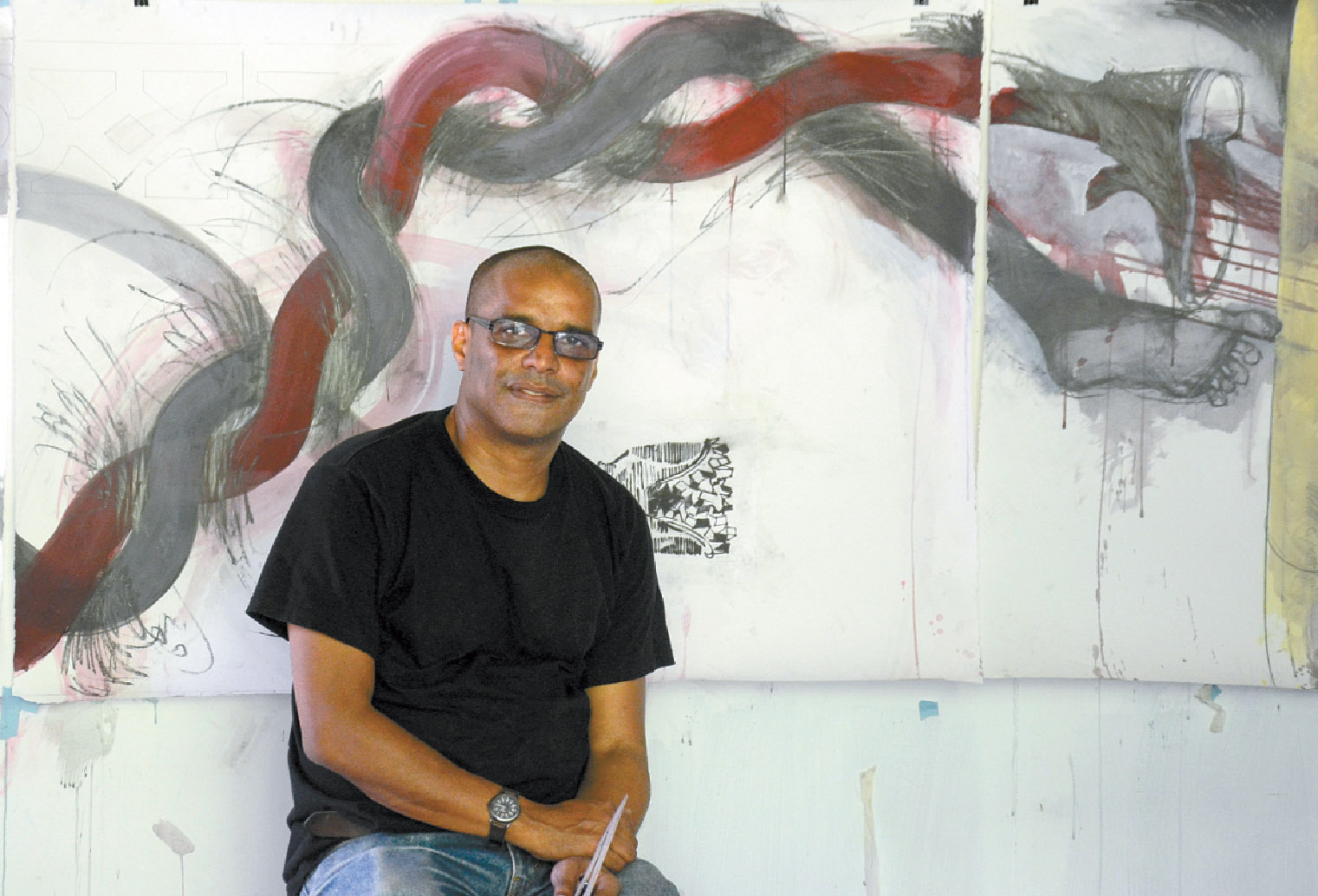 Even if you’ve never heard of him (because he’s not a gallery man in either sense) or wittingly seen his work (although you may well have seen it on walls in town) let’s throw our hats in the air for Christopher Cozier, one of the 2013 Prince Claus awardees. Cozier now joins the ranks of other Caribbean Claus laureates like Peter Minshall (who won the principal award in 2001), Chalkdust, Haitian writers Franketienne and Kettly Mars, Jamaican writer Erna Brodber and Martiniquan writer Patrick Chamoiseau. Since 1997 the Prince Claus Fund of the Kingdom of the Netherlands has been honouring 11 individuals or organisations “whose cultural actions have a positive impact on the development of their societies.” Espousing what may often seem in T&T the unfamiliar concept that “culture is a basic need,” the Prince Claus Fund has made a policy of “highlighting significant contributions in regions where resources or opportunities for cultural expression, creative production and preservation of cultural heritage are limited.” Consequently, awardees are selected from Africa, Asia, Latin America and the Caribbean.

It is salutary to note that among the criteria used for selecting awardees are: “artistic and intellectual qualities, experimentation and innovation, audacity and tenacity.” Cozier’s citation describes him as “…a multi-talented cultural activator with a profound impact on cultural development across the Caribbean.”  Besides “his informed and incisive artwork in diverse media,” Cozier has been honoured for his mentoring and support of “local and regional artists, providing critiques, establishing dialogues with them across virtual space and initiating opportunities.” The Prince Claus award also acknowledges Cozier’s seminal contribution “in the evolution of contemporary art discourse in the Caribbean,” which has been rapidly expanding and receiving global recognition, thanks in no small part to Cozier’s prolific writing, and his ten-year editorship of the Jamaican-based journal Small Axe. “His commitment to research and critical enquiry have expanded the dialogue between traditional academic disciplines and the visual, and helped to liberate local discourse from predictable tropes and stereotypes.”
It is no exaggeration to say that what the UK-based Jamaican cultural theorist Stuart Hall has been positing about Caribbean and diasporic culture and identity (“Far from being eternally fixed in some essentialised past, they are subject to the continuous ‘play’ of history, culture and power…identity…constituted, not outside, but within representation”) since the 1970s, central to his development of the postmodern multi-disciplinary school of Cultural Studies, has been deconstructed and taken in new directions by Caribbean-based artist/writer/thinker Christopher Cozier.
And yet, he was genuinely surprised to be nominated: “It was unexpected.” Mindful of previous Caribbean awardees, Cozier also paid tribute to another 2013 awardee, the Colombian artist Oscar Munoz and was “glad to be considered in that category.”

Ironically, Cozier got the news of his nomination back in June prior to his show in Berlin, while a guest of Dorothea and Ulric Fiedler, a German Koln-based couple, “some of the first solid supporters of contemporary art in T&T.” During their stay here in the early 1990s, the Fiedlers accumulated the largest collection of contemporary T&T art, all now in storage in Germany. Cozier remembers the local derision directed at these foreign collectors and contrasts the “mint condition” of their collection, with the one piece he lent the National Museum here: “I got it back 10 years later, completely destroyed.”  Cozier’s reflex response to the generous Prince Claus 25,000 Euro award is, “It allows me to take risks.” As a father of four, operating in a society which has historically been wary at best, but more usually hostile, to experimentation in the arts, Cozier is well aware that “A lot of artists here have to do things they don’t want to. Watercolour and landscape painting is the (equivalent of) bikini mas.” He’s pragmatic enough to recognise, “The Art World is where the money is…I’m not judging it” and his praxis can be seen as a logical development of the close relationship between the avant garde and commodity culture. Consequently given the dearth of opportunity here (to earn a living, pay the bills) from his art, “One of the main reasons I show abroad rather than here, is that I get commissions.”

Much of Cozier’s concern about how art is perceived/misconceived in T&T focuses on limitation, which stifles rather than promotes production and experimentation, particularly with young artists: “Here you’re not encouraged to do stuff. Abroad they’ll tell you, “Do something to impress us…we want excitement.” While he’s still wary of outsider appropriation and essentialising of Caribbean art, which prompted his return in 1989 after studying art in New York, 20 years on, he hopes “We’ve passed the stage of the ‘exotic Other’ (although recently a woman in Kentucky commented with the unwitting condescension of ignorance ‘Wow you’re so articulate!’).” Negotiating a middle passage between here and there has never been easy for Caribbean artists; “Searching for ways to create meaningfully in what…have become very aggressive, shrewd, utilitarian and mercantile-driven Caribbean societies, is quite a challenge.”
Art has never been liberated from its subsidiary plantation-society status: “We only encounter art in commercial spaces. Gallery spaces are only about selling, so the public has a limited view.” This limitation is compounded by media coverage- or lack of it – as generally the media only covers what is shown in the galleries. He contrasts this deficiency with the half page article in a leading Danish newspaper about a joint show he held in Copenhagen, Denmark with a Chinese artist in 2002.

Consequently, as an individual artist Cozier has only mounted four solo shows in Trinidad, (the last in 2000) while showing extensively abroad (most recently: Tate Liverpool UK 2010, Johannesburg, South Africa 2011, Kentucky USA 2012, New York, Berlin, Miami 2013). For many others the only option is to leave, in order to escape the constraints of our mostly commercial conception of art. “All our major figures are transnational, on the move. Even the ones who claim to be ‘local’, do lecture tours.” Ironically it is the new generation of artists, whom Cozier has been aiding and abetting for more than two decades, who thanks to digitalisation and the internet are making it “out there”. Again Cozier is critical of the lack of recognition/validation they meet at home, compared with sportsmen and women or even our writers; “How do we define accomplishment for artists?” It was precisely to address such issues and as a response to “local institutional defiencies” that Cozier, along with writer/critic Nicholas Laughlin and musician Sheldon Holder established Alice Yard, a non-profit organisation based in the Lennard family backyard on Roberts Street, Woodbrook in 2006. “It was important to create a space within which people…can feel the freedom to try new things.”

The Yard hosts artistic, literary and music programmes, and aids projects in start-up and developmental stages. Its reach has now spread far beyond Trinidad, with visiting in-residence artists, curators, film and video makers and new media practitioners all participating. Young artists have embraced cyberspace and its possibilities, which for Cozier has created a “critical space” where conversation and dialogue, collaboration and innovation are now possible across previous geographic and national divides: “access allows a new generation of artists to create images and disseminate them in ways that break down traditional hierarchies of skills and specialised knowledge as a means to define value.” The challenge is now for governments and institutions to recognise these opportunities. As an advocate for contemporary Caribbean art, Cozier has curated important regional and international exhibitions including Paramaribo Span (Suriname 2010), Wrestling with the Image: Caribbean Interventions (Washington DC 2011), which featured 36 artists from the Anglophone, Francophone and Dutch sub-regions and is currently a 2014 Satellite Advisory Curator to the prestigious international biennial SITE Sante Fe, New Mexico.

In the catalogue to Wrestling with the Image, Cozier articulates the possibilities for a more inclusive Caribbean aesthetic, which moves beyond the parochial, nationalistic or insular. He writes of a Caribbean “as space rather than place”, a space “shaped by wherever Caribbean people find themselves…a dialogue about dispersal, rather than just displacement.” He also writes of his empathy with the artists at that particular exhibition “for them, the region remains an ongoing work in progress..their works allow us a glimpse into the multi-faceted experience of the Caribbean.” In the face of mass and commodity culture and the negative inroads globalisation has made in Caribbean societies, we need all the glimpses we can get, to know and recreate ourselves. Undoubtedly Cozier, like Papa Legba, is keen to open the gates for all and fully deserves the Prince Claus award, which will be presented to him here next month.