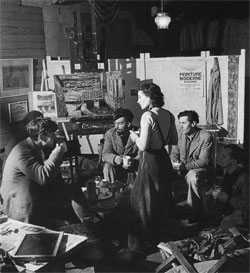 Wilhelmina Barns-Graham was a key member of the St. Ives School, and leading innovator of British modernist abstract painting and printmaking, an artist whose contributions have long been recognized in Britain as historically undervalued. The exhibition presents work from the later stages of her career, when use of bold, passionate color was increasingly employed to convey what the artist’s biographer calls her “awareness of inner, shaping principles and formative forces, rather than merely…external appearances” in nature. David Krut Projects presents a selection of paintings, drawings, and prints by Wilhelmina Barns-Graham, and will be on view from March 8 through April 12, 2008. The exhibition is presented in cooperation with Art First London and The Wilhelmina Barns-Graham Charitable Trust.

Barns-Graham’s later works result from a process she called “laying bare,” in which she stripped away extraneous, visible elements from natural subjects–beaches, a Swiss glacier, the wind–in search of their hidden interior, even spiritual, power. In a sense her works are paradoxical, combining vivid, turbulent colors and lines to convey this power, yet simultaneously revealing the serenity of mind that was essential to her creative process.

Supporting herself through making art, Barns-Graham exhibited consistently in Britain and internationally from the 1940s onward, and was included in several surveys of the St Ives School, including “St. Ives Past and Present” at the New Academy Gallery in London in 2001, and a solo retrospective “Wilhelmina Barns-Graham: an enduring image” at Tate St Ives in 1999-2000. Her works hang in major collections throughout the United Kingdom, including those of the British Museum, the Tate Gallery, the Victoria & Albert Museum, and the Scottish National Gallery of Modern Art. Her first monograph, W. Barns-Graham: a Studio Life, by Lynne Green, was published in 2001.

Accompanying this exhibition is a second monograph, The Prints of Wilhelmina Barns-Graham by Ann V. Gunn, Lund Humphries (2007), which focuses exclusively on the artist’s printmaking, which became increasingly important in her later years, benefiting from a fruitful relationship with the Graal Press in Edinburgh. Works from this period of her career will be strongly represented in the exhibition.

A special reception will be held for Armory Week on Thursday March 27, 2008 from 6-8pm.