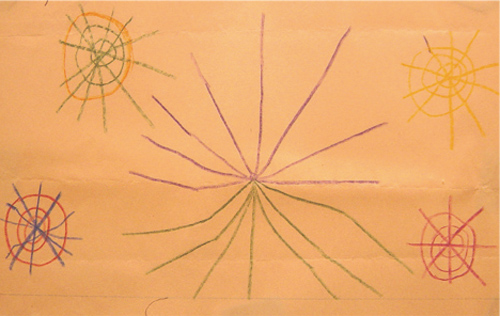 The eleven artists drawn together for I WAS A SUNBEAM, approach works on paper from the various standpoints of sculpture, performance art, painting and printmaking, casting light on the differences in materiality and hand.

Cy Amundson acknowledges his admiration of European painting from the twenties and thirties in this odd ball head study, using collage, gouache, inks and pen. The geometry of Malevich and also the formal structuring of Pisanello’s Portrait of Ginepro d’ Este come to mind, with a rascally beauty that is artist’s own.

Glenn Goldberg paints obsessive, recurring symbols of generic birds and flowers, abstracted and repeated religiously, placed in various environments and left to stand alone in his intimate works on paper. to see, to know is a precious work, ink and watercolor on paper, with a stamped double initial signature that suggests printmaking, branding and motif. to look, and then to watch. nothing in its physical constitution has changed. we keep looking because it is slowly and subtly animated. this is the quiet hope. GG

Jaya Howey untitled graphite drawing suggests glimpses of the underlying armature one detects in his paintings. While the more abstracted paintings build up slabs of paint to an impenetrable surface at points, the graphite work draws the viewer in through the hint of perspective and the lure of a dark forest in the upper plane. We are directed through a landscape of rafters, beams, corners, triangles and rows, but left to find our own path through the work.

Sam Martineau works with a combination of visual languages in his untitled collages. Often, found objects are used to generate an image: here a plastic California Celery bag that exists in itself as an abstraction, is used as a ground on which matte paint, painterly brushwork and hard edged shapes coexist.

In her monotype diptych, Oooo, Suzanne McClelland fashions the architecture of her pictorial space with a Rorschach-like mirrored composition, and the suggestion of sound waves echoing from the center out. The artist’s singular exclamation of amazement and interest has a crisp, emphatic ring in the left hand panel, while the voice in the right panel is muted, embedded back under swipes and scrapes of color.

The central grid structure that drifts out of the landscape, either dusk or dawn, in Dave Miko’s Tankers is uneasy, enigmatic and dreamlike. The place and the time of day are mysterious, while the subject slowly announces itself out of the shadows, like a ruined billboard structure.

Sheila Pepe’s Sky High 2 is constructed from multiple paper cut outs. In one sense she is building upwards, the paper alone physically building a tower. Within each piece of paper, the perspective jumps in and out as the viewer is lead through passageways and chambers at close range or at a distance, to its own effect of teetering force. A vignette of the ugly beauty of industrial New York, the inky black line forms city conduits, ladders, rail tracks and signage.

Carrie Pollack’s works are matter of memory, physical memories and instances of deja vu that come to the surface through her slow distillation of quick photographic snap shots or observations- the quick method of gathering information through digital media in contrast to her careful mark making and belief in the importance of the hand. Pollack collects photographs in a diaristic record of her life that she sifts through continually, pulling out the abstracted essence into her quiet works. In this untitled work, the smears of oil paint float against a pencil drawn grid, while the oil oozes out into delicate halos shadowing the forms.

Jessica Slaven’s Ouijja board 2 presented on an old card player’s table, is a relic from her performance pieces. The ouijja board works are used to pull letters out of the spirit world into chance works spelling words such as Pruno. The work can be read in the context of the geometric spiritualist works of Hilma af Klint, Emma Kunz, and Shaker art, or simply as a pool for color, light and language.

Stanley Whitney’s untitled piece is a blocked structure made up of individual cells, each composed in graphite. Overlapping starbursts, spasms, thick tangled coils, spastic marks and lyricisms appear in Whitney’s touch. These building blocks speak of the color tonality in Whitney’s paintings, but with an airiness that allows the surface of the paper to break through underneath.

With Wallace Whitney’s works on paper, we get a first hand delivery of his bombastic approach to painting. Spray paint, fat oil pastel and fresh cadmium red paint compose this matter of fact abstraction, while delicate tracings of graphite diamonds hover above.