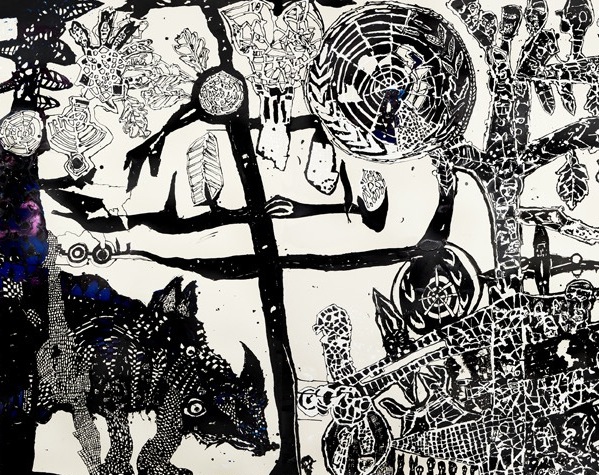 David Krut Projects is pleased to present Burn Freeze, Australian-based artist, Locust Jones’ first solo exhibition with the gallery. The exhibition consists of new drawings and prints including Jones’ brand new ten-meter long ink drawing and a suite of prints created during a residency at the David Krut Print Workshop (DKW) in Johannesburg.

Obsessed with the media, Jones’s work addresses social, environmental and political ills. He collects newspapers and magazines from around the world and surrounds himself with the endless stream of television and radio broadcasts. Through relaying the media’s chatter in fluid ink, he re-presents the news as a tenaciously seeping, and often pathetic beast – full of mysterious coincidences and human errors.

Jones’s newest monumental drawing titled summermurderer forms an enormous repository of recent global events. Up close: drips, dots, and smears on the surface, read like buzzing static on the screen. Newspaper clippings, radio and television broadcasts are presented in washes of drippy ink and saturate the surface along with familiar political figures and hand-scrawled phrases culled from daily crossword puzzles. By including both the mundane and the tragic, this massive conglomeration of imagery becomes darkly comic interpretation of the effect of information overload.

Jones’s etchings and linocuts, created during his stay at the David Krut Print Workshop (DKW) in Johannesburg, show the complexities of South Africa through stories told by residents and first-hand accounts Jones witnessed while traveling. In these works, Jones comments on social ills and injustice, quoting from the recent massacre of miners in Marikana, to accounts of local petty crime in the streets of downtown Joburg. The works lend insight into Jones’s time in Johannesburg, and trace the historical origins of some of his most common motifs such as the rhino, the checkerboard pattern, exotic plant life, and snarls of tangled razor wire.

Locust Jones was born in Christchurch, New Zealand and currently resides in The Blue Mountains in New South Wales, Australia.  His work is represented in public collections including the National Gallery of Australia, Art Gallery of South Australia and the Centre of Contemporary Arts, Christchurch. He has completed residencies in Seoul, Beirut and New York and in 2009, he was the winner of the Hazelhurst Works on Paper Award, and the prestigious Fishers Ghost Art Award. 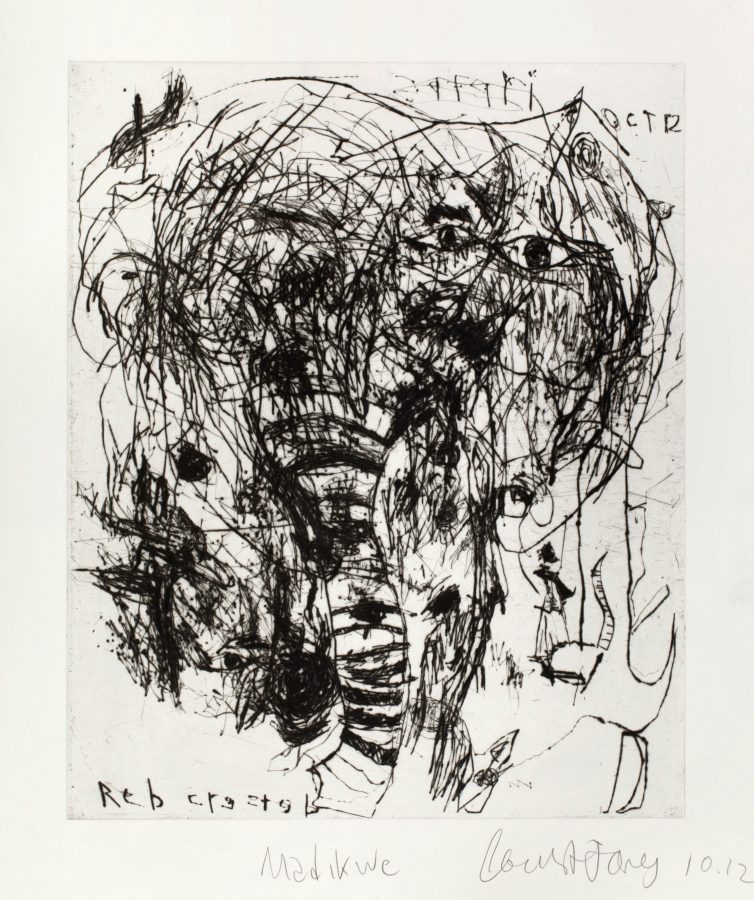