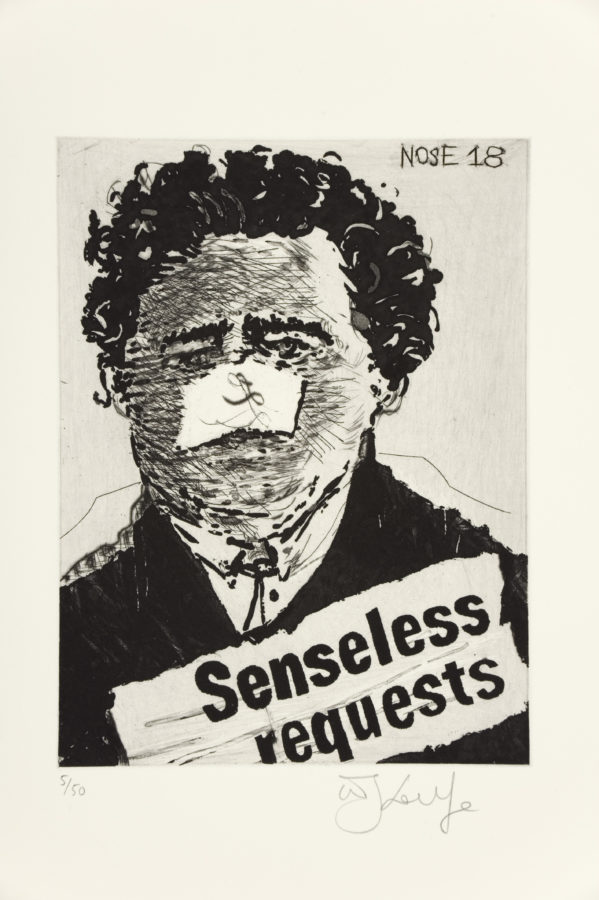 INTELLIGENCE OF THE HAND

The print is a collaboration between artist and printer. Each printer or print workshop under the direction of a master printer has a style of printing that affects the relation of the plate to the print. Some printers heat the plate before inking, some ink up cold. Some soak the paper for hours and then dry it just before printing; some only moisten the paper between sheets of blotting paper. Some printers wipe the ink off the plate with tissue paper, some use only the palm of the hand, slowly wiping the ink off the smooth sections of the plate, leaving the ink in the lines and burrs and aquatint.

These prints were made by Jillian Ross, printer at David Krut Print Workshop—cold inking, soaked paper, tissue wipe. She was assisted in the editioning of the prints by Niall Bingham and Mlungisi Kongisa. In the journeying backwards and forwards from studio to etching workshop, from trial proof back to plate, a sphere of expectation is made within which the whole series developed. This conversation—visual and verbal—was one of the chief pleasures of making this series of prints. The degree of plate tone, the fineness of aquatint, the rich leavings of the aquatint, do not simply give a jizz to the prints but also suggest directions and limits to the images themselves.

A member of the party from 1901 and a member of the Central Committee in 1921. He was found guilty in the first show trial of the Great Purge and shot in 1936. (Curly hair.)(Senseless requests.)

Nose 17, Nose 18, Nose 19, Nose 20 and Nose 21 form a miniature narrative of their own within the suite of etchings. Each print is a portrait with the face of the sitter removed in some way. In his text for each print, Kentridge provides information about who the sitter could be, although the face is not visible, playing on the common practice of erasing people from photographs that Kentridge refers to in his text that accompanies Nose 17:

“In the 1920s, Trotsky was airbrushed out of all photographs that showed him with Lenin. We are by now so familiar with this emblematic erasure of history that in all the group photos of Soviet luminaries, we look for or anticipate the absent figure in the crowd, a spirit of Elijah, at the table but invisible. We glance over the rows of sleek faces, but are entranced more by what or who is not there than by what we see.”