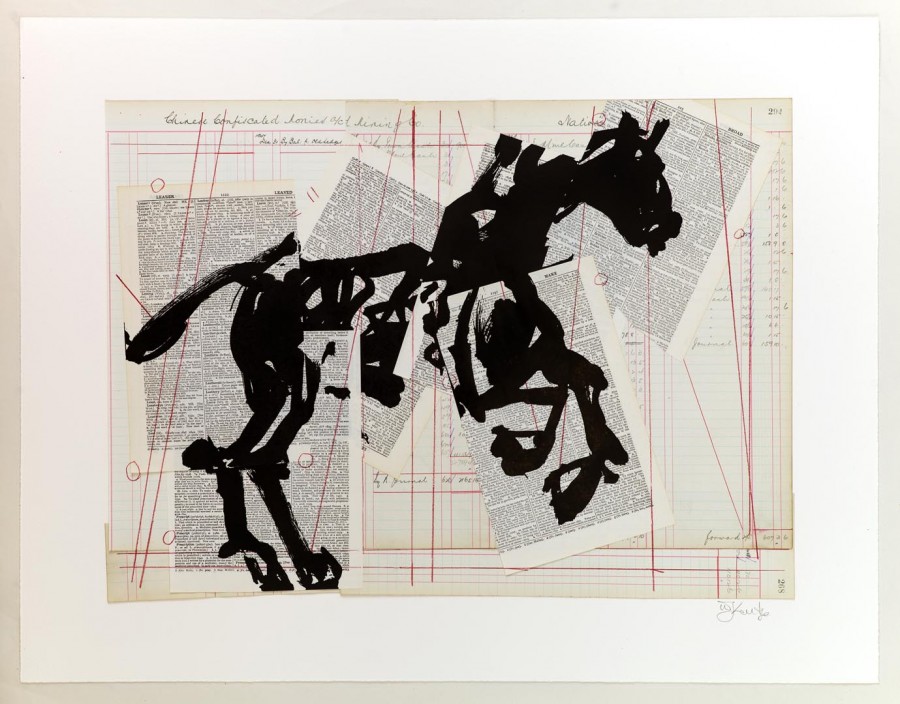 Universal Archive (Horse) is the final and most densely layered multi-sheet work created as part of William Kentridge’s Universal Archive series of linocuts (2011 – 2015). Six linoleum plates were carved to fit and print onto individual sheets of non-archival 1950’s Shorter Oxford English Dictionary pages. These printed dictionary pages are attached to four overlapping sheets from the East Rand Proprietary Mines Ltd Central Administration ledger, each holding varying amounts of hand-written script from over a century ago. Every dictionary and ledger page used within the edition is unique, creating different combinations of words, meanings, and associations from one edition to the next. The base sheets have been tabbed to create a support grid but also to allow the sheets moments of movement. The same movement is also found in the way the printed top sheets are attached to their support. Additional red lines and registration circles were added by hand, many at a diagonal, alluding to the strings that operate a puppet from above, and the long-standing collaboration between William Kentridge and the Handspring Puppet Company.

Many possibilities were explored for overlapping the six printed sheets in order to achieve movement and a sense of effortlessness in the work. Every aspect of the print was planned down to the tilt of the individual pages, including cutting the top right page (the horse’s head) short. Unbeknownst at the time, this layering process used in many of the artworks in the Universal Archive series later informed William Kentridge’s collaboration with the David Krut Workshop on the monumental woodcut series, Triumph’s and Laments (2016-2019).

See below a video of the assemblage of the work, and read further here about Kentridge creating images – specifically a horse – out of torn sheets of paper, from his Six Drawing Lessons, which he presented in 2012 for that year’s prestigious Charles Eliot Norton Lecture Series at Harvard University.