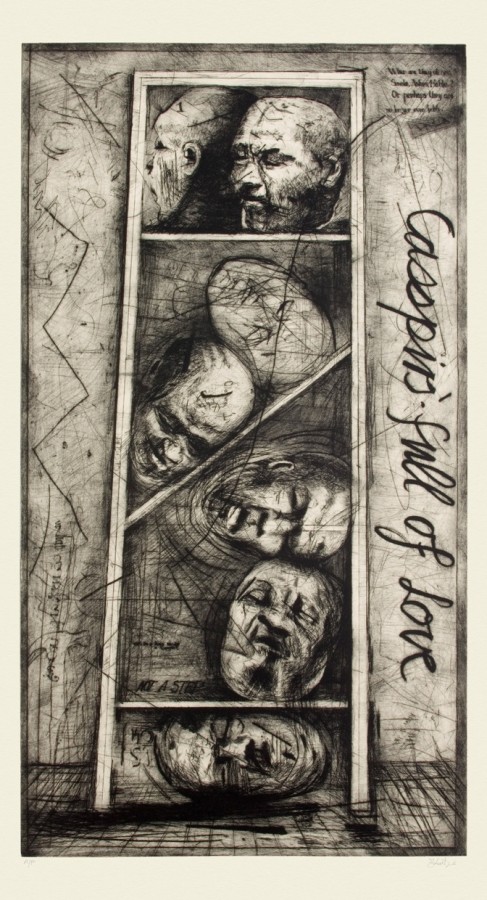 The origination of the plate for Casspirs Full of Love dates back to 1989, and represents Kentridge’s first foray into making prints on a large scale. Kentridge printed the first 17 editions, some of which are marked from 25 rather than 30, with the help of Elizabeth Dell at the print studio of University of South Africa, which, at the time, had an etching press large enough to accommodate the size of the plate.

Each of these first 17 prints is slightly different because Kentridge worked further into the plate between each printing – partly as a result of the extreme pressure of the press, which has the effect of flattening the drypoint marks made into the soft copper, and partly as a way to experiment with and continually interrogate the medium. The process of printing the plate himself with a single assistant was intensive in terms of labour and time, and so after the first 17 proofs were pulled, Kentridge put the plate aside, intending to come back to it at a later date. In 1999, with the balance of the edition still remaining to be printed, David Krut suggested that the plate be sent to Master Printer Jack Shirreff, who completed the edition with his assistant, Andrew Smith, at his 107 Workshop in Wiltshire, England. Shirreff had a steel-facing facility in his studio, which allowed him to deposit a very fine layer of pure iron onto the copper plate, thereby reducing the flattening action of the press. Therefore, 18-30 of the edition, as well as the ten proofs (marked I-X) are identical in comparison to the first 17 prints pulled by Kentridge himself.

To read Kentridge’s own perspective on the creation of this edition, click here.