Portrait of a Young Nelson Mandela 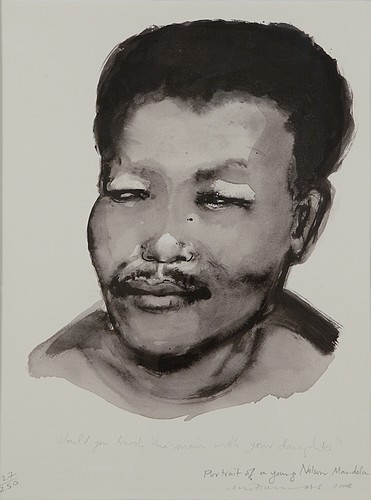 Marlene Dumas is a South African born, Amsterdam based painter, and one of Holland’s most internationally admired artists. She received a BA Fine Art from the University of Cape Town in 1975 and also studied at the Institute of Psychology at the University of Amsterdam from 1979 – 1980 (www.saatchigallery.uk).

Dumas recalls in her work the “painterly gestures of Expressionism whilst combining the critical distance of conceptual art with the pleasures of eroticism” (Firth Street Gallery). She comments on the state of painting today through her oil-on-canvas or ink and watercolour artworks on the female form: their expressions, their body and facial typologies, their self-image and their ideals. Her works ask what it means to be a woman working within the predominantly male genre of expressionist painting. The relationships between art and female beauty, or between historical art models and twentieth-century supermodels, are constant themes in her work. The artist also depicts children in her work. Dumas does not paint from life but from ‘stock’ images found in magazines, on postcards and from Old Master paintings. She then reworks them through her contemporary perspective.

She has exhibited throughout the world, from The Tate Gallery in London to the Museum of Contemporary Art (MOCA) in Los Angeles. For the Soccer World Cup held in South Africa in 2010 David Krut Publishers was and is the sole distributer of the Official FIFA Posters. Dumas was one of the sixteen local and international artists who contributed artworks for these posters.

PODCAST│David Krut on the limited edition 2010 Fifa Posters: How it all started News, Podcasts, Uncategorized