Where your mom is

To A Special Father 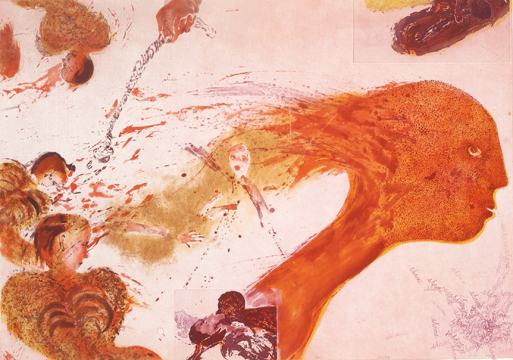 Penny Siopis has exhibited extensively both locally and abroad. In 2002 Siopis had an exhibition in Johannesburg entitled Pinky – Pinky and other Xeni. Subsequent to this show, Siopis worked on the Shame series and Siestog prints together with David Krut Workshop (DKW), relating to that previous body of work.

It was subsequently shown at David Krut Projects (DKP) Johannesburg and Cape Town.

Siopis has also been featured at various group exhibitions at DKP.

Peny Siopis was born in Vryburg in 1953. She studied BA Fine Arts at Rhodes University as well as a post-graduate course in painting at Portsmouth Polytechnic, England, before taking up a lecturing position at the Natal Technikon in Durban. In 1984 she moved to Johannesburg and since 1995 has lectured in the Department of Fine Arts, University of the Witwatersrand. Until early 2010, she held the position of Associate Professor in Fine Arts but has since moved to Cape Town to work as a full-time artist.

Siopis became very well known for her ‘banquet’ paintings (particularly Melancholia, 1986) and her ironical history paintings in the 1980’s, the latter focusing on questions of race and gender representation in public history. During the 1990’s she extended her range of media to include monumental installations, printmaking and video. She is particularly interested in the intersection of biography and autobiography in narrating aspects of South African history through film. Her later bodies of works often deal with concerns of shame, violence and sexuality.