Faith47 is best known in South Africa for her influence in the street art arena, but she is fast making a name for herself on the international fine art scene, with museums and galleries showing a keen interest in her studio work. From May to September, two of Faith47’s new works will be featured in an exhibition at the Von der Heydt Museum in Wuppertal, Germany.

The street and the studio are essentially two very different environments. In moving a practice directly from street to studio, what is lost is the context that inspired its creation in the first place, and formed an integral part of its existence – the reality of the inner-city, the work of other artists and street poets, the humdrum of traffic, rubble, decay and, perhaps most importantly, traces of the people that interact with the city and the work. While her roots lie in street art and her inspiration in urban environments, in her on-going and dynamic transitional process from street to studio, Faith has retained the heart of her street work. Although necessarily viewed in altogether different contexts, the grit of the inner-city has been incorporated into the work.

The two works that will be travelling to Germany indicate this movement of the street into the studio, appearing as a “crystallisation” of various elements of Faith’s street work. As a canvas, Faith has used church windows that she stumbled across in one of her many hunts through the city for useful objects to bring into her studio. She has then worked onto the windows in oil paint, spray paint, graphite and collage; some of the elements are clearly recognisable as purely her own, while other elements seem to have been lifted directly off the street.

The graphic elements, which are rendered in Faith’s signature style, are versions of symbolic religious images. These resonate immediately with the arched windows, and both carry with them a long list and weighty history of connotations – of establishment, security, spirituality and the fragility of them. On the flip side, they speak of political and ideological devices of control. In this regard, Latin titles of the works are another point of interest: the clash between the authority of the ancient language and the English translations signpost the common problem that devices of control are disconnected from the people they are designed to govern – the people on the streets.

The voices of those very people allow the work to function as a re-presentation of the street itself. Over many years of exploration, Faith has accumulated masses of reference material – phrases scrawled on the walls of abandoned buildings, illustrations under bridges, political slogans on structures in city centres and on roadsides. Faith is deeply connected to these environments through her interactions with them – in her street work she is a commentator who, alongside others, draws attention to alternate realities on the streets. In her studio work she acts as a medium, bringing the voices of those commentators into a different context, for consumption by a different audience. All the text that does not carry Faith’s signature style has been lifted out of photographs and incorporated into the work exactly as it originally appeared. Other “real” elements are newspaper cuttings and signs out of taxi ranks, which enhance the sense of grit and grime.

Faith’s sensitivity to the environments through which she moves (and to which her gallery audience most likely does not even has access) allows her to present traces of suffering and violence without sensationalising the very real positions of the anonymous characters that emerge in her work. This evident empathy also allows those traces, within the work as a whole, to function as signifiers of existential struggles that may be raging within every onlooker. 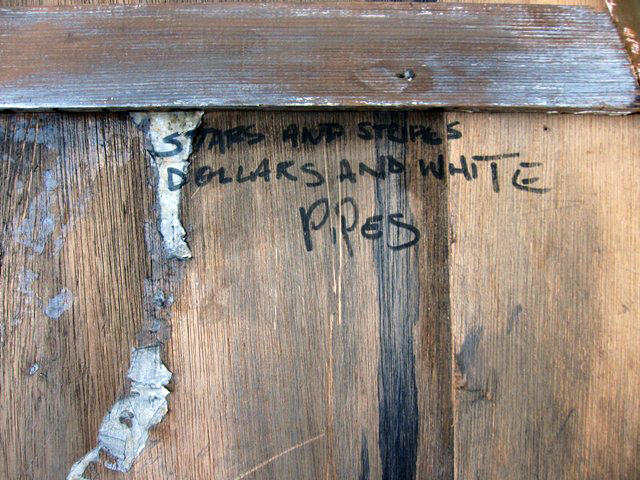