The title of this series – Main and Kruger – is the address of an intersection where the redevelopment of a residential building, called The Craftsmen’s Ship, is currently underway. The building is part of Maboneng precinct (an urban development project on the east side of Johannesburg Central) and is set to be completed in July 2016.

Public and urban artist Stephen Hobbs is involved with the redesigning of  The Craftsmen’s Ship. The name is a nod to his fascination with World War I dazzle camouflage (found on battle ships) and references a nearby inland container port, which is the biggest in Johannesburg.

Since the official end to apartheid in the mid-1990s, Hobbs has been gripped by construction sites as physical embodiments of social change. He takes particular interest in observing orderly details within these seemingly chaotic spaces from which order (a building) emerges.

Hobbs has closely observed Johannesburg’s built urban environment since the mid-1990s and has subsequently made art in response to his observations.

Over the period of a year (2014-2015), he designed Main and Kruger in response to the construction process of The Craftsmen’s Ship. Hobbs’ regular visits to the construction site combined with the close proximity of the DKW print workshop would inform and support his attitude to the printing process as both construction site and etching plate evolved. The prints are studies in mark-making and serve as preparatory work for murals, landscaping and pool designs for The Craftsmen’s Ship. 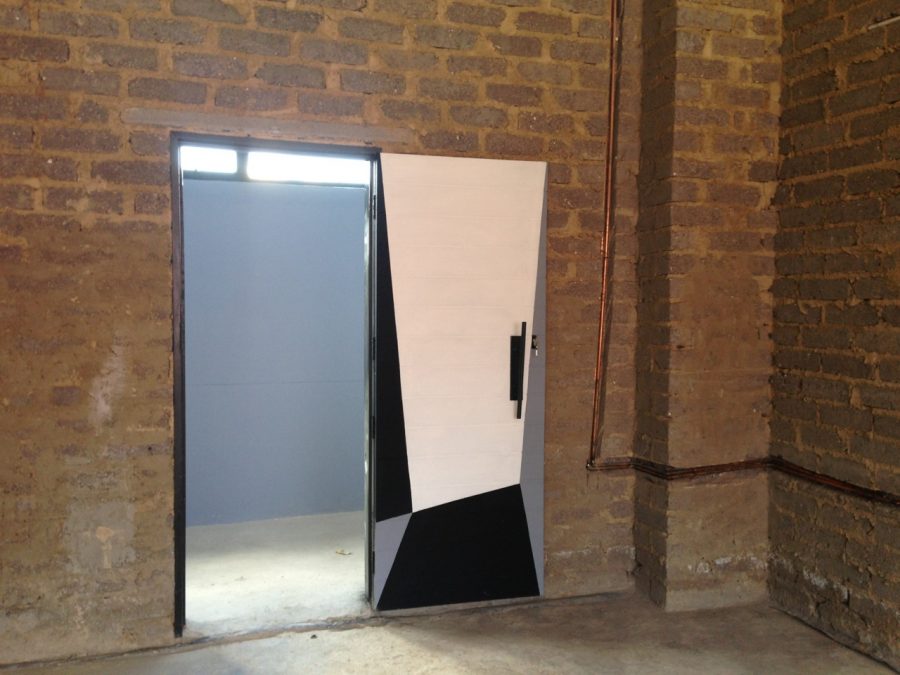 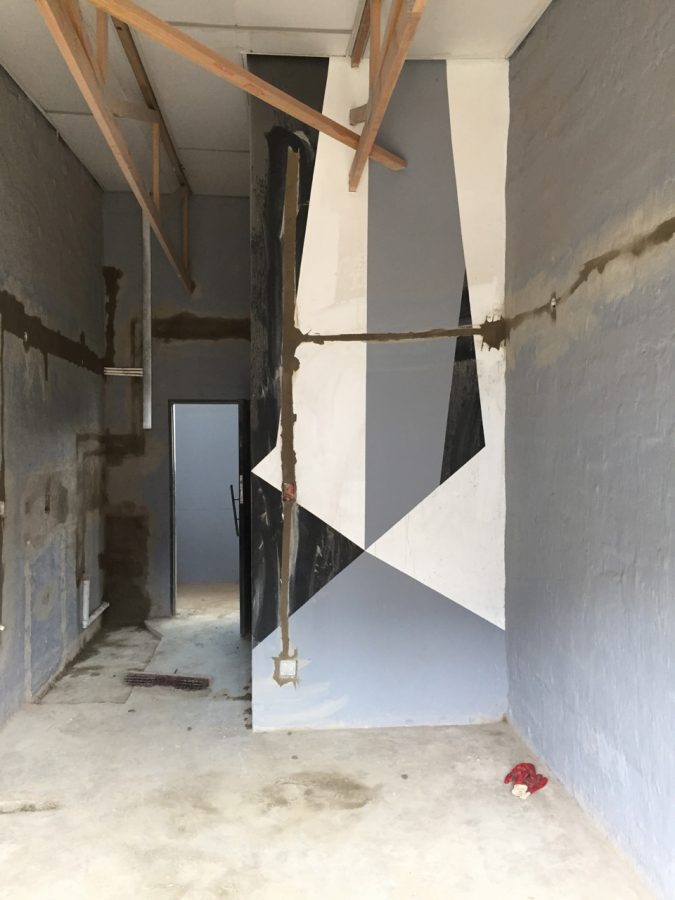 Hobbs observed the culture of workmanship on the construction site, which he describes as “a fascinating combination of highly structured and often improvised” – an approach which he adopts towards making art.

In this vein, Main and Kruger is a visual freestyle of this building process, offering up architecturally clean lines juxtaposed with more chaotic, random marks, as a reflection of what Hobbs witnessed with each site visit and inspection.

Main and Kruger is a meditation on process. The series is an ode to the poetic parallel between the etching process and a construction site. Stephen Hobbs plays with the idea that acidic erosion – the literal, physical destruction – of the plate results in the creation/construction of an image.

Main and Kruger is displayed according to the chronological order in which it was made. Reading from left to right, it contains a narrative whereby contrasting concepts of destruction and construction are explored as intertwined processes and “each print is its own mark-making event” (Hobbs).

Hobbs integrates the functional, architectural lines as they were marked out on the construction site, including demarcations of electricity cables and pillar erections, and re-appropriates them as intricately etched marks with aesthetic appeal.

In the fifth Main and Kruger prints, Hobbs spun the etching needle to create a detailed, sketchy effect which is imitative of the piles of rubble in the site (see images below).

“The oblong shape, clearly seen in Kruger V, which travels across the vertical of the print, came from an imagining of a large construction tract. The scratchy sphere shapes reference the demarcation for columns to be erected on The Craftsmen’s Ship site. I turn these highly technical construction lines, which are intentional and functional, into something aesthetic both in my memory and in my rendering” – Hobbs. 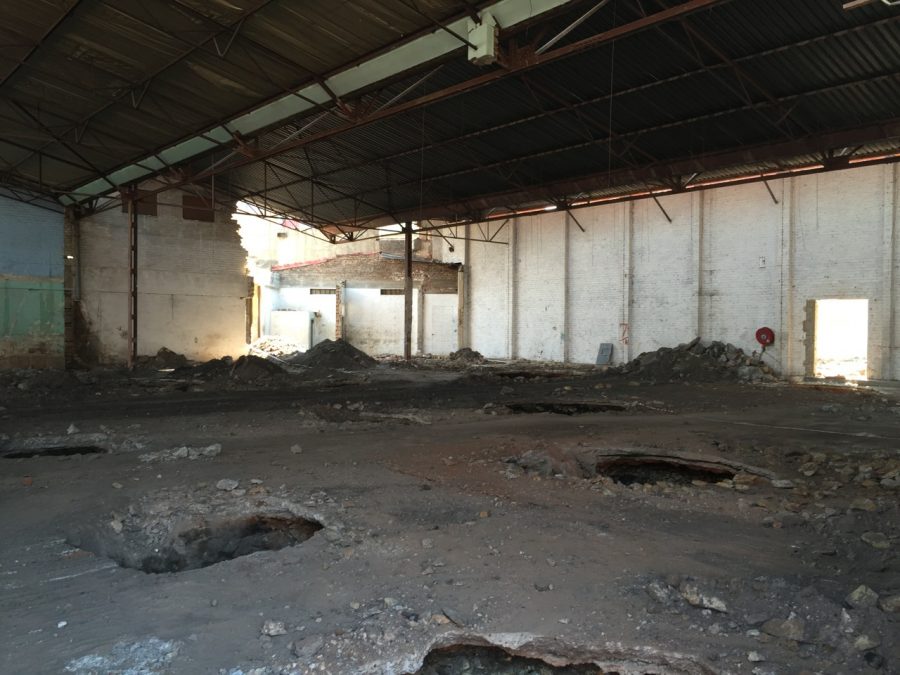 The saw-toothed line seen in the top left hand corner of the etchings portrays the zig-zagging steel trusses supporting the saw-toothed profile of the main building roof:

Main and Kruger was printed using inverse processes: Kruger I-V was made by wiping the plate so the ink filled the indented lines and Main I-V was done by rolling the ink across the surface of the plate so it could only reach the areas surrounding the lines.

One can map a gradual progression of marks across the first four prints of Main and Kruger, taking the form of simple, architectural line and grid work. But there is a noticeable jump in the progression of detail in the fifth Main and Kruger prints, which are loaded with line, tone and texture.

For the fifth prints, Hobbs considers a scenario whereby “the plate becomes so heavily marked that it obliterates itself”. He is also keen to reflect the building process in its myriad of stages – from unfinished to the building in a state of decay and depreciation.

Hobbs sees his art to be in a constant “state of becoming”. He emphasizes that, although Main V and Kruger V appear as the last prints in this series, they are part of an ongoing project. During the printing process, he treated the etching plate “like a construction site” and plans to transform it into an object in its own right by subjecting it to further destructive/constructive processes.

As a reflection on the gap noted by the visual distinction between the state of plate IV and plate V, Hobbs experimented with state proofs, adding a range of new materials and marks to the proofs. The combination of welding burn marks, acrylic paint, spray paint, builders chalk line and added notes reinforces his idea of the etched image as a process of construction in its own right.

Hobbs is experienced in the construction field and likes to draw parallels with the nature of programming a body of prints in the workshop where similar conditions determine the nature and quality of production. He finds building sites to be “heavily influenced by design readiness, programme delays and completion deadlines, cash flows and goodwill in the project management process.”

Hobbs started Main and Kruger in 2014 when he made work towards his DK Cape Town exhibition, Permanent Culture (2015), which showed later that year at DK Johannesburg under the title, Permanent Culture at 1800 metres. The series has also shown at the Johannesburg Art Fair, 2014. The prints were made in collaboration with David Krut Workshop, Arts on Main, Johannesburg.