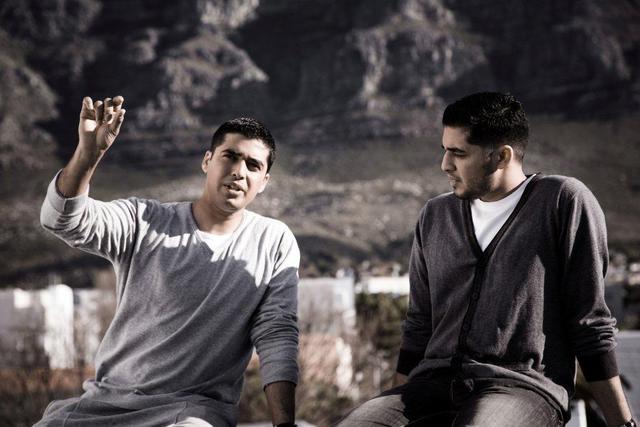 Matric art students were treated to a rare and informative talk by the 2014 Standard Bank Young Artists, Hasan & Husain Essop. The event took place at David Krut Projects at the Montebello Design Centre in the form of a panel discussion. The intention was for the students to get a direct understanding of what it means to be a contemporary, practising artist in South Africa in a 21st-century context.

Hasan and Husain have been collaborating with each other since their graduation from the Michealis School of Fine Art in 2006. Their work has been shown in the Havana Biennale in 2010, the ABSA L’Atelier competition in 2008 and the Powerplay group show at the Goodman Gallery in 2008. They have also had two solo exhibitions at the Goodman, Halaal Art in 2010 and Remembrance in 2012. Much of their art investigates multi-cultural clashes between religion and popular culture. Each photograph reflects two personalities in a battle between moral, religious and cultural influences.

The twin brothers started the talk by sharing their background. They grew up in a part of Cape Town that was sectionalised only for Indian and Coloured people. There were very few opportunities for them to study art and the school they attended was the only one that taught art as a subject. Coming to Michaelis was a huge step and they needed to learn skills quickly in order to keep up. Many of their peers had received a superior arts education and came far better equipped. The twins took this challenge as an opportunity of learning, approaching projects with open and invigorated minds.

Much of their motivation to produce art arises from the opportunity to travel to new places. Their art has taken them to a number of exciting locations. These locations become sites of inspiration, and provide them with a new canvas to share a story.

The twins were very specific about telling the students that their work aims not to be documentary. They try to recreate dialogues by capturing spaces and re-integrating themselves into the images. It is a time-consuming process since each figure must be stitched into the setting individually. The artists also discussed ethical issues. They have been very sensitive to the fact that some photography has the ability to objectify its subjects. By using themselves as the subjects, Hasan and Husain drift away from this problematic ‘grey area’.

Technical aspects of photography were also touched on. The artists explained how they take panoramic photographs. 400 images are taken and then painstakingly stitched together into one massive landscape photograph. In response to a student’s question the brothers spoke about their collaborative relationship and how through disagreement they find answers. In each other, they always have someone close at hand to be a sounding board for discussion and criticism. In the future they do plan to have solo exhibitions, even though they are known as an artistic partnership such as Gilbert and George. One would imagine that the work one twin produces on his own would nevertheless compliment the work of the other.

Right now they are frantically busy with planning and conceptualising their Standard Bank exhibition that will tour all over South Africa, beginning in Grahamstown for the National Arts Festival in July 2014. Whilst they plan to extend their earlier concepts, the pair needs to evolve and grow their themes, hopefully producing a body of work that is refreshing and convincing.