David Krut Projects is pleased to present the limited edition artist’s pop-up book which will be showcased in Stephen Hobbs’ new solo exhibition, Be careful in the working radius, on show from 30 May – 13 July.  The edition of twelve handmade books forms part of a new body of work produced in collaboration with the David Krut Print Workshop and visiting U.S. book artist, Ingrid Schindall.  It functions as the binding work of the exhibition, encompassing Hobbs’ conceptual practice of engaging the field of architecture as a site for visionary thinking.  The book itself is a form of paper architecture, containing three-dimensional pages that provide a visual link to structures referenced in Hobbs’ work.

The black-and-white book-object consists of ten double page spreads, six of which reveal pop-ups of varying movable mechanics.  Pop-up books have been in existence for centuries, and were historically used in scholarly works of anatomical and astronomical sciences.  It was only in the 18th century that these paper engineering techniques were applied to books designed for entertainment, particularly for children.  Whether the technicality of a pop-ups is rudimentary of sophisticated, there is nonetheless something of a childlike intrigue in the act of turning a page and activating that shift from a two-dimensional plain to a three-dimensional structure.

A wonderment at the mechanics of Hobbs’ pop-ups and the intrigue of “the miniature”, together with pages of varied patterning and optical illusions, invite an absorptive process of looking.  The book includes found text and handwritten mind-maps, stylised networks and city grids, scaffolding and empty billbaord structures, blocked patterns and dazzle camouflage – a zebra-like pattern used particularly on gunships in the early 1900s to fragment the visual field of enemy sites in combat situations. Although dazzle patterning became obsolete after World War I, Hobbs has mined the potential that visual deceptions present for aesthetic reflection on the dystopian city, and in this case highlights the complex and abstract nature of processing information in frenzied urban environments.

The technical production of the book was managed by Ingrid Schindall, a printmaker from Baltimore who specialises in book-binding, and took place over a period of approximately three months.  The page designs are an extension of the editioned and unique works Hobbs has produced in collaboration with the David Krut Print Workshop, and were silkscreen printed in the studio by the production team.  Parts for the pop-up pages were meticulously cut out by hand and finally assembled and bound.  Besides the use of an industrial guillotine to trim the page blocks to a standardised size, the books are entirely handmade.

As both a book and arts publishing organisation, David Krut Projects values the connection between book- and art-making practices established through this project.  The coming together of artists of distinct – though not entirely dissimilar – craft and cultural context resulted in a dynamically creative relationship.  This kind of inter-disciplinary and international exchange – consolidated here in the form of an artist’s book – is a new and important collaborative endeavour for David Krut Projects, and hopefully the first of many to come.

Book printed by hand on Velato Avorio paper – 200gsm for pop-up pieces and 280gsm for silkscreen spreads.
Silkscreened with black waterbased ink for all spreads but one – printed in  a black+transparency for gray.
Solely glue binding and no sewing (bound the same way as the “jungle” book binding technique).
All pages but one are glued together with archival glue, one spread is taped together using double-sided archival framing tape.
Cover is Irish Linen book cloth silkscreened with opaque white water-based silkscreen ink.

Silkscreen printed by Ingird Schindall; assisted by Chad, Luke and Neo
Production and assembly: Charlotte Johnson, Karena Liebetrau, Tanya Sack, Kate Arthur
Much thanks to Alan Jeffery at Brenthurst for his assistance with providing information, sourcing materials and use of his studio. 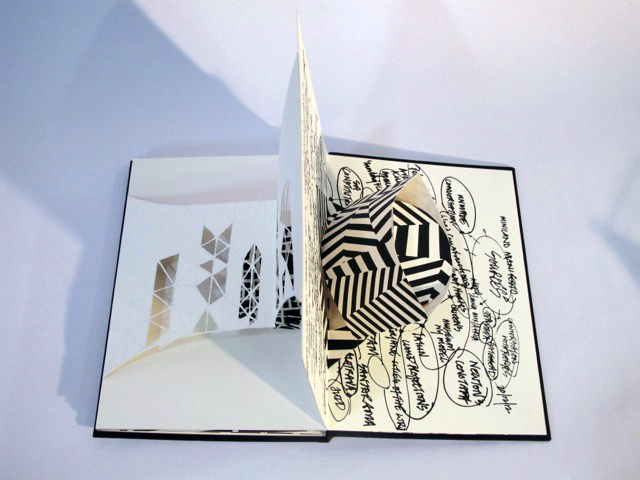 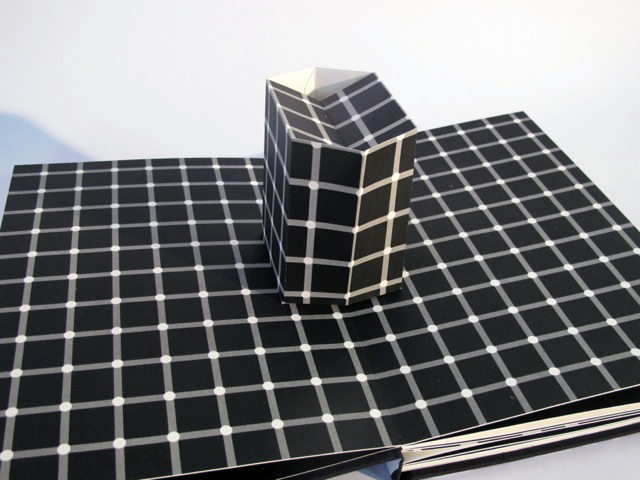