Earlier this year, Diane Victor spent a few days creating new lithographs with Mark Attwood at the Artists’ Press print studio in White River, Nelspruit. At the same time, she was also preparing for the upcoming exhibition as the featured artist of Innibos; the annual arts and culture festival in Nelspruit (27 June to 1 July 2011). All artworks, including the group shows and an installation by Gordon Froud, were exhibited in the Nelspruit Civic Centre. Victor’s works on the festival included an ongoing series of etchings Disasters of Peace, ash drawings, smoke drawings and some experimental hand drawn works to mention a few.

In addition to the featured exhibition, Victor was trying to get permission to use an abandoned abattoir as a secondary exhibition space for her latest glass works. The series of large glass smoke drawings is called Brief Lives. The idea came about while she was working at the Artists’ Press print studio. The road that leads into White River recently sprouted an eye-sore of a building; the local abattoir. It was located on the Halls Estate fruit farm, a stone’s throw from a horse riding school on the left and a working dairy farm on the right. The abattoir was finally moved out of Nelspruit to a new building in White River, leaving the old building empty. The abattoir had been a controversial subject for some time due to its location and this made it all the more difficult for Victor to get permission to use the old space. Eventually it was agreed that the abattoir was not going to be a part of the festival but could be used as a separate exhibition space.

The smoke could not be fixed to the surface of the glass; once you touch it, it is damaged. This idea is transferred onto the subjects of the drawings a lot like those of her ash drawings. The glass drawings deal with the loss of body and identity and the nature of the smoke speaks of the transience of life. Because she couldn’t see through the flame and smoke while drawing onto the glass, the images relied on muscle memory, bringing in another interesting dynamic to the medium and subject.

Once the 30 kg glass works were finally and safely suspended in the abattoir the overall effect was dazzling. At every moment of the day the light that seeped through the bars of the abattoir windows seemed to change and reflect off of the glass works changing from the bright and piercing morning light to the soft, dappled afternoon sun that left a shade of pink on each of the animal heads almost bringing them to life. The horror of the building seemed to show up in contrast to the noble expression of the gentle shade of soot and ash used to create the goats, cows and a pig in each of the artworks. The abattoir almost appeared to be peeling away from itself. Every wall looked scratched with paint flaking off and bubbling up under the surface. Many people who were weary of coming into the abattoir at first, and many who had been involved in getting the controversial abattoir moved claimed that it felt as if the space had been exorcised. The space took on a different feeling with the art there. 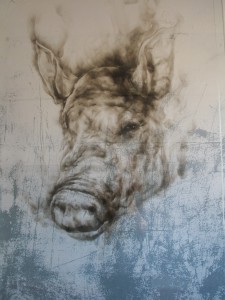 Victor is a featured artist on the Joburg Art Fair this year. Two of her glass works, shown in the Nelspruit abandoned abattoir, will be on display at the David Krut Projects booth #12.  In November this year she will be exhibiting a large selection of her work at the UJ Art Gallery. A catalogue detailing the prolific body of work she has created since the launch of her TAXI- 013 art book in 2007 will be published in collaboration with UJ and David Krut Publishing as a companion to the UJ exhibition and will follow shortly to be launched at the beginning of 2012.