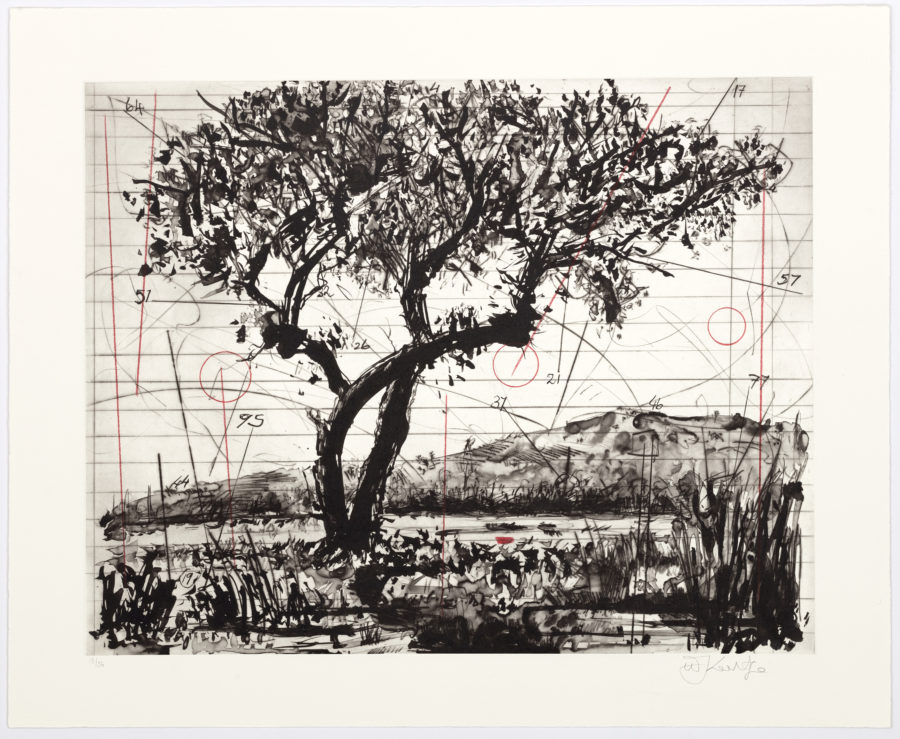 Trees have played an important role in the development of Kentridge’s artistic lexicon and have been present in his work in a variety of forms, the power of the trope ringing out in different ways through a number of Kentridge’s bodies of work.

Kentridge has spoken frequently about the influence that images and ideas of trees have had in his life, and the ways in which these have become integrated into his work. In a lecture given at Berlin Mosse in 2014, Kentridge talks of the “tree as lehrstück” or the “lesson play” associated with Bertolt Brecht’s epic genre of theatre that explored acting as a route to learning; of the reluctance of a Swedish boat builder who worked on Kentridge’s Black Box project to use German oak, because of the shrapnel contained in the wood, and of the strange sense of “trees still living holding the history in them.” In the same lecture, Kentridge ruminates on our ability to “meet the tree halfway” in our construction of meaning around it, and on the porousness of knowledge.

In another lecture, delivered as part of his Humanitas Visiting Professorship in Contemporary Art at Oxford University in May 2013, Kentridge remembers mishearing a word – tree-search, instead of t-shirt – and suddenly “in half a second, a whole etymology and history and examples of tree-searches unfolded.” In another instance of mis-heard words, Kentridge’s memory of his father working on the Treason Trial, or the “trees and tile” to his boyhood ears, has yielded innumerable metaphors for understanding the relationship between what we know and how we experience the world, piecing together fragments and fitting them together as we wend our way through the complex forest of history. In a conversation with Jane Taylor, Kentridge also recalls his frustration as a child that two white stinkwood trees at his family home in Houghton seemed to refuse to grow big enough to suspend a hammock between them, and his grief at the death of one of these trees during a lightning storm, many years later when he returned to occupy the same home in which he grew up. Over the course of decades, Kentridge has drawn out the metaphorical richness that trees offer to sense-making within his multidisciplinary practice: “a tree you could disassemble into its pages and hide in a library, like hiding a book in a forest.” The fact that Kentridge’s hometown and the locus of much of his work is Johannesburg, often called the largest human-made forest, cannot be overlooked.

Tree (17), a direct gravure print with drypoint and pencil on gampi chinecollé, takes it cue from several other trees that Kentridge has created, most notably the series of trees painted in India ink with both “good” and “bad” brushes that formed the basis for works in the Universal Archive series of linocuts from; the large-scale multi-sheet trees, Lekkerbreek (2012) and If you have no eye (2013), that paved the way for making further work on an imposing scale by piecing together different elements of an image into a whole. This is most recently achieved in the series of monumental woodcuts, Triumphs and Laments, the blocks for which were created using the wood of a number of species of tree to achieve a variety of prospects in terms of woodgrain within the printed mark.

In Tree (17), the landscape surrounding the image of a small tree is carved up and annotated by pencil marks in red and grey, featuring numbers, lines and shapes, like notes on a map. These marks within the landscape invite an interrogation of the process of making sense of the world, of personal and political histories, and the different layers of understanding that need to be considered in order to achieve any sense of clarity, which ultimately dissolves and must be reconfigured with each new piece of information that comes to light.