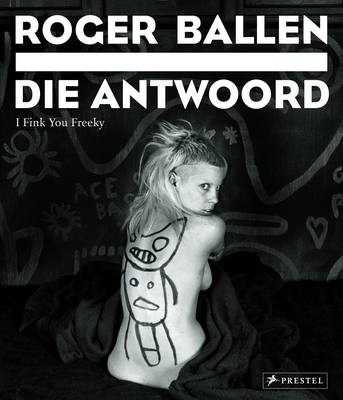 Art photography meets popular culture in this behind-the-scenes look at the making of a hugely successful music video by musicians Die Antwoord and photographer Roger Ballen.

With more than 25 million hits and counting since its uploading on YouTube in 2012, “I Fink You Freeky” has brought its director Roger Ballen, and its subject, rap group Die Antwoord, into the zeitgeist of young people around the globe. Shot in black-and white and featuring imagery, scenes, and subjects from Ballen’s stunning photographic work, the video, with its infectious beat and Die Antwoord’s ingenious blend of hip-hop, rap, and rave, has been a huge critical success. This book features the brilliant photography that inspired the collaboration between photographer and band, and shows how Ballen’s images became part of the finished project. In addition, shots from the filming of the video, and of band members in rehearsal and on the set, offer a fascinating glimpse of synergy in the making. Introduced by art critic Ivor Powell, this volume also features an interview between Ballen and the members of Die Antwood.