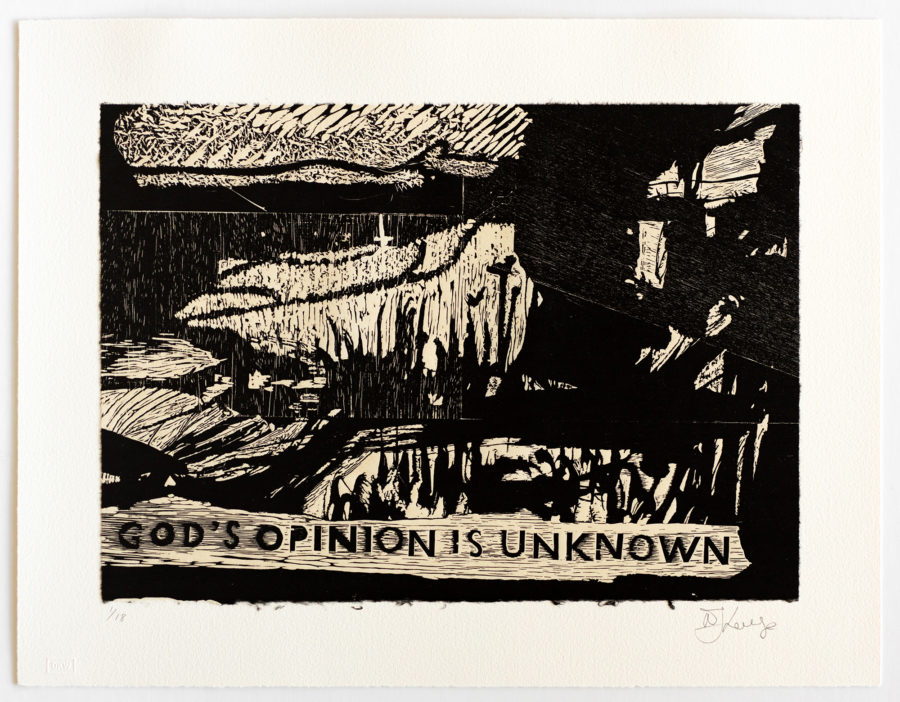 As a way to celebrate the completion of the Triumphs & Laments Woodcut Series, William Kentridge approved the editioning of one single block from each of the multi-block images that make up the Refugees diptych – the last print to be completed. For each of these small-scale prints, which celebrate the complexity of woodblock editioning, a block containing text was used, resulting in the correspondingly-titled prints God’s Opinion is Unknown and Leaning on Air.

The text, “God’s opinion is unknown”, comes from  Sol T. Plaatje’s Sechuana Proverbs, published in 1916, that contains 732 Setswana proverbs, their translations, and their ‘European equivalents.’ The text also featured in Kentridge’s 2018 theatre production, The Head & the Load, which aimed to generate a process-led understanding of the relationship between the First World War and colonialism in Africa. The inclusion of this text brings the focus back to Kentridge’s homeland, and also to his own sense while growing up in Johannesburg that he was constantly looking to Europe and the great cultural achievements, the green wooded landscapes, and feeling as if he existed somehow on the periphery. Furnished later in life with a fuller and more layered understanding, constantly evolving, of history and its gaps, this perception of missing out becomes more complicated.

God’s Opinion is Unknown is printed onto a single sheet; Leaning on Air uses two overlapping sheets of paper, which are then attached to a sturdy backing sheet using a similar hinging technique to the one employed for the Universal Archive series of linocuts. Both prints have been made using Kitakata, a very fine gampi paper from the Philippines, the deckle edges of which are left intact and printed over. The deckles are visible at the bottom of each print, emphasising the way in which the works float on top the backing sheet, having been hinged only at the top.