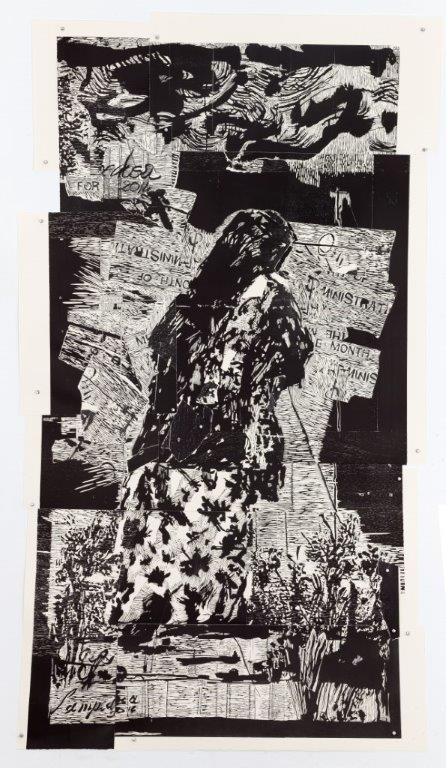 Lampedusa is the third print in the Triumphs and Laments Woodcut Series. While the second print, The Flood, hints in a roundabout fashion at the issue of mass migration of people to Europe and the strife encountered along the way, Lampedusa follows up by confronting the issue head-on. Kentridge chose as reference for this work a media image of a group of Eritrean widows taken during a memorial service held in Levinsky Park, Tel Aviv in late 2013. The service was in memory of the victims of a shipwreck off the Mediterranean island of Lampedusa on 3 October 2013 of a fishing boat that left Libya carrying more than 500 refugees from Eritrea, Somalia and Ghana. In the Triumphs and Laments frieze on the Tiber River banks, three widows are featured – Women weeping for a Lampedusa Shipwreck – but for the print Kentridge chose to hone in on just one of the figures seen from the back, as if walking away from the viewer, her body bent forward in grief.

The European migration crisis, or refugee crisis, refers to an ongoing calamity that sees millions of people – many of them asylum seekers fleeing from areas of conflict in Africa and the Greater Middle East – crossing the borders of the European Union in hopes of a better chance at a peaceful life. In response to this influx many European countries, including Italy, imposed stringent border control protocols, which resulted in asylum seekers pursuing routes into Europe on overloaded boats across the Mediterranean. The Mediterranean migration route is considered the deadliest in the world owing to the high death toll recorded among those seeking refuge. The migration crisis in Europe has been matched in scale only by the mass evacuation and forced displacement associated with ideological hostility during World War II. From one perspective, an inherent psychological irony exists in the idea of people from colonised territories, many of whom suffered for generations under intolerable conditions imposed by their European colonisers, fleeing to Europe as a safe haven.