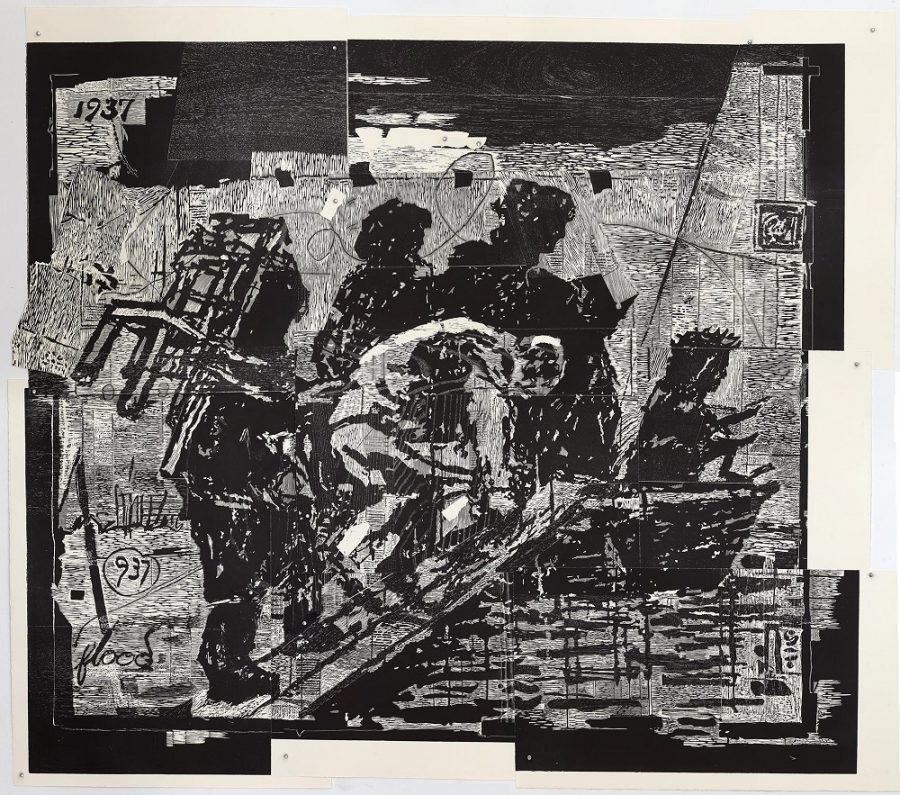 The Flood is the second print in the Triumphs and Laments Woodcut Series. The image of The Flood is inspired by a photograph of people seeking refuge from the flooding of the Tiber River in 1937, the last major flood that inflicted devastating effects on the city. For hundreds of years, the Tiber broke its banks quite regularly, with areas of the city being ravaged by the flooding. A series of engineering feats were pursued over the centuries, to lessen the impact.

The reference in The Flood is quite specific, indicated by the inclusion of the date – 1937 – in the print. During his research towards the Triumphs and Laments frieze project, Kentridge came across a fact that startled him: the ghetto in Rome in which the city’s Jews were segregated until 1870 was not built, as he had first thought, during the Middle Ages. In fact, the ghetto originated in 1555 during the late Renaissance, a time associated with progressive social change and some of the city’s greatest cultural achievements. The Ghetto of Rome was built in an undesirable area of the city, being one of the lowest-lying, and was therefore often hard-hit during times of flood. As the waters rose, people were forced to flee, rescuing what they could before their homes and places of work were submerged. However, the figures climbing into a boat with their worldly belongings on their backs are also redolent of the many thousands of “irregular immigrants” that have made perilous journeys across the waters of the Mediterranean to Europe, in order to escape strife in their own countries. In this way, the image forms an arching narrative of relocation, drenched in a sense of disenfranchisement as a result of governing policy.