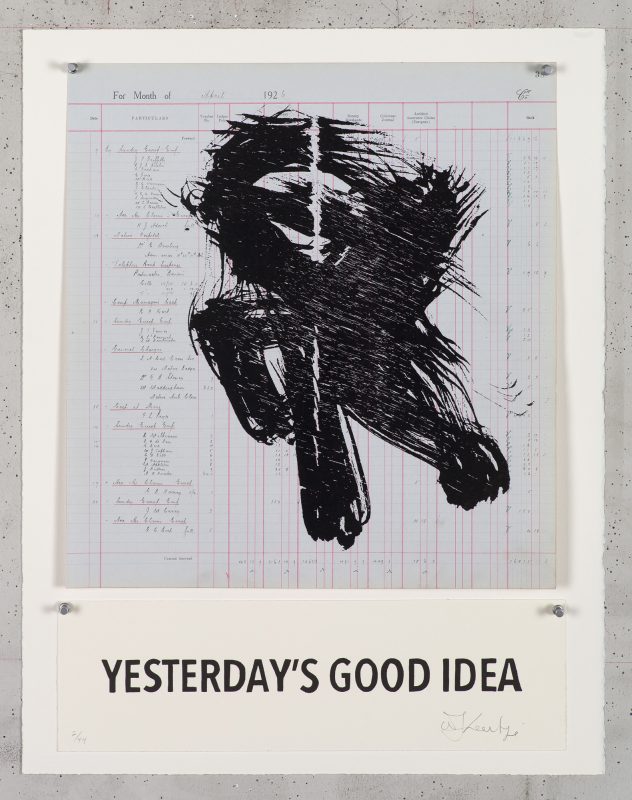 This print was originated as an accompaniment to Kentridge’s major exhibition, Thick Time, at Whitechapel Gallery in London in 2016. The edition is drawn from two separate projects he was working on at the time. The ink splash is from work on his production of Alban Berg’s opera, Lulu, and the slogan from Notes Towards A Model Opera, a film that formed the centre-piece of his first retrospective exhibition in China, and which delved into aspects of the Chinese Cultural Revolution.

The Whitechapel Gallery has provided the following insight into the inferences of the image:

“The ink splash recurs frequently in Kentridge’s work, both animated in his films and in his works on paper. For Kentridge, gesture acts as narrative. Always monochrome, the mark is a character from traditional Chinese calligraphy, an expression of zen mindfulness, or the distraction of spilt coffee.

Kentridge often uses repositories of information like dictionaries or encyclopaedias as the background for his prints and drawings. Printed onto individual pages of ledger paper, dated from the 1920s, each work is subtly different and features minutiae of calculations, marking the slow progression of advancing time.

Kentridge’s epigrammatic slogans recall those used during Chairman Mao’s cultural revolution to stir the masses to thought and action. Typically serious and playful, Kentridge’s edition mingles the absurd with the coherent; the incongruity of the ink splash, reproduced as a carefully printed woodcut, the ledger notes quietly asserting exactness, with the lament for “Yesterday’s good idea”.”

Yesterday’s Good Idea is printed on ledger paper from a cashbook titled Distribution of Mine Office Cash which is dated 1925. Each sheet of ledger paper in this edition is unique and varies in each collage.