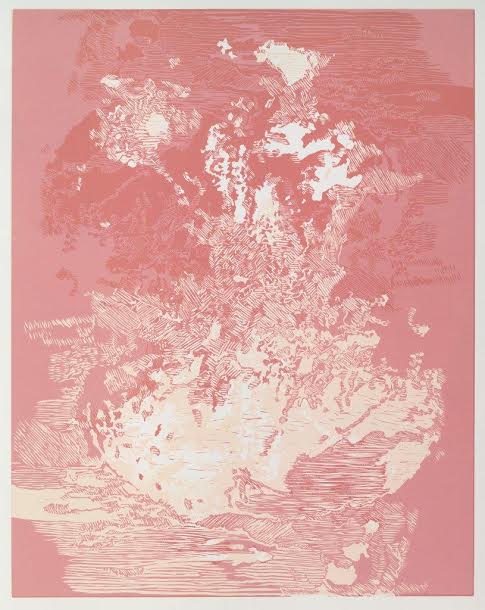 “Something interesting happens to our experience of time when we look at the sky or at the ocean. At a glance they are static and unchanging but after an interval they are transformed entirely. It is this interval that is one of the main foci of Penn’s work that she explores through repainting the same cloud in similar as well as different scales and techniques. But it is also a period that is elusive and resists pinning down. Through re-painting and repetition, the interval in Penn’s work starts to describe the kind of minute and slow changes in nature that hold us in rapt astonishment when speeded up in a time lapse sequence. Such a focus on these tiny increments of transformation can be seen as a rejection of the narrative of the transformation (this changes into that) in favour of the process of alteration itself. In our own every day experience of time, cloud and sea change slowly but instead of speeding up time to make the changes clearer as in a time lapse movie, Penn calls a halt and situates herself in the space between transformations. In this liminal space the addition of only slightly differing images has the opposite effect and works to expand and slow down time.

To paint an echo, to slow the clouds, Penn’s work can equally be seen as an attempt to hold back chaos and entropy as the careful study and immersion in the natural processes of transformation and dissolution.”

I cut the Hiroshima atom bomb cloud in lino in 2011. I was working on a series of mono prints and oil paintings with images of various clouds – atomic bomb clouds, implosion clouds, volcanic ash clouds, storm clouds etc. Clouds appeared as subject matter and as metaphor for daily distractions; clouds added to a landscape, real and figurative. The lino-cut was set aside and wasn’t editioned at the time. Re-visiting the lino in 2014 I wanted to push the ironic beauty of the image. In the era of the television and YouTube I am interested in how visual representations manipulate our understanding of reality. I am interested in Magritte’s ideas about the treachery of images, when our models of reality become confused with reality itself. These ideas are given life by abstracting the image through repetition and fragmentation. Having completed one edition Ceci n’est pas un nudge, I am re-working this plate again to print a new edition.