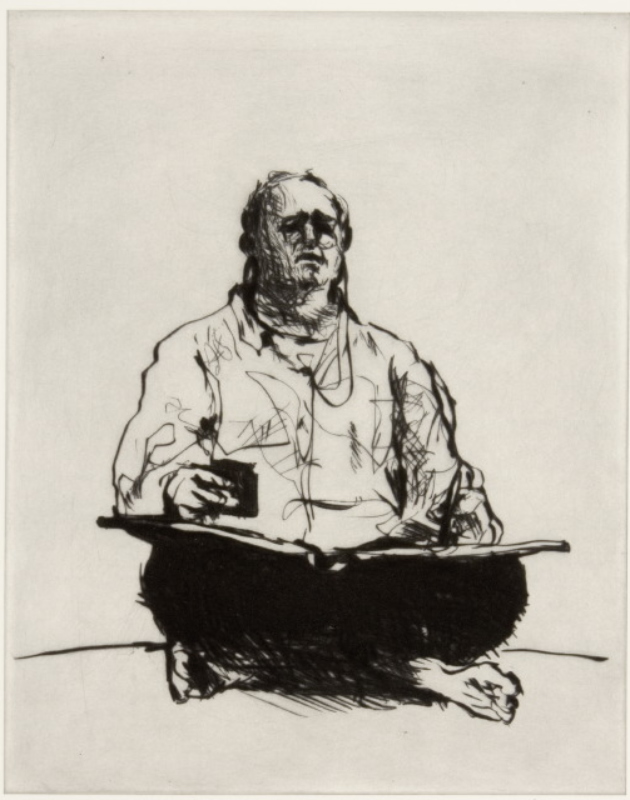 Scribe is an etching which arose from the body of work that William Kentridge did on a project for the Louvre Museum in Paris in June 2010. Carnets d’Egypte (Egyptian Sketchbooks) was the name of the exhibition, which included 16 short films shown in the Egyptian Collection Wing. Some of the images that Kentridge made, both in film and in drawings, were of the Scribe.

One of the short films, titled Scribe, involves the silent interaction between two scribes,  both played by Kentridge, and the Scribe imagery was adapted in various works. This image is drawn from an instance in which the artist, adopting the position of the Scribe, recites Percy Bysshe Shelley’s famous poem Ozymandias ­– an ode to Ramses II.

The etching was originated by Kentridge on a single copper plate at David Krut Workshop (DKW). Other images relating to the Scribe were photogravures and charcoal drawings on multiple pages. Ancient Egypt is a theme that first appeared in Kentridge’s work in 2004 in preparation for his staging of Mozart’s comic opera, The Magic Flute.