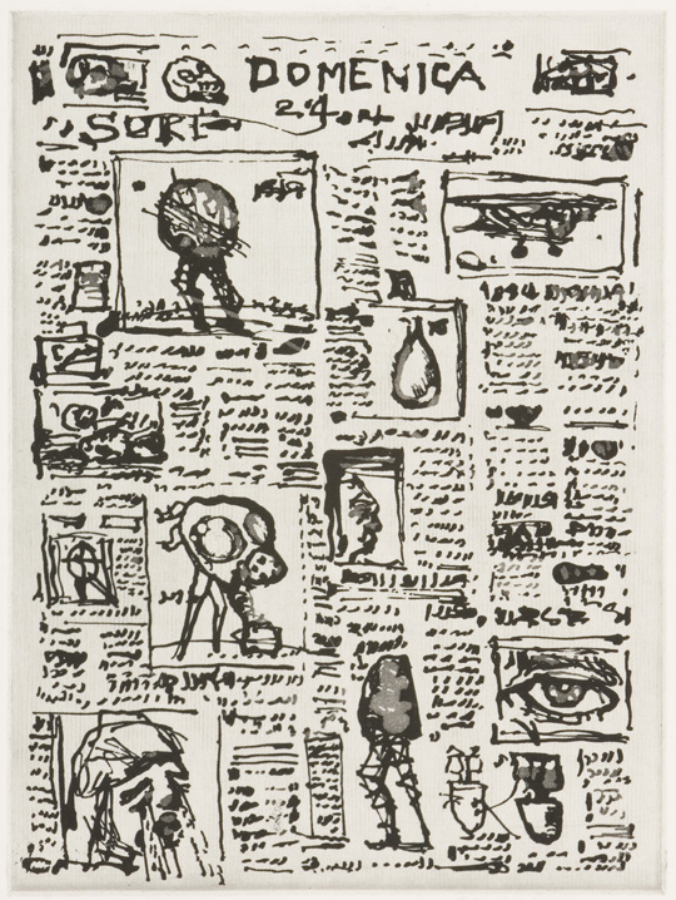 This set of images stands out as one of the most recognisable iconographic markers in Kentridge’s career. The five images in the L’Inesorabile Avanzata suite began as drawings commissioned by the Olivetti Foundation and published over five consecutive weeks in the cultural supplement of the Italian newspaper, Il Sole 24 Ore. The images refer on the one hand to Italian art history – The Massacre of the Innocents by Giotto di Bondone – and on the other hand to more contemporary Italian history, particularly the war in the 1930s between Italy and present-day Ethiopia (then Abyssinia).

Massacre of the Innocents opens the series with a study of Giotto’s anguished mothers from the Arena Chapel fresco of the New Testament event. The title of of this work clearly points to Kentridge’s stance against colonialism, domination and exploitation. This print, and the second and fourth works in the series use an appropriated newspaper format, fragmented to suggest pictures and text columns and interspersed with snippets of imagery. In Newspaper Unread, Kentridge draws his own eye staring out at us, as a witness and chronicler of the events unfolding around him. Cameos of his own gas mask and sextant images, and quotations from Picasso’s weeping women are cropped and scattered throughout the implied blocks of text.

The central work in the series, Mal d’Afrika, is a foreboding augury, a gas mask on pylon legs with a wizened old elephant’s eye gazing desolately from behind his goggles to prick our consciences. Kentridge draws comparisons between the atrocities committed in the Italian Fascist invasion of Ethiopia 1935/1936, the inaction of the League of Nations at the time, and our own observance of the genocide taking place in Darfur at the time of making the drawings.

The series closes with The World, a weary metamorphosis of the gasmask into Atlas carrying the weight of the world on his shoulders, a classic Kentridge image of a burdened figure in profile, rickety pylon legs striding across the landscape. The reference to the world walking on stilts, the gas mask on its hind legs, and the newspaper articles, emphasise the immediate and ongoing political and socio-economic consequences of the conflicts, repressions, struggles and ecological disasters imposed by a power from one continent on another.

In the recent exhibition catalogue of Kentridge’s major retrospective of drawings at the Zeitz Museum of Contemporary Art Africa in 2019/2020, the L’Inesorabile Avanzata series took a prominent place as one of the 15 themes that highlighted his oeuvre and the chronology of his work.