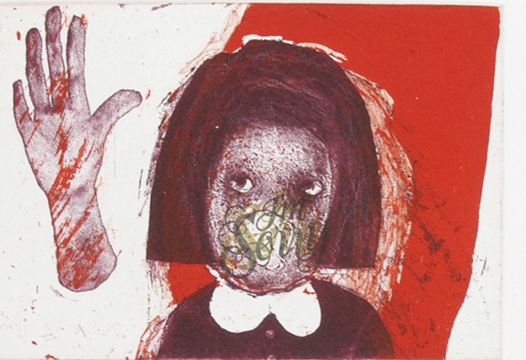 This series of prints is part of a larger body of work (paintings and installations) on the idea and experience of ‘Shame’ as both a public phenomenon and a psychological condition.

Shame is part of conflict, and current global conflicts have reinserted a sense of shame onto the public stage. Witness the recent abuses in Iraq! But however powerfully shame is recognized and represented; it has neither a single face nor a common language. It exists rather in fragments – in the cultural detritus left over from unexpected trauma, and in the imagined spectres of fear, loathing, loss and fright which surface in our visual cultures in the wake of traumatic woundings.

Shame involves psychological nakedness, exposure, humiliation, hurt, guilt, and deep embarrassment. When shamed, we lose our dignity and integrity in full view of others – we live in a state of disgrace. But there is also another dimension of shame that interests me; in its deepest despair shame may offer us the potential for empathy. To feel shame is perhaps a condition for recognizing the shame of others. This ‘other side’ of shame is emblematised for me in the particular way the word shame is used colloquially in South Africa as an expression of sympathy for, and identification with, someone else’s public pain. If you should fall in the street people, for instance, might exclaim shame or cry out sorry, even though they are not to blame for your fall. The Afrikaans version of this crying out at hurt is siestog, tellingly translated as a mixture of disgust (sies) and pity (tog).

In the recent South African past, shame has been dramatised and confronted as a state of hurt and complicity in the hurt of others. Our Truth and Reconciliation Commission (TRC) staged this hurt and complicity in public shows of shame, expressed in the languages of human suffering, apologetics, confession, protestations of good faith, exposures of bad faith. After this historical moment all sorts of urban legends have emerged which bespeak the state of shame, legends connecting the most public of political events to the most private and intimate of individual experiences.

This series of prints images ‘shame’ as an amalgam of figural and textual forms. The seriality is less about conveying narrative than it is a way to register emotion as a set of concretised image associations. For me the text is as much a trace of feeling as the marks and colours shaping the figuration. Made from ‘craft’ rubber stamps the words reflect fabricated emotion – clichés masquerading as real feeling – but this sweetness becomes bitter when these words are juxtaposed with violent figuration. Repeated and over-laid excessively, the words might lose linguistic coherence and become physical manifestations of the kind of broken speech associated with trauma. When stamped into figuration of manifest pain, they can read as flesh and blood, bruises and scars, beatings and torture. The figuration refers to a child’s body. It would be hard in South African today not to see in this a reference to the current prevalence of child abuse in our country and the shame associated with this abuse. But imaging the child is also a way to mark shame more broadly, as a deep psychological condition manifest in the early development of ‘the self,’ and to which we, as adults, seem destined to return in our quest for identity.